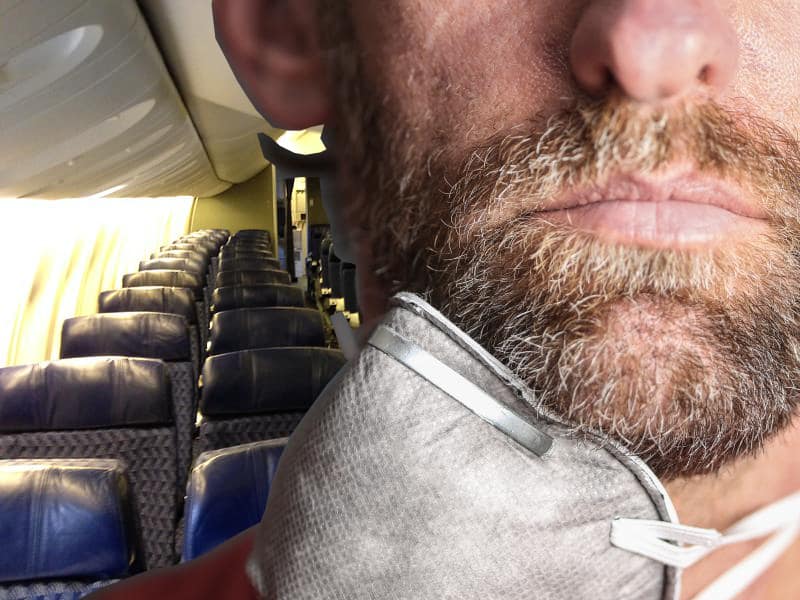 So Now What Happens If You Refuse to Wear a Mask on a Plane? New Rules for Air Travel as of February 2nd, 2021

It took a while, but as of February 2nd air travelers finally got an extra measure of assurance that air travel needn’t be a death sentence for them or their loved ones. What had been a patchwork of airline policies requiring compliance with masking requirements became a federal mandate with the force of law in the United States. From now until at least May 11th, passengers must wear masks or face the consequences. So now what happens if you refuse to wear a mask on a plane?

First, you won’t get past TSA screening. TSA now requires individuals to wear a mask at TSA airport screening checkpoints. If you refuse, you won’t be admitted into the secure area of the airport, the place where the gates are.

Next, if you pull your mask off and go strolling through the airport, you will be given a stern warning. Then if you refuse to comply you may be subject to civil penalties.

What are Civil Penalties?

If you want to protest wearing a mask now, you’d better not do it on a plane.

This is the real game changer in the new masking mandate. Up until now your refusal to wear a mask was a violation of each airport’s civic code and/or each airline’s masking policy. Depending on the airport’s location, the enforcement of masking requirements could be lax or non-existent. If you got on a plane and refused to wear a mask, about all they could do was restrict you from future travel by putting you on a no-fly list. In fact, they might not even attempt to remove you from the plane, as the actual law being broken was ambiguous.

Now, however, the law is clear. If you refuse to comply, you can be slapped with a civil penalty. What is a civil penalty? It is the result of civil litigation that occurs when an individual or corporation seeks monetary compensation to remedy a wrong. In other words, you could get sued.

The victims of your refusal to wear a mask now have the law on their sides.

The most likely legal concepts under which you could be sued are negligence or recklessness. Negligence occurs when someone behaves in a manner where they should have known there was a risk that some harm might occur, like refusing to wear a mask, which causes someone else to become sick. Recklessness occurs when a person knows there is a risk of harm occurring to others from their actions, but they act that way anyway, regardless of the consequences, and harm someone.

You can be sued for negligence or recklessness by another passenger if you refuse to wear a mask and they become sick. The most likely remedy would be a recovery of damages, like hospital bills, mental anguish and/or funeral expenses.

If you refuse to wear a mask and someone ends up hospitalized, watch out. You may be paying the bill.

Here’s how it could play out. You decide to be an advocate for your individual rights and defy the airlines’ requirement to wear a mask. An argument ensues. You dig in. The authorities enter the plane and remove you. You are placed on the airlines’ no-fly list and walk away thinking you have struck a blow for liberty. But it’s not over.

A passenger within six feet of your tirade comes down with COVID. She is hospitalized. Later, she is handed a bill for tens of thousands of dollars from the hospital. She contacts the airline and gets your name. She contacts an attorney and brings suit against you, claiming you exposed her to the virus. Even if, ultimately, she doesn’t win the case, she can drag you through the court system and cost you plenty of time and money.

If you refuse to wear a mask on a plane now, it could cost you dearly.

United Airlines President Scott Kirby says 99.9% of airline passengers obey in-flight rules, which is another way of saying that a miniscule proportion of passengers are causing all the trouble. These days the airlines have enough on their plates navigating the loss of jobs and revenue as a result of the pandemic. The last thing they need is an erstwhile patriot causing a ruckus, and they want it to stop.

They’ve been begging the federal government for a mask mandate since the start of the pandemic. Now that they’ve got one you’d better believe they’re going to use it. Just try throwing a fit over your individual rights on a plane now, and see what happens.

Not only will you be removed and put on a no-fly list, the airline might also sue you for the costs associated with the flight delay. If the airline had to compensate the other passengers in any way for the delay, those costs could be coming out of your pocket.

If You Refuse to Wear a Mask on a Plane…

The consequences for refusing to wear a mask on a plane or in an airport before February 2nd were trivial. Now the stakes are higher. With the new rules permitting civil penalties, the lawyers are getting their knives out. It won’t be a heavy-handed government that will come down on you, it will be individuals and corporations and their attorneys. And it won’t be a question of your rights being violated It will be a question of  you violating other people’s rights.

“What is the Difference Between Negligence and Recklessness.” Law Giant. Begum Law Group, 14 August 2019, Website

The Road to Paradise: Driving the Golden Chain Highway in Northern California

How to Get a Great Rental Car at a Low Price

I wonder what the rules are for longer flights – is eating or drinking allowed? I’m glad to see they will be enforcing mask wearing. My last flight there were people boarding with their mask under their noses.