Top Posts
Memory Metal: The Enduring Legend of the Roswell...
Unsung Beauty: A Visit to Big Bend National...
Judge Roy Bean and The Law West of...
Not the Right People: Ethnic Cleansing in the...
The View from Up Close on South Padre...
A Truth Best Forgotten? The I-45/Texas Killing Field...
A Night at the Myrtles Plantation, the Most...
A Place of Quiet Contemplation: Driving the Natchez...
Understanding Backwards: Coming to Terms with the Past...
Beside the Singing River: The Extraordinary Musical Legacy...
PennsylvaniaThe East

Naked Curiosity: Visiting a Nudist Colony in the Poconos 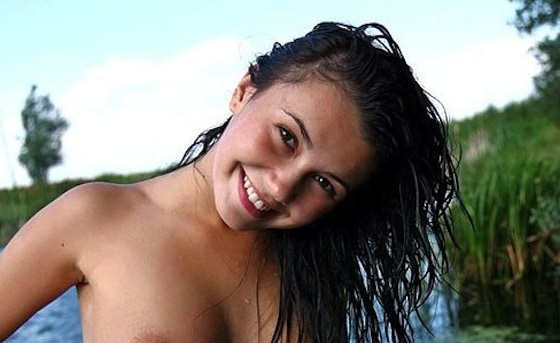 It had taken me 40 years to test these waters, but I was ready to visit a nudist colony and see what it was all about.

When I was a boy of about nine I had a sexual awakening. A friend and I were wandering along a rural road, kicking cans, throwing stones and inspecting the debris along the roadside, when we came upon a pile of discarded magazines. It was quite a find.

Those magazines were what passed for pornography in those days, cheesecake pictures of impossibly beautiful women exhibiting firm, plump breasts and coyly hiding their genitals. Among the cache was something of particular interest, a series of images of men and women playing volleyball together in the nude, barbecuing, picnicking and lighting each others cigarettes, all completely naked. I was gob smacked. I was also as rigid as a tent stake. The sudden way my youthful nether regions had jumped to life was both alarming and exhilarating. My first thought was that I was doing something terribly bad. My second thought was that I needed to get me more of this.

My youthful fantasy, a nudist colony where attractive young men and women played volleyball together buck naked.  Could it be true?

Later – I don’t remember exactly when – it became clear to me that what I had seen were images of a nudist colony. To say that I found the idea of a nudist colony titillating is like saying Bill Gates found computer programming interesting.

For many years I longed to visit a nudist colony, and… and… do what?  I wasn’t quite sure. As a youngster I had a vague idea of playing volleyball and picnicking while chatting with naked women in an effort to get to know them.

It made me blush to think of it.   The whole idea was confusing and embarrassing.  But that didn’t stop me wanting to go. I was a little kid with a big, dumb, salacious dream. Forty years later I was on my way.

Sunny Rest is like the perfect Hollywood name for a nudist colony, or a naturist resort, as they like to be called. The approach to it, driving through the rolling, wooded hills of northeast Pennsylvania, also seemed apt: rural and secluded, yet full of naked people, at once brazen and discreet. Oh, baby, this was going to be good.

Here was my dream come true, a living, breathing tableau of my earliest sexual fantasy, and I was a part of it! I boldly stepped forward.

When I pulled into the grounds of Sunny Rest Resort I encountered a groundskeeper trimming some bushes along the roadside with a dangerous looking pair of gardening shears. He was completely naked except for his mint green Crocs. It occurred to me that if I was going to wear only one item of clothing to trim shrubbery in the buff it would not be a pair of plastic clogs aerated like a Wiffle ball. One could slip. He directed me to the office.

As I pulled up to the office, I saw a middle-aged couple strolling along in the all together. I did not look at their bodies. They would probably not appreciate my ogling them, and I was afraid I would be disappointed.  I went inside.

Behind the counter was a pretty young woman with what looked like a shapely figure – beneath her clothing. In fact, there were three young women, fully clothed, working in the office. They didn’t look like they would be punching out any time soon to join the volleyball game. It was my first let down.

They took my $40, put my credit card on file so I could charge things around the resort, and directed me to the parking lot. Standing beside my car, I took my clothes off. It was a little weird taking my clothes off in public, but sort of liberating, in a way.  The gentle summer breeze caressed my naked flesh.  It felt nice. I grabbed my sunblock and headed down the path toward the swimming pool.

The Germans got nudism rolling way back in 1903. Even today Germans have a special love for getting naked, which you know if you’ve ever been to a German public park in the summertime.

All the Naked Germans

Nudism, or naturism, as its frequently called, has roots that go back to ancient times but really got rolling in Germany in the early 20th century. Around 1906 a pair of German philosophers espoused public nudity as a path to greater mental and psychological fitness, and the Germans, never a people to shun a really stimulating philosophy, embraced it.

Such was the popularity of nudism in Germany that during the Nazi era the authorities turned a blind eye, even though the Furher frowned on it and laws had been passed to discourage it. It seems you cannot keep a good naked German down.

In fact, it was Germans who brought nudism to the United States in the 1920’s.  In 1929 a fellow named Kurt Barthel founded the American League for Physical Culture (gotta love the name) and established the first American nudist colony in New Jersey in 1932.

Nude events like the World Naked Bike Ride are cropping up all over the place. But what’s the appeal?

By the mid 1930’s nudist colonies were popping up all up and down the eastern seaboard from New York to South Carolina. Today there are more than 100 naturist resorts in the US, not to mention plenty of nude beaches and other venues where you can strip off your clothes in public, such as nude music festivals, naked bike rides and nude gardening events. But what, after all, is the appeal?

As I approached the pool I could see about a dozen people reclining on chaise lounges naked in the sun, while another dozen or so were in the water playing – wait for it… volleyball. Ah ha! Here was my dream come true, a living, breathing tableau of my earliest sexual fantasy, and I was a part of it! I boldly stepped forward.

As I approached the pool I could see about a dozen people reclining on chaise lounges naked in the sun, while another dozen or so were in the water.

The experience, of course, is not meant to be sexual. In fact, it is oddly anti-sexual. There’s a lot of eye contact at a naturist resort. Sexual hanky-panky of any kind is strictly prohibited. People enjoy social intercourse in the buff, but not intercourse. Arousal is the furthest thing from anyone’s mind.

Soon you are just another person, lying poolside, trying to keep tender places from getting burned.

Before long you find you are not even noticing other people’s bodies. You very quickly become disinterested in the fact that everybody is naked. Soon you are just another person, lying poolside, slathering on gallons of sunblock to keep your tender places from getting burned.

For me, the best parts of the experience had to do with the perfect summer day, 83 degrees, sunny, a light breeze stirring the trees, which, if you are going to walk around naked in public, is made to order.

I enjoyed emerging from the pool with a soft breeze to dry me. I enjoyed relaxing in a non-judgmental atmosphere, respectful of my discretion and maturity. I lifted weights in the weight room. I went for a hike on the hiking trail. I enjoyed a club sandwich at the poolside bar, served to me by a lovely young woman, again fully clothed, who casually chatted with me as I arranged a napkin in my lap to prepare for dining. I enjoyed the fact that nothing stirred beneath that napkin.

The truth is most nudists are over the age of 45 and not what you would deem eye candy.  But on reflection there’s a very good reason for that.

Naturist resorts in the US are only very sparsely attended by young people in their prime. They skew heavily to an older clientele for a very good reason. Older people are less likely to become physically aroused in a way they can’t hide or discourage.

Fantasies are, after all, just that. If they come true in any kind of real way they cease to become fantasies and lose all their magic.  Better to keep them that way.  And put your pants on.

Fantasies are, after all, just that. If they come true in any kind of real way they cease to become fantasies and lose all their potency, becoming just another part of everyday life with all its messiness and frustrations.

Maybe somewhere there’s a nudist colony like the one I saw in the pictures of that discarded magazine all those years ago. But if there is, I hope I never find it. At this point I think I’ll just hang onto the dream. It’s probably better that way.

Driving the Kancamagus Scenic Byway in the White...

Self-Reliance: The Incredible True Story of the Hermit...

Lexington and Concord: The Stirring True Story of...