Walking in the Shoes of Others: Hiking the Bitterroot Mountains 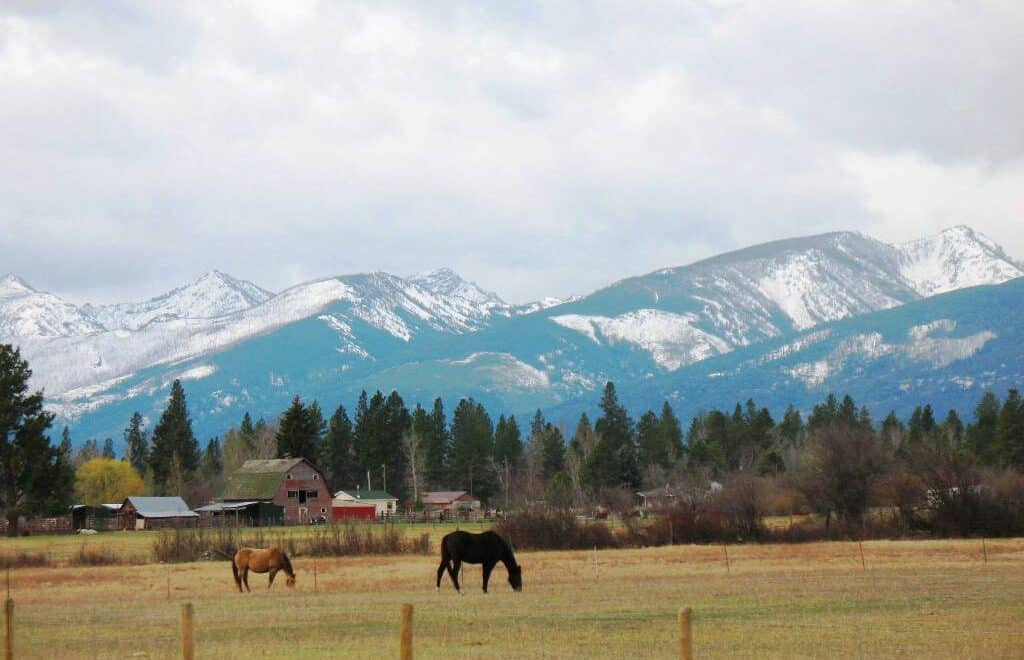 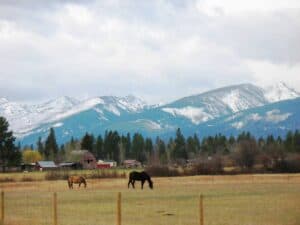 Searching for Bear Creek Overlook, I wandered the pastures and meadows at the foot of the Bitterroot Mountains. (Click any picture for much greater detail and color.)

“Chuff-chuff-chuff,” came the sound. I stopped dead in my tracks and listened. I had been hiking the trail high in the Bitterroot Mountains of western Montana for well over an hour and seen no other person.  There it was again. “Chuff-chuff-chuff,” like an animal panting.
A signboard at the trail head had warned of bears in the area.  It was springtime, female bears were notoriously protective of their cubs.  The sound was coming from just around the corner.  Could I be about to surprise a bear and her cubs?  If she tore me to shreds it might be a long time before anyone found me.
“Chuff-chuff-chuff.”  Wait a minute, I thought.  I know that sound.  I drew myself up and boldly stepped forward.  What I found there reacquainted me with the pervasiveness of institutional blindness in our society, an exasperating condition that afflicts us all. 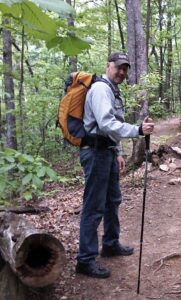 After about an hour, I stopped and checked the printout. Maybe I was hiking too slowly. Or maybe I was a victim of institutional blindness.

A Whole Lot of Misunderstanding

Institutional blindness is the inability of a group immersed in a culture to communicate clearly to those outside the culture.  A perfect example is a conversation with a computer IT Specialist.  For most people, their IT Specialist might as well be speaking Mandarin to them.
The amazing thing, however, is that the IT Specialist has no idea he is not communicating effectively.  He is blithely ignorant of the fact, because in his world everyone understands the jargon he is employing.  To him it’s not jargon. It’s just the way people talk. The specialist and his ilk are suffering from an inability to put themselves in the shoes of others. They are suffering from institutional blindness.
Institutional blindness is everywhere and we are all more or less guilty of it.  Expressing things in the way you are accustomed makes you feel comfortable when in the awkward situation of communicating with strangers.  When combined, on the other side, with the human tendency to avoid being seen as an ignoramus by pretending to understand when no such understanding exists, it all adds up to a whole lot of miscommunication.

Institutional Blindness: Lost in the Bitterroots 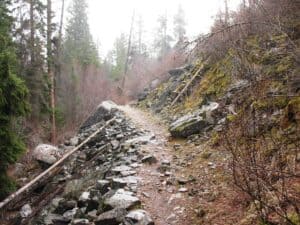 I picked my way across rock spills, over fallen trees, and around muddy sloughs, flanked by the raging creek.

When it comes to institutional blindness, the internet has not helped.  The most popular sites on the web are aggregation sites. These sites invite users to contribute their knowledge and opinions on a particular subject.  The aggregation of those opinions adds up to an overall user rating.  There is no guiding authority.  Anyone can weigh in. The trouble with aggregation sites is that they compound the problem of institutional blindness when too few people contribute.
I used an aggregation website to find a good hiking trail in the Bitterroots, a site called, SummitPost.org.  I looked up Bear Creek Trail,  a portion of the Bitterroots  referred to as “the Montana Alps; their glacier-swept horns, ridges, and high cirques attract many climbers to their windswept granite peaks”. The information included directions to the trail head. The information was compiled from exactly two contributors, presumably hikers who knew the area well. 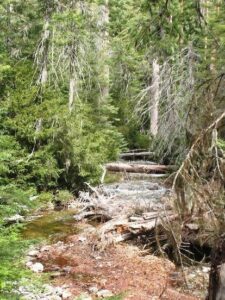 Bear Creek would've been better named Bear Cascade. It was a raging torrent.

Advertisements
The irony of institutional blindness is that the people who know the subject best are the ones most likely to be misleading. They leave out or gloss over important facts because to them, through long experience, such facts seem obvious. This is especially a problem within institutions.
The US Forest Service is tasked with the stewardship of our forests. As part of their role, they maintain visitor’s facilities, including parking lots, rest rooms and signs.  But asking a forest service employee well acquainted with the area to provide directional signs is an invitation to institutional blindness.  They already know how to get where they’re going.  Unless they can put themselves in the shoes of others arriving for the first time, they are unlikely to place the signs wisely.

A Torrent in the Woods 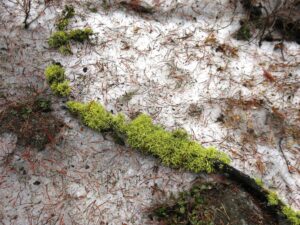 The first green of spring against the last of winter's melting snow.

After rocking and rumbling over a potholed road for the better part of a mile, I came to the trailhead where only one other vehicle was parked, a black pick up truck.  I geared up and started to hike.
Bear Creek is something of a misnomer. In late spring, gorged with snow melt and hurtling through the canyon in a torrent, it would be better named Bear Cascade.  The “creek” surged against its banks, burst over boulders, smashed into rock walls, and backed on itself in frantic eddies.  All along the way, the torrent was fed by rivulets and springs running like faucets, threading their way down the hillsides and across the trail as I hiked.  Then, as if the creek didn’t have enough water contributing to its bounty, it began to rain. 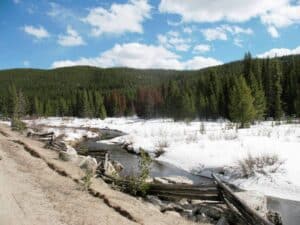 A creek cuts its way through the snow, high up in the mountains of Montana.

I made my way up the trail through the yellow-green profusion of spring, ponderosas, aspens, and endless ranks of supple evergreens.  I picked my way across rock spills, over fallen trees, and around muddly sloughs, the roaring creek flanking me the whole way. After about an hour, I stopped and checked the printout. It said “A hike of no more than an hour brings you to Bear Creek overlook.”  Maybe I was hiking too slowly. I kept on.
Snow began to appear on the trail in patches, shadowed places where the sun didn’t penetrate, the final hold outs from last winter. I kept on.  The snow became more pervasive; now it covered stretches of the trail and I had to watch my step lest I slip and take a tumble into the creek. Before long, the snow completely covered the trail and I punched through the glazed surface, sinking up to my ankles, as I trudged along. Then I heard the sound.  “Chuff-chuff-chuff.”
After briefly considering the possibility of being mauled by a bear, I stepped boldly forward.  I felt certain I knew what it was.

You Can’t Get There From Here

Just ahead was a man bent over a downed tree trunk, sawing away methodically.  As I came up behind him, he turned with a start.
“Sorry,” I said.
He smiled amiably and wiped the perspiration from his brow. We introduced ourselves. His name was Jim Mitchell, owner of Montana Hunting and Fishing Adventures, a wilderness outfitter, and he was in the process of clearing the trail for a bear camp he was planning.
I told him I was headed to Bear Creek Overlook.  He gave me a puzzled look.  “You can’t get there from here,” he told me.  “The overlook trail is on the other side of the canyon.”
I showed him the printout from SummitPost.org. He shrugged. “That isn’t right.” 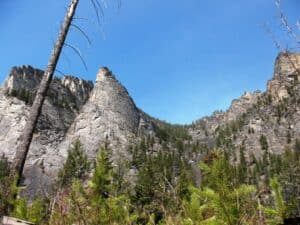 “So where does this trail go?”  I wanted to know, speaking like a nitwit from the Midwest where trails generally have termination points, usually within ten or fifteen miles.  He made a vague gesture meant to communicate that he was uncertain, that he had never seen the end of it, that it went on and on, over the ridge and down the western slope, deep into the state of Idaho.
Feeling game and unwilling to be thwarted by another tiresome run in with institutional blindness, I confirmed that the proper trail, the one I was looking for, was on the other side of the canyon.  Then I left him to his sawing and hiked the hour and a half back to the parking lot, got in the car, and drove back to the crossroads where I followed the sign pointing to Bear Creek Overlook.

The Commonplace and the Captivating

A black billed magpie, common to a native, exotic to an outsider like me.

Advertisements
I drove along and soon fetched up against a T-Intersection, two choices, right or left.  No sign.  Obviously I had to turn left, back toward the mountains.  I did and followed a meandering road which grew narrower and rougher as I progressed, ending at a chain link fence enclosing a mining operation and a big red sign saying No Admittance.
I worked my way back to the T-Intersection and went the other way, a few unpromising looking roads branched off, none offering a sign pointing to Bear Creek Overlook.  After about an hour of driving aimlessly about in the meadows and pastures at the foot of the Bitterroots, I worked my way back to the main highway.
My disappointment, however, was mitigated by the lovely scenery and the wonderful wildlife, including the black billed magpie, so common hereabouts it wouldn’t be worthy of a mention from someone who knew the area well, but a creature I found captivating, with its long tail feathers and cobalt blue flashing. 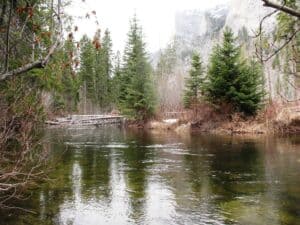 The creek wandered placidly amongst spruces and firs, its waters colored an emerald green.

Fortunately, Jim had told me of a beautiful trail outside the town of Hamilton, one even more stunning than Bear Creek Overlook. All I had to do was follow Main Street straight out of town and I would come to the trailhead in about eight or ten miles.  I did as he instructed.
Like the rest of us, Jim was not immune to a little institutional blindness. His straight shot to the trailhead turned out to be a series of sharp turns, untroubled by signage, but navigable by remaining on the paved road and resisting the urge to turn onto one of the many gravel roads branching off from it.
Jim was right about the beauty of the trail, however.   Blodgett Creek Trail follows a deep canyon between towering granite bluffs hemmed round by ponderosa pines.  The creek at the bottom bears none of the epic ferocity of Bear Creek, but wanders placidly amongst spruces and firs, its waters colored green by an abundance of chlorophyll.


A cowboy mending a fence near Wisdom, Montana. If the Montana Office of Tourism ever needs someone to write a guide, I'm their man.

I wished I could’ve hiked further but it was getting late and I had to turn back.
The State of Montana has been making a big push for tourism recently.  Billboards and print ads promoting Montana have been cropping up everywhere. But nowhere online is there a reliable source mapping out the trail system in the Bitterroots.   The Montana Office of Tourism may want to think about providing this valuable resource. But I have a suggestion for them if they do.
Don’t hire a native of the area. Yes, I know, its seems logical to do so, but natives familiar with the area are vulnerable to institutional blindness.  Better you should hire a complete greenhorn, a newcomer who can see the situation with fresh eyes.
If you are looking for such a greenhorn, I am your man. I would love the opportunity to return to the Bitterroots.  I would love to be able to do so without getting lost quite so much.