Top Posts
Memory Metal: The Enduring Legend of the Roswell...
Unsung Beauty: A Visit to Big Bend National...
Judge Roy Bean and The Law West of...
Not the Right People: Ethnic Cleansing in the...
The View from Up Close on South Padre...
A Truth Best Forgotten? The I-45/Texas Killing Field...
A Night at the Myrtles Plantation, the Most...
A Place of Quiet Contemplation: Driving the Natchez...
Understanding Backwards: Coming to Terms with the Past...
Beside the Singing River: The Extraordinary Musical Legacy...
MontanaThe Mountain States 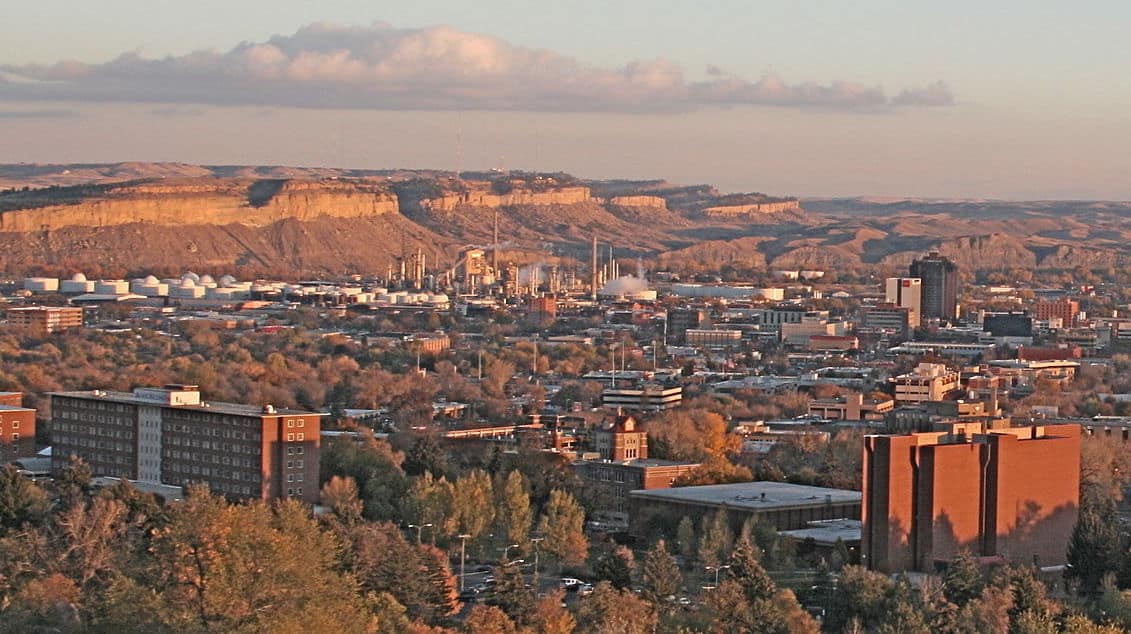 Traveling west from the plains of North Dakota something interesting happens as you approach Billings. The land begins to break up. The rolling prairie gives way to a fantastic landscape of buttes, plateaus and palisades. Looking around, you find yourself in a different environment. The first city you come to is Billings, Montana, the Gateway to the West.

St Louis has long laid claim to that moniker, but there is little truth in it. Drive east to west through St Louis and nothing much changes. But as you approach Billings you can tell you’re arriving in a different place. It’s not just the landscape, but the spirit of the people, a hearty, down-to-earth optimism, a pioneering spirit.

From the beginning, Billings was like that. Drive north out of the city for thirty miles, and you can see the evidence of it. Pompey’s Pillar is a rock formation shaped like the bow of a ship, jutting up out of the prairie 150 feet and overlooking the Yellowstone River. The first pioneer of them all, William Clark of the Lewis and Clark expedition carved his name in it back in 1806. It is the only physical evidence of that historic expedition, which covered 8,000 miles and opened the American West.

The Crow tribe, which is indigenous to the area, saw the first white settlers arriving about 1877 when a sawmill was built on the banks of the Yellowstone River. The town was called Coulson at first, and it was rowdy and lawless. A sheriff was needed. Much to the Crow’s chagrin, the man who was chosen was John “Liver-Eating Johnson”, a larger than life figure who got his name by allegedly killing 300 Crow Indians and eating their livers. Johnson would brook no nonsense. His justice came from the barrel of a gun. The cemetery became a popular gathering place for people who were acquainted with him. They named it Boot Hill because the men buried in it died with their boots on.

Bank Map of Billings 1904. Click any image to enlarge.

Folks arriving in Billings from the east by rail saw the same thing you can see today, an abrupt change in scenery, the gateway to a new frontier and all that it promised. The town went from three buildings beside a train depot to a thriving metropolis of 2,000 in just three months. The growth was so jaw dropping it earned Billings the nickname of the Magic City. And that kind of growth has become a part of Billings character to this day.

The steady upward trend in population has helped fuel a thriving economy. In the early 20th century Billings was producing 60 million pounds of sugar from beets and 40,000 pounds of butter. The lumber mill was the largest in the west. Cattle and wool from the surrounding region were being shipped out of Billings in the tens of thousands. Booming mines poured silver and coal through Billings by the ton.

That good fortune never faltered and has continued into the 21st century. In the early 2000’s the Bakken formation in Montana and North Dakota began producing shale oil. By 2010 it was knocking out 450,000 barrels a day. In 2013, while the rest of the country suffered through the great recession, Billings boasted an unemployment rate of just 5.1%, nearly half the national average.

Up Off the Canvas

In 2014 oil prices plunged, and Billings suffered a blow. Like a welterweight champion who got caught by an unexpected left, Billings was down for the count—or so it seemed. Yet buttressed by a diversified economy built around health care, construction, hospitality and retail, Billings shook off the blow and got back on its feet. Today, in spite of the oil bust of the last decade, it still has an unemployment rate lower than the national average.

Billing is Montana’s most vital city. It’s the retail and service center for a wide region that includes parts of Wyoming and North Dakota. One dollar out of every seven dollars spent in the state of Montana is spent in Billings.

Billings is also the state’s cultural center. The Billings Symphony Orchestra performs regularly at the Alberta Blair Theater, an Art Deco gem that opened in 1931. The Yellowstone Art Museum houses more than 7,000 works of art. And the Western Heritage Center tells the story of life in the Yellowstone River Valley through exhibits, collections and programs.

Billings has all the amenities of a much larger city

With all it has to offer, downtown Billings has experienced something typically seen in much larger cities: gentrification. With the establishment of the Montana Brewing Company in the historic Montana Power Company in 1994, the repurposing of Billings’ historic downtown as a residential and entertainment center got started. Today downtown Billings boasts more than thirty restaurants and drinking establishments, six hotels, including the posh Northern Hotel, and a growing number of residential units with rents averaging $1,100 and sales prices averaging $186,200.

What makes all this interesting from an outsider’s perspective is that Billings remains a middle-class city. Gentrification usually results in a higher cost of living and a slide toward income stratification that separates the haves from the have nots. But not in Billings where the average annual household income is $78,872, the majority of residents work in retail and construction, and the majority of children attend public schools. Yet the city’s attractions are still affordable for them. This is middle-class living with flair, the way America used to be.

As a result, the city has experienced yet another surge in population. In the past twenty-five years the number of residents has climbed 33%. Yet the city remains relatively small by metropolitan standards with a total population of just 109,843. This makes for a comfortable small town feel in a place that has all the amenities of a big city.

The Rimrocks, a sandstone outcrop that form palisades along the east side of the city

Billing’s most striking physical feature are the rimrocks, a sandstone outcrop that forms palisades along the east side of town. Formed by the erosive power of the Yellowstone River over many millennia, the top of the Rimrocks appear to be the natural level of the land, and the land below, on which the city sits, appears to have sunk beneath it. It’s one of those dramatic shifts in landscape common in the American West, but rarely seen east of here. At sunrise or sunset, the Rimrocks are bathed in variations shades of red and gold.

Shopping and Dining in Billings

Billings historic district offers interesting places to shop. Far West Gallery specializes in authentic Native-American beadwork and Western memorabilia. Toucan Gallery showcases Montana’s best contemporary artists alongside jewelry and gifts. This House of Books is a local, community owned bookstore with a focus on Western literature. And Rand’s Custom Hats will make you that Stetson you’ve been a-hankerin’ for.

For dining there are a range of possibilities. At the high end you will find Buffalo Blocks. Housed in the historic Rex Hotel, which once played host to the likes of Calamity Jane and Buffalo Bill, the Blocks specializes in juicy wood-fired Montana steaks. You might also like Ten. Located inside the Northern Hotel, serving up steaks and seafood in a contemporary atmosphere. More moderately priced options can be found at Bin119 Bistro and Wine Bar, or Montana Brewing Company, which is Billing’s original brewpub.

Drinking and Gaming in Billings

If all you want to do is drink, you won’t lack for choices. Billings has more than its fair share of brewpubs, including Angry Hank’s, Carter’s, UberBrew, and Thirsty Street. But if you want a real taste of local flavor, The Rainbow Bar on Montana Avenue is a vintage dive that attracts a variety of eccentrics.

Finally, if your tastes run to Poker or other games of chance, the Crystal Lounge in the heart of downtown offers live Texas Hold ‘Em seven nights a week.

There’s plenty to see and do in Billings. This dynamic city’s unmistakable western character can be seen in everything from its thriving economy to its pioneering spirit. Enter Billings from the east and you’ll be struck by the sense you’ve arrived someplace different. Billings, Montana is truly America’s Gateway to the West.

Olp, Susan. “‘Our Marker of Our Place’: Rimrocks Linked to Billings Identity from the Start,” Billings Gazette, 6 July 2014, website

All other images by Malcolm Logan

Planning a Road Trip this Summer? Here’s How Much Gas Will Cost in the Year Ahead

Why is my Flight Always at the Farthest Gate?

Memory Metal: The Enduring Legend of the Roswell...

I like Billings’ airport up on the butte but one time I arrived in a smog so thick I could taste the oil in the air. Giant refinery. Yellowstone river has eagles all along its path from the park. Tks.