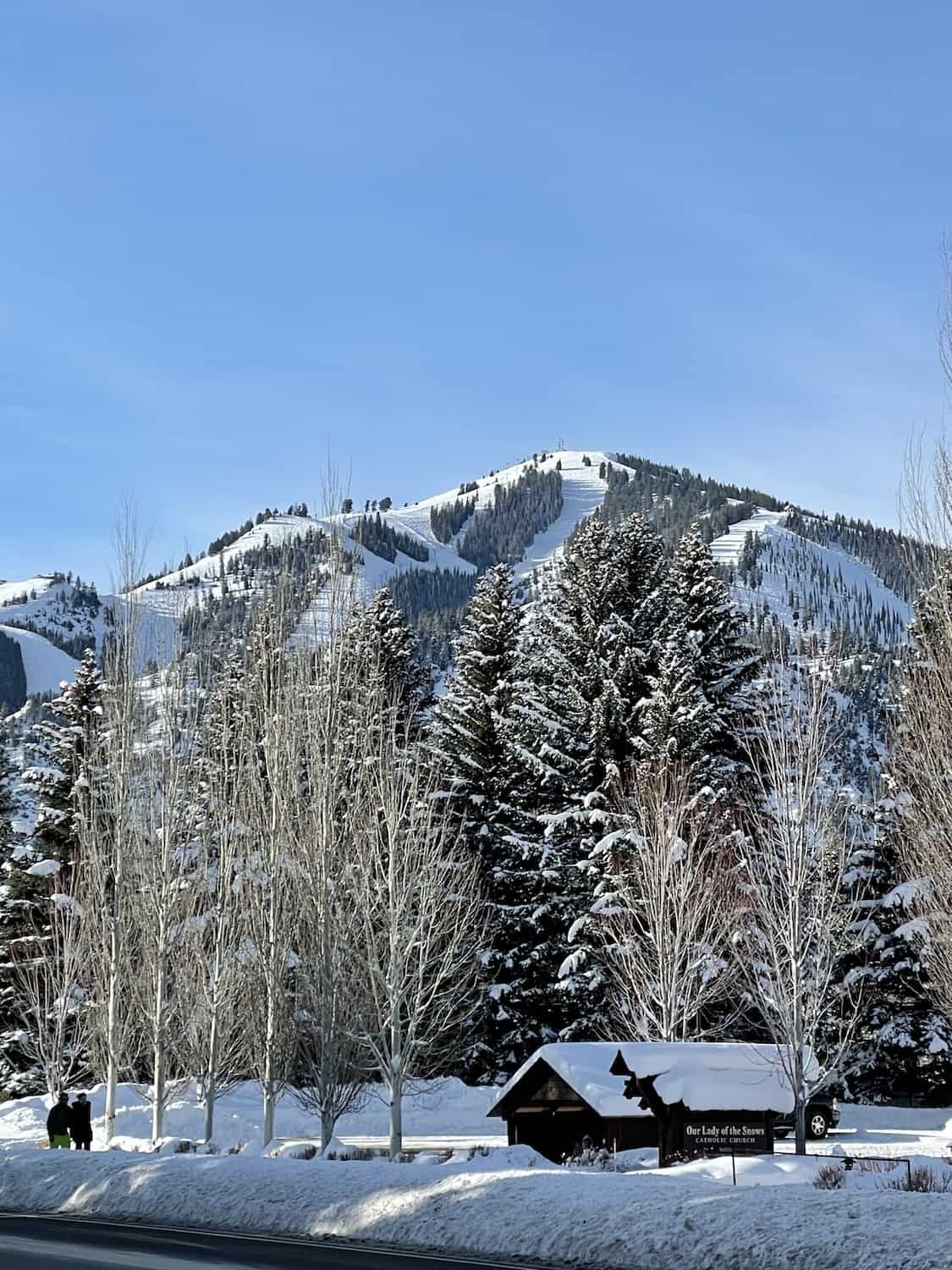 Ample snowfall, abundant sunshine and lack of wind, these were the qualities that led Ketchum to be chosen as the site for America’s first destination ski resort, Sun Valley.

Skiing came to Sun Valley—as it came to all of us—by a roundabout manner. Having existed in Norway for centuries as a form of transportation, it was little regarded as a test of courage and agility until the mid-19th century when those nutty Norwegians embraced the death defying thrills of ski jumping, overlooking downhill skiing as a somewhat more manageable test of nerves and dexterity.

Europe by Way of America

It took Norwegian immigrants to the California gold mines in 1849 to introduce the concept of downhill skiing to the rowdy, devil-may-care gold miners, who lacked a proper ski jump, but still wanted to try killing themselves on skis. They formed schussing competitions in which the participants rocketed down the Sierra Nevada on 12 foot skis at 60 mph. Those that lived to tell about it carried it back to Europe, to Switzerland and Austria, where it was adopted enthusiastically. By the end of the 19th century alpine skiing had become popularized in Europe, by way of America.

Sun Valley skiers in the 1950s. A week of skiing, lodging and lessons cost $75

In the meantime, North America mostly forgot about skiing. It wasn’t until the 1920’s that Canadians reintroduced the concept of downhill skiing in the Laurentian Mountains north of Montreal. They helped popularize the sport by running ski trains, first out of Montreal, and then out of Boston, carrying hundreds of fledgling skiers to the slopes. Oddly enough, it was the trains that first caught the attention of W. Averell Harriman, the millionaire railroad tycoon who would go on to found America’s first destination ski resort, Sun Valley.

A Scheme to Get People on Trains

A skier turns beneath Seattle Ridge in 2021

When the Winter Olympics were held in Lake Placid, NY in 1932, downhill skiing was not yet a part of it (that would not happen until 1936) but it prompted enough of an interest in winter sports that Harriman thought it could be parlayed into profitability for his railroad. Harriman was the owner of the Union Pacific, which had most of its trains out west. Harriman, who had skied in Europe hit upon the idea of creating a destination ski resort in the US that could be serviced by his trains. His main objective was to increase ridership.

Harriman enlisted an Austrian nobleman and winter sports enthusiast to seek out the ideal location. The nobleman suggested the mountains around Ketchum, Idaho.

Ketchum as seen from Bald Mountain

Harriman went to Ketchum and looked it over. Taking note of Ketchum’s ample snowfall, abundant sunshine and lack of wind, he gave it the thumbs up. The resort was built in just seven months and opened on December 21st, 1936. Sun Valley was not America’s first ski area, but it was America’s first destination ski resort, an innovation that was to have far reaching implications in the decades ahead.

Riding up Mountains in Chairs

Three skiers under a chairlift at Sun Valley in the 1950’s. Sun Valley was the first ski resort in the world to offer chairlifts.

Within a year of opening, Sun Valley had introduced the world’s first chairlifts, sending ripples across the Atlantic to Europe, where they had just graduated from tromping up the slopes on foot to using rope tows and J-bars. They thought they were pretty slick. Harriman was slicker.

To get people interested in Sun Valley, Harriman invited celebrities to ski there. The resulting press coverage was an effective form of promotion. Movie stars Clark Gable, Gary Cooper and Lucille Ball came, as did the novelist Ernest Hemingway, who was so impressed he eventually moved there—and died there.

View from the top of Bald Mountain today

Before long, Union Pacific train lines from Chicago, Kansas City and Los Angeles were bringing curious passengers to Sun Valley to try skiing on a grand scale. The experience super-charged the sport. Others got in on the act. In 1940 Colorado’s first major ski resort Winter Park opened. In 1947 Aspen was born. And in 1949 Squaw Valley brought skiing back to the Sierra Nevada in a big way.

Skiing on the Cheap

At Sun Valley Harriman introduced competitive downhill ski racing to North America in 1937 with the Harriman Cup, a forerunner of the World Cup. Downhill racing and slalom became Olympic sports. Skiing began to gain a higher profile in the national consciousness. And for a while it remained cheap. In 1950 an entire week at Sun Valley, including lift tickets, lodging and lessons was $75. But that was soon to change.

Skiers at the Roundhouse lodge about 1955. Skiing was always a sport for young people.

Inexpensive skiing was a consequence of its discomfort and difficulty; few people wanted to pay a lot of money to flounder around in the cold and risk serious injury. But with the advent of improved equipment, trail grooming and more comfortable clothing, the tradeoffs became worthwhile, and skiing grew in popularity.

As the demand increased so did the price. Between 1951 and 1965 the price of a lift ticket, nationally, increased 66%—three times the rate of inflation. Even so, participation in skiing grew at 15% annually, doubling every five or six years, driven by the demographic surge of the baby boomers. Skiing was always a sport for young people. By 1965 there were just more of them. The growth spurred expansion.

The Era of the Mega-Resorts

Instead of adding dozens of additional resorts each year, existing resorts expanded their skiable terrain. In 1971 Breckenridge added 12 trails and two lifts to the existing resort. In 1975 Winter Park added 350 acres and expanded the resort by 80%. As usual, Sun Valley was ahead of the trend, having added 29 new trails and seven chairlifts between 1965 and 1967.

The growth of big resorts had the unintended consequence of driving smaller resorts out of business. This, in turn, had the effect of encouraging still greater expansion at big resorts, leading to the era of the mega-resort, places like Park City, Big Sky or Whistler-Blackcomb that today offer more than 300 trails over more than ten-square-miles.

For the first time in its history, Sun Valley was playing catch up. After earlier expansions in the last decades of the 20th-century, Sun Valley had fallen behind the big boys in terms of size. But that’s about to change. Sun Valley plans to add 380 acres of new skiable terrain in 2021 and 2022.

Bluebird Days Breathtaking in Their Beauty

At the base of Bald Mountain sits the town of Ketchum, Idaho, a former mining town that became the largest sheep-shipping center in the west in the 1920’s. Along with the mountain, it was the railhead at Ketchum that drew the attention of Averell Harriman to the town as a potential ski destination in the 1930’s. The town has a charming old west vibe and is loaded with plenty of amenities: shops, restaurants and lodgings. As an aprés ski destination it has few rivals.

A trip to Sun Valley is an experienced not to be missed. While other resorts may be bigger and brawnier, few can match Sun Valley for its history, charm and beauty. Skiing came to Sun Valley by a runabout manner, across decades and centuries, but it has arrived in fine form, doing justice to its legacy as the first destination ski resort in the US.

How Ski Resorts are Handling the Pandemic

The Hub-and-Spoke Model of Air Travel, and Which US Cities are Hubs

Message in a Black Box: Alien Encounters at...