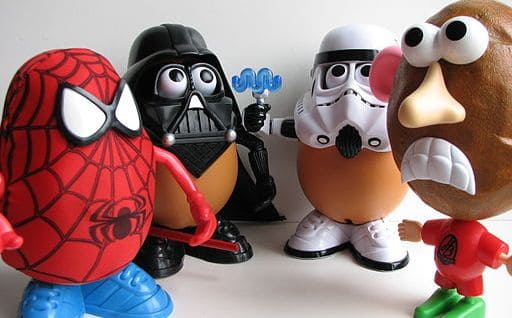 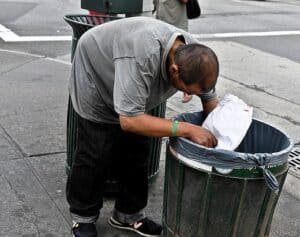 Boise, Idaho is home to all sorts of people, including those who have descended from a lofty perch.

Wandering the streets of Boise, I came across a homeless guy picking through the trash. I was just finishing my lunch, a McDonalds number one value meal, which, if you don’t already know, is a Big Mac, soft drink and fries. Foolishly, I had agreed to super size it, which meant that now I had far more fries than I had could reasonably consume, so I offered them to the homeless guy.
He fell back as if I’d punched him in the chest. “Never!” he cried. “Take them away! Take them out of my sight!”
Perplexed, I tossed them in the trash and began to walk away.
“Wait!” he cried and caught up to me. “Forgive me,” he said. “I didn’t mean to startle you . That was very kind of you to offer me your lunch.  It’s just that – well, I have a visceral reaction to fries.” 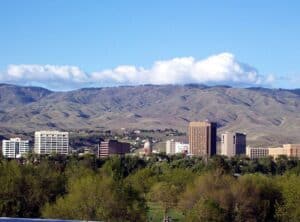 Scenic Boise. I had no idea that such a lovely city could harbor such a miserable soul.

Normally, I would walk away at this point and have no more to do with someone who was clearly unhinged, but there was something rational and sincere in his manner and he seemed peculiarly articulate for a homeless man, so I asked him why – why did he have a visceral reaction to fries?
“Oh, you wouldn’t believe it,” he said.  “Sometimes I can’t believe it myself.  So much money, such a brilliant opportunity. Gone, all gone.” He shook his head dismally and sat down heavily on the curb. He gestured for me to sit down beside him.
I did, surrendering to my curiosity.  We sat there, watching the traffic of downtown Boise go by, as he unfolded his incredible story to me.
Here’s what he told me… 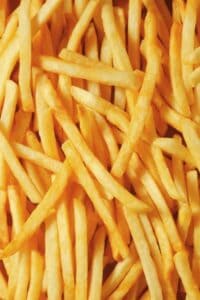 Everybody loves french fries. A franchise centered around fries was bound to succeed.

I wasn’t always like this. Once upon a time, I was well-to-do. I had dreams. What’s more, I had the resources and education to parlay them into something bigger.
America, the land of opportunity. That’s what I had in mind.
My father was an entrepreneur, my grandfather was an entrepreneur. Like them, I planned to be rich and successful.
I had lofty goals, I was willing to work hard, and I had one further advantage, given my prospective enterprise. I lived in Boise, Idaho.
French Fry World was going to be the name of my chain.  The stores were going to offer nothing but french fries – crinkle cut, cottage, curly, English chips, etc. –  with a choice of different sauces: catsup, mayonnaise, vinegar. Any combination for $6.99.
It promised to be a huge success. The V.C.’s loved it.  They were falling all over themselves trying to give me money.  We projected to open 500 stores domestically in the first year, another 500 the next.  The upside was limitless. But I had a problem. 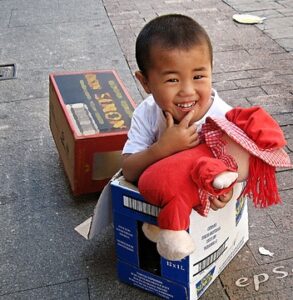 Unfortunately, this little fellow and his love for toys triggered a string of events that led to disaster.

I needed potatoes. Lots of potatoes. And I needed to know what those potatoes were going to cost, not just now but six months from now, when we started rolling out the franchises.
So I put out a future’s contract.
A futures contract is an agreement between two parties to exchange an asset for a price agreed today with delivery occurring at a future date.  In my case, I agreed to buy a 100,000 kilograms of potatoes at $800,000 for delivery in six months.  If potato prices spiked between now and then, I was insulated. I would still get my potatoes for $800,000. But if prices fell, I would have to take delivery of potatoes at a higher price than the market called for. I would be overpaying for my potatoes. That was a risk I was willing to take.
The other party who agreed to make this deal was speculating that the price of potatoes would fall. If prices for potatoes actually did fall to $700,000, I would still pay him $800,000 and he would pocket the $100,000 difference.
But that’s not what happened. 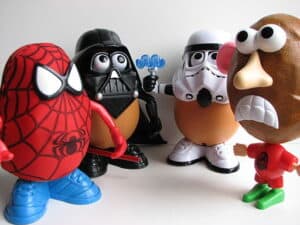 Chinese consumerism was on the rise, a net good for the United States, as I had been taught to believe – I certainly looked forward to the day when the first French Fry World opened in Beijing!  But what I didn’t comprehend until too late was that only one class of Americans was destined to benefit from China’s amazing growth.
What happened was this.
Chinese children, who had never experienced classic Western toys like Etch-a-Sketch and Slinky, discovered Mr. Potato Head. The demand for potatoes into which children could stick googly-eyes, red plastic lips and a jaunty top hat sky rocketed. The price of potatoes soared.
At first I was laughing. This was great! Potatoes were up to $1 million dollars and I had contracted mine for a mere $800,000. But then reality set in. 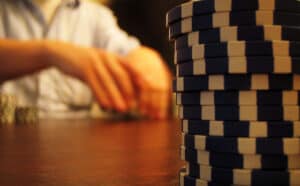 What he didn’t factor in were the speculators, mere gamblers, get-rich-quick artists who had gamed the system to their advantage.

The demand for potatoes continued to go up as the Mr. Potato head craze spread to Southeast Asia and India. The next time I went to make a contract, the price would be much higher.  But I could still stay ahead of the curve if I acted fast.  Or so I thought.
What I didn’t factor in were the speculators, not legitimate businesspeople like myself who had a reason to hedge potatoes, but mere gamblers, get-rich-quick artists who wanted to see the price rise in order to make a quick buck.
What I didn’t see coming was the number and intensity of these people. I suppose it might have been fair – even desirable – if these people had acted within the constraints of a free market, but they did not.  They had gamed the system so they could buy and sell potatoes without ever having to take delivery, which meant they never had to incur the costs or logistical challenges of legitimate speculators and could afford to simply run up the price. 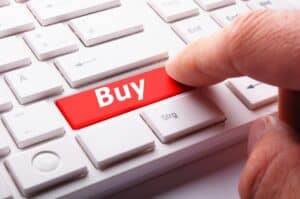 The speculators could buy more potato futures than there were physical potatoes in the marketplace!

What’s more – and here’s what really shocked me – these speculators could buy more potato futures than there were physical potatoes in the marketplace!  Naturally, if the number of people speculating that the price would rise was greater than the commodity available to buy, this would be perceived as a seriously underpriced commodity, which would lead to another round of frenzied speculating, driving up the price even further.
The cost of my potatoes was going through the roof!  My $6.99 consumer price had already inflated to $7.99. If it went much further my whole business plan would be in jeopardy. Then disaster struck.
Advertisements

The Western-friendly government of North Scooziland was overthrown by a belligerent fundamentalist regime. North Scooziland was one of the world’s top producers of spuds. The new regime threatened to develop nuclear weapons and the West retaliated with economic sanctions.
To make matters worse, the threat of war with North Scooziland drove prices even higher.
The threat of war with North Scooziland was driving prices even higher. My whole enterprise was on the verge of collapse. So I wrote to my congressman, who had a brilliant solution. We needed to stop buying spuds from foreign sources and expand our domestic supply.
The problem was the damned liberals. They were preventing us from converting large tracts of public land into working potato farms. More than 52% of land in Idaho is public land, most of which is used for wildlife conservation and recreation. Large swaths of it could be converted into corporate potato farms if the liberals would just shut up.
So I sent money to my congressman and enlisted in causes designed to overcome liberal objections to corporate farming on public lands. It worked. The amount of acreage devoted to corporate farming grew by 20%. Unfortunately, the price of potatoes just continued to rise – and for good reason. 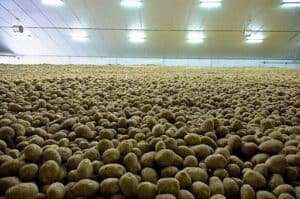 There were plenty of potatoes, warehouses full of them, but then the corporate potato farmers deliberately strangled the supply.

Among the speculators making a killing on the rising cost of potatoes were the corporate potato farmers themselves!  By getting access to public lands they had won the ability to grow potatoes whenever and wherever they wanted, regardless of the environmental impact.  But that didn’t mean they had to pick the potatoes.
With the cost of potatoes going ever higher, Americans had cut back on their potato consumption. So the corporate farmers cut back on their harvest, claiming that domestic consumption was down. Consequently, the potatoes were left to rot in the field!

Global demand was still high – the Mr. Potato head craze had not let up – but these speculators simply suppressed the supply, which kept prices high, allowing them to generate huge profits when they went to sell. 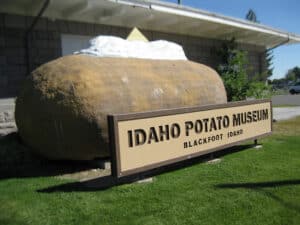 Potatoes have always been big in America.

I was sick. I went to my congressman and voiced my objections. He told me not to worry, that this was good for America and good for enterprise. He told me we were rewarding the job producers.
I told him I was a job producer, that my chain of restaurants would’ve employed 30,000 people within five years, if I could only have gotten my potatoes at a reasonable price, but he only laughed. “What’s good for Wall Street is good for America,” he told me.  “Everybody knows that.”
My enterprise collapsed. I lost everything. The Wall Street speculators made out. They insulated themselves on the backend by selling short and raking in huge profits in arbitrage. If you don’t know what arbitrage is, you should look it up. 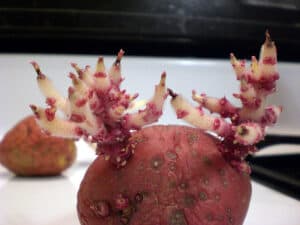 When potatoes rot they grow grotesque tumors as they slowly collapse in on themselves.

The problem with speculators is that they don’t produce anything worthwhile, except for profiting themselves. When speculators start hindering job producers, you either have to change the rules or tax the hell out of them. If you don’t, you are on the road to something ugly.
Take a look at a potato field.  When potatoes rot they grow grotesque tumors as they slowly collapse in on themselves.
When I look at a potato now, I can’t help but think of the United States.
Can nothing stop this blight?
Advertisements

The Ravings of a Lunatic

He got up slowly from the curb and thanked me for taking the time to listen to him. He said he would tell it to a therapist, if he could only afford one. 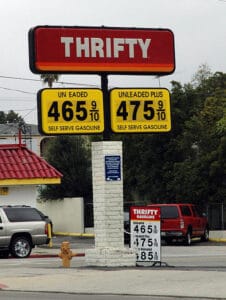 The story had to be the ravings of a lunatic, but for some reason I couldn’t get it out of my mind.

I offered to run back down to the McDonalds and get him something to eat, something other than french fries, but he wouldn’t hear of it. It was enough, he said, to have taken up my time. He wished me well and left me standing there, reflecting on what he’d told me.
It had to be false, the ravings of a lunatic. The government would never allow speculators to buy a commodity and never take delivery of it. That was ludicrous. And the notion that speculators could buy more futures contracts than actual physical commodities in the marketplace, well, that was just absurd. And the idea that producers of a commodity would suppress the supply, choking it off at the point of processing, in order to drive up the price. I couldn’t imagine where he got such crazy notions.
Still, he seemed plausible somehow.
As I drove out of Boise, I stopped for gas.
For some reason, I couldn’t get it out of my head.