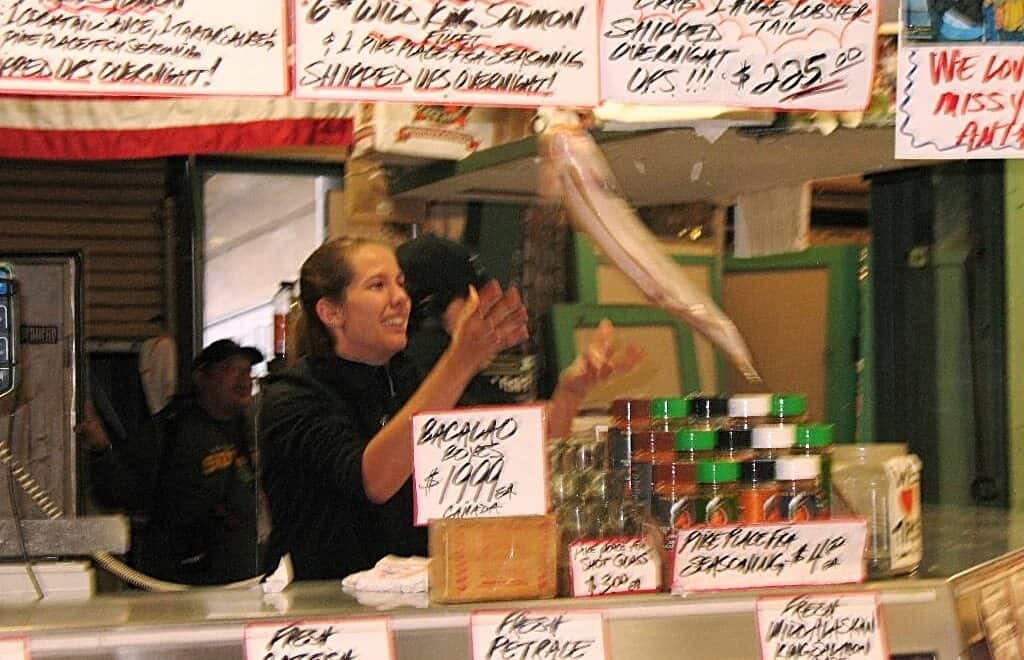 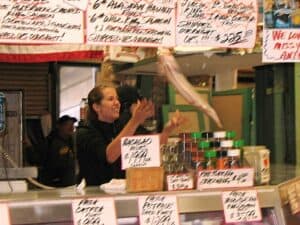 The fish throwers at Pike Place Market have a call and response routine that concludes with a halibut being heaved over the counter.

Let’s be honest.  I like to eat and drink.  And as I travel around the country looking for interesting places to dine and imbibe, I’m often shocked at how deficient some cities are. Take Little Rock, for example, a pub and grub desert. Or Indianapolis where they just discovered tapas last week.
Some cities tout the wide variety of their dining options, but where there may be breadth there is no depth.  Towns like Charlotte, Orlando and St. Louis have plenty of restaurants, but they’re mostly national chains, the usual collection of Cheesecake Factories, TGI Fridays and PF Changs. Yawn.
That’s why when I hit a town like Seattle it’s time to dig in. The city of Seattle has more than 1,500 dining establishments, many of them independent operations. In addition, it has more than 2,000 bars. Yet that’s not where the real story lies. 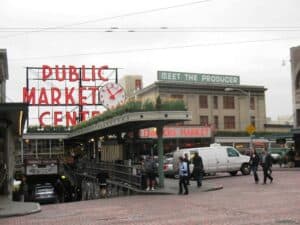 Pike Place Market is the oldest continuously operating farmer's market in the US, and the food is out of this world. (Click any picture to enlarge).

In Seattle the food and drink are remarkably fresh. That’s because Seattle is home to an astonishing number of small craft breweries and farm-to-table eateries.  When you dine in Seattle, you can throw the cookie cutter away, because something garden-fresh and flavorful is about to hit your plate.

Seattle’s flare with fresh food is best witnessed at Pike Place Market. Viewed as a mere tourist attraction by some, Pike Place Market is no Fisherman’s Wharf. It’s an actual, functioning farmers market, the oldest continuously operating farmer’s market in the U.S.  Covering 9 acres with 600 venues, the market dishes up everything from raspberry crepes to chicken vindaloo to Ethiopian coffee.  Frankly, it can be a challenge to take it all in, unless you have some help. 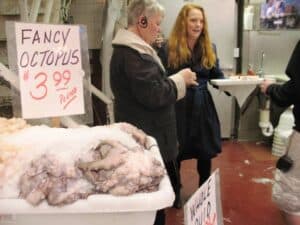 Seattle Bites Food Tour is number 1 on Trip Advisor for a reason, it delivers what it promises, a 3 hour behind the scenes tour of Pike Place Market conducted by bright, energetic guides who know the history and culture of the market, and most importantly know where to take you for some lip-smacking samples of some downright yummy food.
Our tour guide, Kristin, was a real firecracker, one of those people who go a mile minute, tossing out wisecracks like she’s shedding sparks, smart, sassy and fearless. Kristin knew everybody at Pike Place Market, falling into air kisses left and right, waving  hello as she bowled along, the seven of us in tow, leading us through the warren of alleyways, corridors and arcades that make up the market. 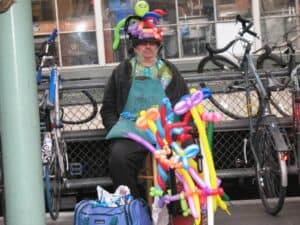 Pike Place Market is known as much for its street performers and assorted oddballs as it is for its food.

Pike Place Market was founded in 1907 on Seattle’s waterfront overlooking Elliott Bay. Originally it was conceived as a way to break the stranglehold of price-fixing food cartels and bring farm goods directly to consumers.  It was a smash hit right from the start and expanded rapidly. But during World War II, the Japanese farmers, who made up a healthy portion of vendors in the market, were rounded up and interred, their property confiscated.
After the war, the Japanese farmers refused to return and the market went into decline. Through the 1950’s and 60’s, the market limped along and was slated for demolition in 1971 when a grass-roots movement succeeded in saving it. From then on, the market was viewed as an important part of the heritage of Seattle and began to revive. On August 17, 2007 Pike Place Market celebrated its 100th anniversary. 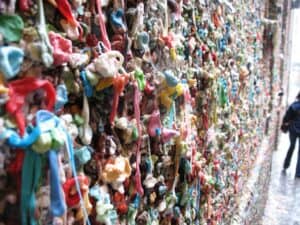 The wall of chewing gum is the wild outcome of many, many passersby' decisions to sling their gum against the wall.

Nancy Nipples and the Wall of Goo

Today the market is known as much for its buskers, street performers and assorted oddballs as it is for its fresh food. As you stroll along, sampling the wares, you are entertained by jugglers, musicians, acrobats and balloon men. In an alley below street level you are confronted by a brick wall covered in chewing gum, the flamboyant remnant of a single person’s decision to sling his gum against the wall. Others followed suit and soon the wall was covered with a colorful mural of masticated goo, earning the distinction of being the most unsanitary tourist site in America.
Above ground at the Sanitary Market, so named because it is the part of the market designated for meatless products, one can buy cheeses and dairy products from Nancy Nipples the Milk Maid (real name). 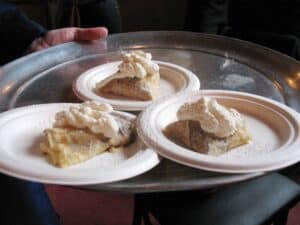 Around the corner, one can savor the award winning clam chowder at Pike Place Chowder, a smooth, delicious concoction so stunningly good it requires someone with the chutzpah of Kristin to tear you away from it.
Our tour began across the street from the market at the Seattle Museum of Art where we noshed on a salmon and cilantro flatbread at Taste of SAM. Then Kristin gave us a brief primer on the history of the market before we waded in, heading first to Crepe de France for a banana crepe, and then around the corner to the I Love New York Deli for a pastrami on rye.
After our heavenly encounter with Pike Place Chowder, we stopped by Saffron Spice for a tasty Chicken Tikka Masala, and then we headed over to the Pure Food Fish Market where we scarfed down the fresh salmon. 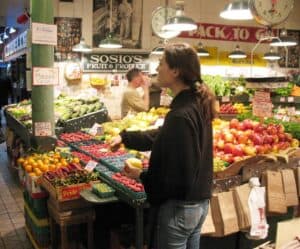 Free samples of fresh fruit and vegetables are handed out at several stands in Park Place Market.

At Corner Produce we snacked on slices of mango, kumquats and champagne grapes, and then we made our way to Uli’s Sausages where we tucked into a delicious Nuremburg sausage.
The tour wound up at the Lost River Winery where we sipped samplings of pinot noir, cabernet and merlot.
If you are in Seattle, carve out some time for the Seattle Bites tour of Pike Place Market.  The guides are a hoot, the venue is fascinating, and the food is delicious.  But food is only half the story when it comes to dining in Seattle.  If you are a beer drinker like I am, Seattle is Mecca.

Tippling with the Foreordained 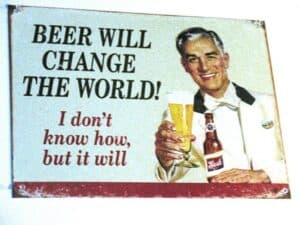 Road Dogs Brewery Tours shares the opinion that Beer Will Change the World and seeks to convince you too.

Advertisements
Here’s an interesting fact. Everybody knows that Germany is the top hop producing region in the world. But what’s number two?
Believe it or not, Washington state.  In fact, 80% of the hops used in American breweries come from Washington, which explains why the state is home to more than 150 small craft breweries. The City of Seattle alone boasts 40 of them. All of which makes Seattle the perfect place to go on a Brewery Tour.
Road Dogs Brewery Tour is a craft brew pub crawl run by Dustin Boast, a native of the Pacific Northwest by way of Chicago. To our mutual shock, Dustin once lived on the same street as I in Wrigleyville near the lakefront on the north side of Chi Town. Even more mind-boggling, Dustin and I lived in the same building  – at the same time!  Our encounter had something of the foreordained about it. 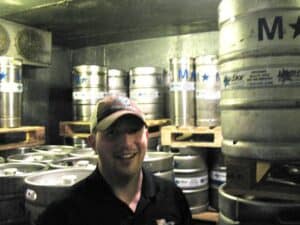 Dustin of Road Dogs takes you into the backrooms among the stacks and vats to familiarize you with the brewing process.

We started out at the red brick Pyramid Brewery across the street from Safeco Field where I sipped a sampler of six tasty drafts including the Pyramid Helles Smokey, a lager with a distinct smokey flavor imparted by two smoked malts.
Our next stop was Big Al’s Brewery, a non-descript aluminum warehouse in Seattle’s southern industrial belt. Here I tucked into Big Al’s Chocolatey Smoked Porter made of roasted barley, peated malt and, yes, chocolate. While I imbibed, Dustin gave me a primer on the different types of breweries.

At the top of the scale you’ve got the Mass Market Brewers: Budweiser, Miller, Coors, producing generally flavorless beer for people who don’t really like beer or who resist experimentation on principal. 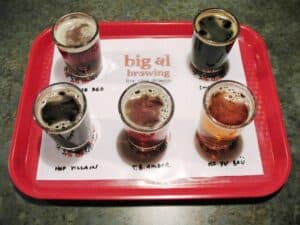 The sampler at Big Al's Brewery. The chocolatey smoked porter was especially good.

Next you have the upstarts: Sam Adams, Sierra Nevada, Red Hook, Shiner, etc. these are the guys who introduced the concept of beer with flavor back in the 80’s and have flourished since then. They fall under the label of Craft Brewers and produce over 6,000 barrels a year. The next level down are the Micro Brewers, producing less than 6,000 barrels a year, outfits like Dogfish Head, New Belgium, Brooklyn, Full Sail and Big Al’s. Below them are the Nano Brewers who produce less than a 1,000 barrels, and then you have the home brewers.
Our final stop was Hale’s Brewery, the oldest craft brewery in the state of Washington. Here I sampled Hale’s Cream Ale, a silky smooth Dublin style pale ale with a creamy finish. 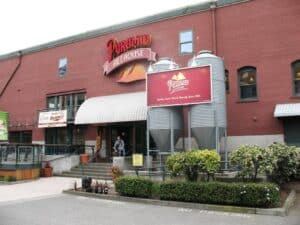 Advertisements
At each of these places I downed six different 6 ounce samplers.  Although I told Dustin that it was rare that I got drunk on beer any more, some of these little devils packed as much as 11% alcohol, so that by the time we got back to Safeco Field I was feeling a bit tipsy.
Fortunately, I was within walking distance of the hotel, so I strolled back through Pioneer Square and stretched out in bed, fingers knitted behind my head, smiling placidly up at the ceiling.  My eating and drinking tours of Seattle were a complete success.
Seattle is a great town for food and drink. If you are going there, check out Seattle Bites and Road Dog Brewery Tour.  They will show you the depth and breadth of the foodie scene in Seattle, fill your belly and leave a smile on your face.

See More Photos from my visit to  Washington state at Pinterest