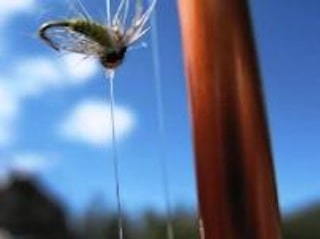 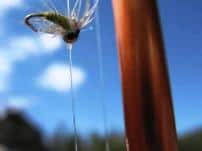 The object of the exercise was to disguise a treacherous hook as an emerging May Fly for the purpose of fooling an unsuspecting trout into becoming dinner.

Fly Fishing has taught me to respect fish.  In two days of fishing in the mountains outside Denver, Colorado I managed to hook a surprising number of rainbow trout.  Yet during that same time I managed to hook myself no less than nine times and each time it was a delicate, time consuming operation to remove the hook from my sleeves, waders and flesh.  On the other hand, the fish seemed to have no trouble at all slipping off the hook.  Fish are more clever than you think.

How to Trick the Stupid

Our guide told us as much.  John Perizzolo, a quick-to-smile, goateed expert angler, pointed out that most trout like to lie face up against the current and wait for larval bugs and other insects to come sweeping downstream and then dart out and swallow them.  All we had to do was mimic those bugs and we could catch fish. 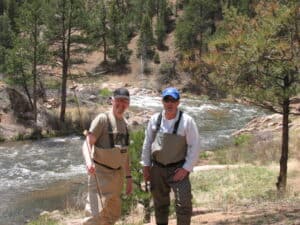 Here I am with my old buddy Tim Lincoln (on the right). The trout were insulted by such a pair of rubes presuming to trick them. (Click any picture to enlarge.)

It seems, however, that the trout in these heavily-fished waters near Deckers, Colorado had grown a bit jaded.  They had seen more than their fair share of expertly tied flies and only yawned and turned away when a pair of greenhorns like Tim Lincoln and I came galumphing along.
For that reason John Perizzolo tied the flies for us, his thick fingers moving nimbly around the monofilament leader, primping and snipping the colored fibers to disguise a treacherous hook as an emerging May Fly for the purpose of fooling an unsuspecting trout.  Thus far has human mental development taken us.
Mind you, this dressing of the fly occurred only after John’s expert eye had carefully selected the right fly from a box that contained rank upon rank of flies, each one mimicking a different insect at a different stage of development.  It seems trout can be quite discerning when it comes to dining.


Experts like John Perizzolo not only know how and what to tie, they are locals who know the country.

Advertisements
John knew the kind of four star meal a fish would favor at this time of day, at this time of year and in these precise weather conditions, and he tied the flies accordingly.  Then he applied a piece of putty to the line to add weight and knotted a piece of macramé yarn to act as a bobber – except that fly fishermen don’t call them bobbers.

The Formula One of the Fishing World

Fly fishing is considered a more cerebral and spiritual form of fishing than mere lake fishing and the terminology is upgraded to reflect that.  My bobber was now a strike indicator.  My lures were flies.  And standing around fishing was now called “presentation.” 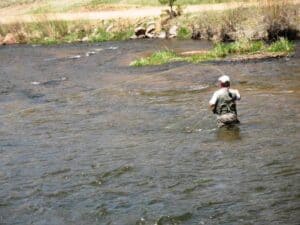 Fly fishing involves laying the fly on top of the water and coaxing the fish to lunge at it by gently tugging the line.

Presentation is what you show the fish, the way your fly drifts through the water, mimicking the larval bug.  As I say, the fish are not dumb.  If they see anything that looks – well, fishy; they will not be tricked.  If the fly is moving too fast, John will increase the drag on the line by moving the weight on the lead.  If the fly is too deep or too high in the flow, he’ll adjust the length of the lead or change the weight of the line.  If the ersatz May fly is not producing strikes, he’ll change it over to a Sparkle Pupa or any of a thousand different flies that can produce a different result.
All of these tiny little adjustments and recalibrations are done on the fly (so to speak) while you’re standing thigh deep in a rushing mountain stream.  It is this nimble tactical expertise, and the rich array of options, that makes the experienced fly fisherman the Formula One driver of the fishing world. 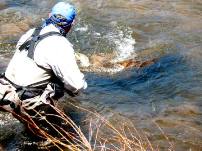 John Perizzolo, our guide, leans over to net one of the writhing trout we hooked.

Tim Lincoln Gets His Revenge

Yet even with an expert tying your flies it’s ultimately up to you to set the hook, and with the peculiar good fortune bestowed upon the ignorant, I managed to catch five 14 inch rainbow trout on a particularly active stretch of water in about 15 minutes.
My buddy, Lincoln, who had fly fished before, was stymied.  He kept casting baleful looks in my direction, disgruntled by my success, until John took pity on him and suggested we move to a new location.  Much to Lincoln’s chagrin this involved hiking up and over a steep ridge and into a neighboring canyon where he had to sit down and catch his breath before he could begin pestering the trout again. 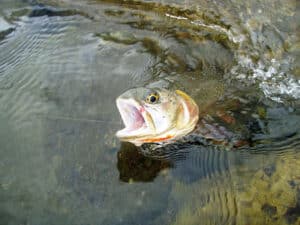 Lincoln's quarry emerges, mad as hell that a fisherman the caliber of Lincoln bagged it.

Lincoln is one of my oldest friends and I love him dearly, so my heart goes out to him when he is feeling humiliated – but my empathy only emerges after I have had an opportunity to relish the humor of his plight.  So after I got off a few jabs, and enjoyed his glowering reaction, I accompanied him to the new spot, encouraging him to buck up and not take it so hard.
In this new location my luck vanished and I stood there watching that mocking piece of yarn drift by again and again while Lincoln earned some much needed pay back by hooking the biggest fish of the day, a sparkling 18 incher that seemed to roll its eyes in weary exasperation when it realized what kind of rube had bagged it.
The rest of the day saw a half dozen fruitless strikes, a good deal of fishy indifference and a lot of getting hung up on flotsam, rocks and bushes.  At one point I gamely fought a piece of tree limb until John helped me reel it in and offered to introduce me to a taxidermist who could mount it to good effect. 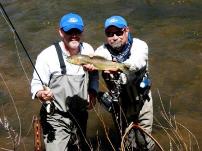 Tips for Fly Fishing in Colorado

All in all, Lincoln and I had a grand time angling in the waters of the South Platte River.  The particular type of fly fishing we were engaged in is what they call Colorado high sticking or nymph fishing, which involves dropping the fly below the water line and letting it drift with the current.  This is different than the better known dry fly fishing, which involves laying the fly on top of the water and coaxing the fish to lunge at it.  Nymph fishing is a little easier and more forgiving to the inexperienced angler, and Lincoln and I needed all the help we could get.
The fly fishing season runs from Mid-May to Mid-October in the Colorado high country. After that you risk getting a load of buckshot in your rear, because hunting season kicks in.  Early season fishing is blessedly free of mosquitoes and other flying insects, but prepare yourself for the sun.  The thin air and reflecting water amplifies the burn risk. 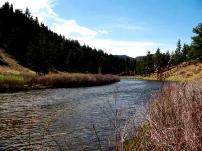 The South Platte River near Deckers, Colorado, scene of our fly fishing adventure.

Even if you’re a competent fisherman, hire a guide.  John came to us through the good graces of Blue Quill Angler, a full service outfitter based in Evergreen, Colorado.    Experts like John Perizzolo not only know how and what to tie, they are locals who know the country and have been fishing its rivers for decades.  Such expertise produces results, even when the so called “fishermen” can’t tie a fly a to save their lives and are liable to be outwitted by a primordial creature like a fish.
But then again, fish are more clever than you think. 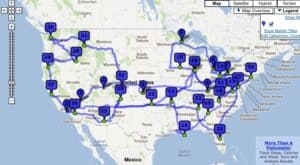