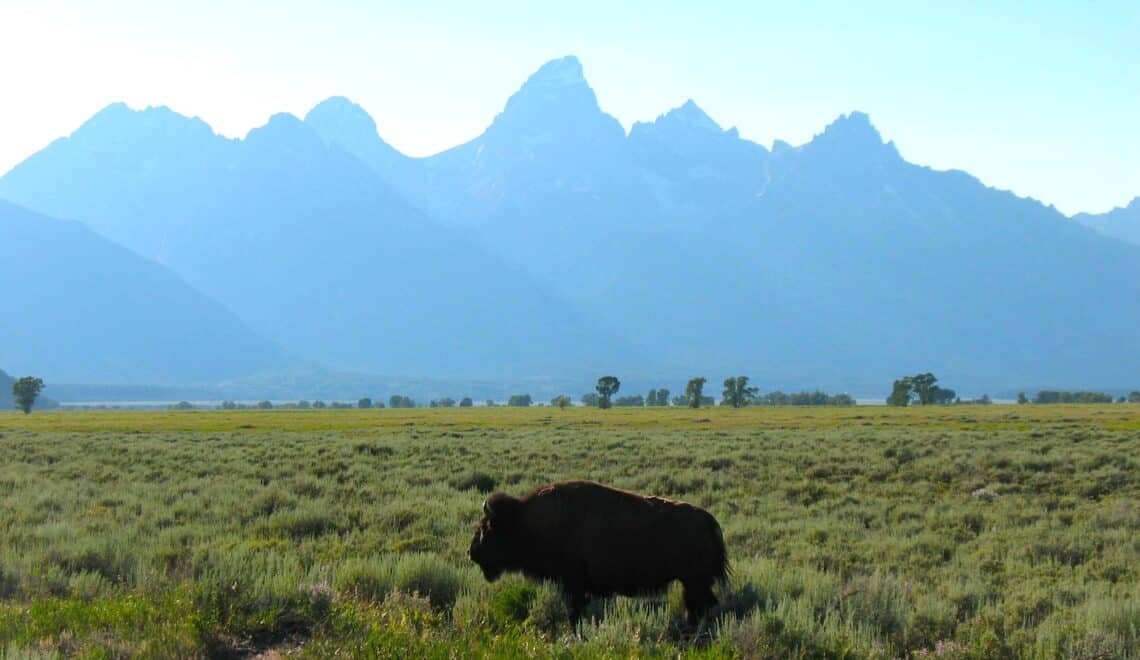 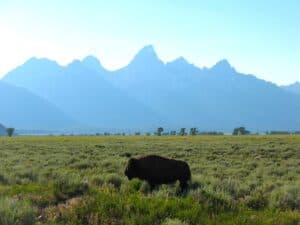 My poor wife. She had never been to Yellowstone, never seen its awe inspiring scenery. It was a lack, a deficit, a hole.

My poor wife. She was lacking something.  She was suffering a deficit. She had a hole where her experience of America had been. She had never been to Yellowstone. Worse yet, she had never seen the Grand Tetons or been to a rodeo. It was a tragic thing.
Think about it. A geyser had never erupted, throwing a column of water 30 feet in the air within her sight. A bucking bronco had never tossed a cowboy on his head with her as a witness. A mighty granite peak capped with snow had never reared itself up in northwestern Wyoming to dazzle her vision. She was bereft, my poor wife. I felt terrible for her. I vowed to do something. 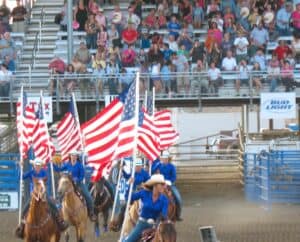 At the rodeo in Cody, Wyoming the nightly festivities begin with a generous helping of flag waving.

Cody, Wyoming is the rodeo capital of the world. Cowboys gather here nightly each summer to vie with one another in trying to stay astride bucking, writhing beasts, or challenge each other in trying to sling loops of rope over the heads of panicked calves while riding hard after them on horseback.
“This,” I said to Marianne. “This is a good place to begin.”
At Cody the festivities begin with a generous helping of flag waving, moist-eyed salutes to the military, the lusty singing of the national anthem, fresh-faced cowgirls with the stars and stripes riding in formation. And then the cowboys get down to the business at hand, the business of dominating farm animals with dash and bravado. 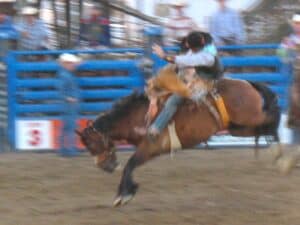 A bucking bronco had never yet tossed a cowboy on his head with my wife as a witness.

The wife was unsettled by the sight of an infant bovine yanked off its feet, wrestled onto its back and wrapped up in rope by a full grown man. Chalk up one for the homo sapiens. The wife was downcast.
But then the farm animals fought back. A bull tolerated a man sitting on his back for just about as long as it took for the gates to open, and then he set that man down on his butt in the dirt with an air of indignity that was a wonder to behold. Next, a bronco did about the same thing to another man, and suddenly the animals were ahead. The wife cheered.
The cowboys tried to answer back by chasing some more calves around the ring but they could not recover their earlier swagger and in the end had to admit they had been beaten by a set of dumb grazing beasts. 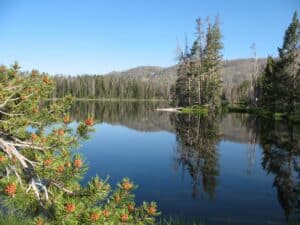 Achingly beautiful scenery can be found at Sylvan Lake in Yellowstone National Park.

The wife, tender hearted thing that she is, was glad to see the farm animals asserting themselves so nobly in the face of such bald attempts to humiliate them and was put in the mood to see more inspiring examples of animal nobility, this time in the wild, an hour’s drive west at Yellowstone National Park. The next day we headed there.

One of the primary reason visitors come to Yellowstone is to see large animals in the wild. However, Yellowstone has much more to offer. Achingly beautiful scenery is everywhere to be found, such as that which presented itself to us at Sylvan Lake. The placid waters of this pristine mountain lake fringed round with fir trees are enough to wring tears of gratitude from even the most jaded nature photographer. The wife was moved. 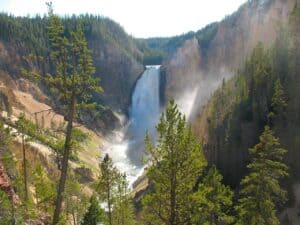 The awesome sight of the majestic Yellowstone waterfall is about as much splendidness as a reasonable person can stand.

She had visited the Canadian Rockies and toured the Alps but she had never suspected that such regal beauty resided within the same country that proudly trumpets such tacky fare as Branson, Missouri and the Wisconsin Dells.
Further on up the road at the Grand Canyon of the Yellowstone the awesome sight of the 24-mile long canyon with its majestic waterfall is about as much splendidness as a reasonable person can absorb in a day, but there’s more.
Driving south out of the park and into the adjoining Grand Teton’s National Park, the site of the towering granite peaks, snow mantled even in July, rising bluish-gray above the waters of Jackson Lake, elicits a sense of the sublime. The scenery here is among the best America has to offer, and the wife was seeing it for the first time. 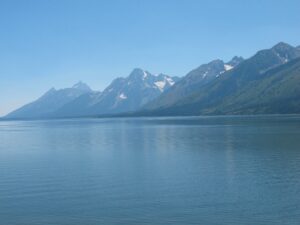 The site of the towering granite peaks rising bluish-gray above the waters of Jackson Lake elicits a sense of the sublime.

Advertisements
She suddenly realized how deep and dark that hole had been, the hole we were rapidly filling with the many treasures of northwestern Wyoming.

Jackson, Wyoming is an old west town that is neither as old nor as western as it pretends. The famous town square wasn’t built until 1904 and the residents are mostly transplanted easterners from the nation’s capital with a decidedly conservative point of view, prone to a love of big energy, high caliber rifles and tailored golf courses. These are cowboys with a sense of privilege, lobbyists in Stetson hats, gunslingers who work for the CIA. This is Dick Cheney country. 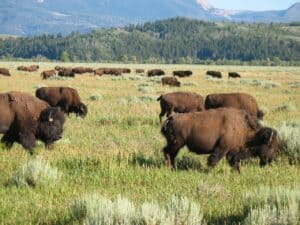 Our guide brought us into the midst of a bison herd where we stopped to dine among the shaggy beasts.

While having breakfast in a former blacksmith shop turned gourmet coffeehouse, we overheard a middle-aged man in cowboy boots wearing a Rolex declare, “I’m a Social Democrat at heart, but I’m a Republican.” The wife and I exchanged quizzical glances.
Later, outside a rustic storefront selling high end jewelry we heard a woman say, “The ranch foreman will have to wait, I’m going to DC next week to lobby against Medicare expansion.” A black crow was perched on the cornice of a false front building, squawking like mad. I said to the wife, “That’s easily the noisiest black in Jackson.” 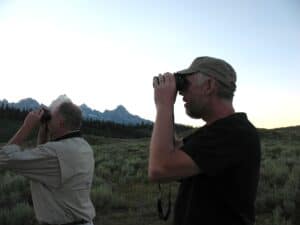 We set out in a Land Rover armed with binoculars and swept the horizon in search of game.

The name Jackson “Hole” refers to the 48-mile long valley bordered by the Teton Range on the west side and the Gros Ventre Range on the east. The town of Jackson sits at the sound end of the valley. Half way up the west side is the Jackson Hole Ski Resort, one of my favorite places to ski in the US.  In summer it remains a vibrant, active place with mountain biking, tram rides and outdoor concerts. Teton Village at the base of the mountain offers a variety of dining, shopping and nightlife.  The wife was most appreciative.

Down in the valley we went in search of wildlife. Brushbuck Scenic Wildlife Tours provides a four hour safari in the 330,000 acres of Grand Teton National Park. 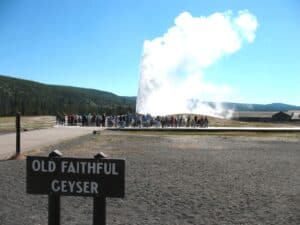 The most noted geyser of all is Old Faithful, erupting faithfully every 90 minutes, sending a powerful jet of boiling steam high into the air.

We set out in a Land Rover armed with binoculars and swept the horizon in search of game. We glimpsed some pronghorn antelope, mule deer, grouse and elk, most of it a long way off. Mark, the spotter, was doing his level best, but it took the wife’s eagle eye to spot a coyote sitting in a gulch 50 yards away watching us.
Dan, the driver and guide, brought us into the midst of a bison herd where we stopped to dine among the shaggy beasts, and then we wound our way back through the woods and enjoyed the site of beavers at work before returning to our starting point. The Brushbuck Tour was worth the price but as is often the case in these parts the best animal sitings are accidental.

The creme-de-la-creme of animal sitings, a black bear.

As we drove back into Yellowstone the next day we glimpsed a moose grazing in a clearing, and then later on, the crème de la crème of animal sitings, a bear. Of course, a string of cars were stopped, the occupants craning their heads and snapping pictures. A ranger kept watch and discouraged the drivers from pulling over and getting out. The bear lumbered along, oblivious to all the attention. It disappeared into the woods and that was that. Show over.
Later that afternoon we saw a deer and her fauns grazing outside our cabin window not 10 feet away. That put the finishing touches on a full day of wildlife viewing, noble beasts aplenty, enough to satisfy the wife, city girl that she is, soothing balm for the pain of having waited so long to discover this place. But there was one more thing. 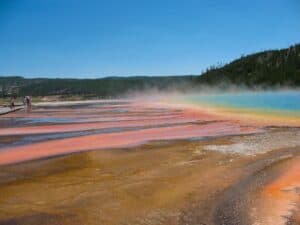 Geologically, Yellowstone is part of the original continent. Virtually everything else, the Rockies, the Appalachians, the coasts, Texas, Florida, etc. are agglomerations onto this original piece of ground. Before anything else was here, this section of America was here.
Perhaps because it has always been above water, exposed to the elements, the earth’s crust in Yellowstone is thinner than in other places. The heat of the earth’s interior is closer to the surface, which has resulted in a good deal of rambunctious volcanic activity. In fact, the whole area is one immense volcanic caldera, a super volcano that has blown its stack so violently over the past couple hundred millennia all that’s left is a thin layer of crust perforated with sulphurous vents allowing boiling steam to escape in geysers. 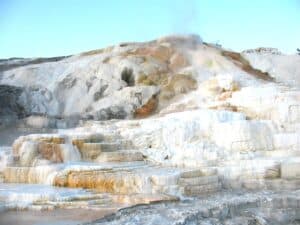 The most noted geyser of all is Old Faithful, erupting faithfully every 90 minutes, sending a powerful jet of boiling steam high into the air. But throughout the Upper Geyser Basin steam vents burble and seethe, threatening to blow. Marianne and I toured the Upper Geyser Basin on rented bicycles and witnessed several impressive eruptions. Along the way we also saw colorful springs rendered in Day-Glo blues, greens and oranges created by the unique mineral content of the water.
The Grand Prismatic Spring a few miles north at the Midway Geyser Basin is the largest hot spring in the park at 370-feet wide. Its steaming mists glow cerulean blue above golden sands streaked orange with mineral deposits, nature’s paintbrush. 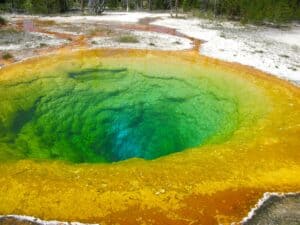 Along the way we saw colorful springs rendered in Day-Glo greens and oranges by the mineral content of the water.

Further on up the road, Mammoth Hot Springs are an ever changing tableau of tiered calcium deposits, fashioning wedding-cake-like formations of dripping white minerals, slick and snowy-white, like something from another world.
The way the earth shapes and colors itself here is a unique part of the Yellowstone experience. Nowhere else on earth is this type of beauty on display in just this way.
For natural beauty, for abundant wildlife, for stunning scenery and a unique western experience, Yellowstone and the Grand Tetons are unrivaled. 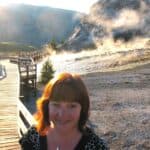 My poor wife had somehow gotten to this point in her life without having experienced them, a sad lack. But we had addressed the problem with a heavy dose of northwestern Wyoming, and she was feeling much the better for it.
We had filled the hole. 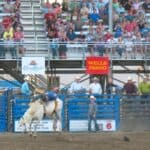 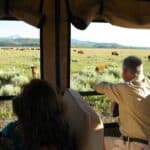 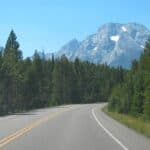 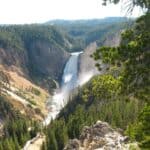