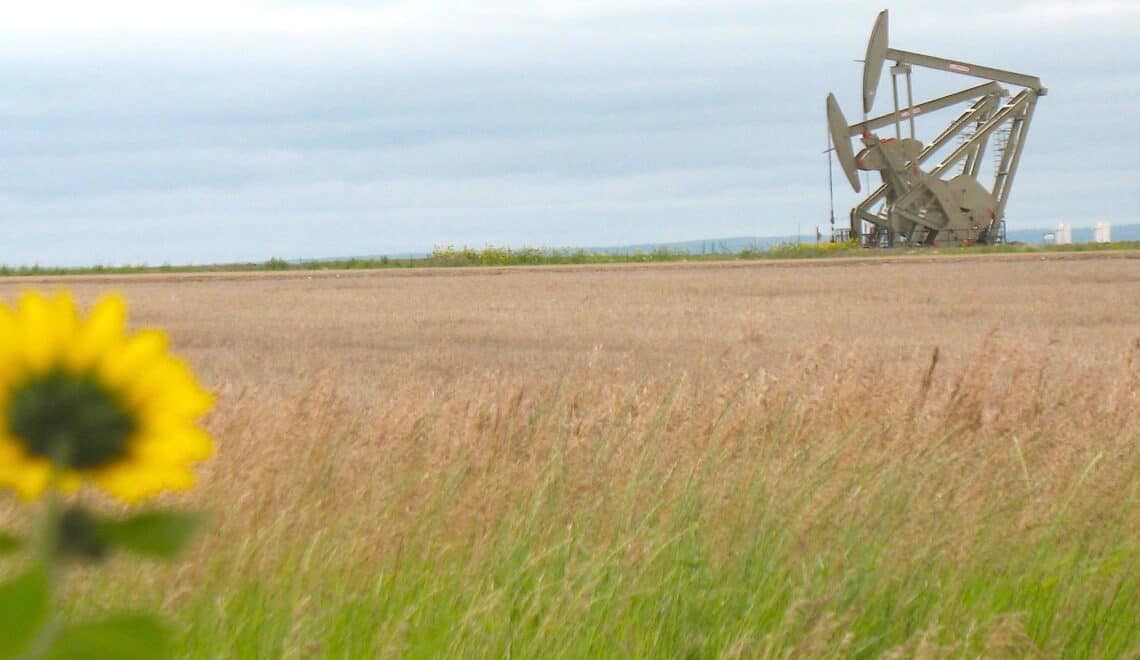 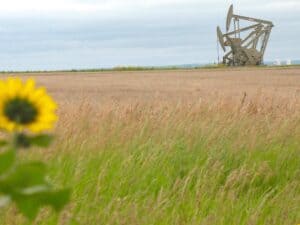 In and around Williston 4,000 oil wells tap away at the ground every day. North Dakota is now the second largest oil producing state in the country.

Waiting for a cheeseburger at the McDonalds in Williston, North Dakota I noticed something I hadn’t seen for a long time.   The manager was irritated with his staff, snapping at them, frustrated by their incompetence.  My first thought was that this man was not equal to his position.  But then I began to think differently when I saw a sign in the window that said:  Due to the Employment Shortage the Dining Room May be Closed.  Please Use the Drive-Up.
It occurred to me that Williston was indeed a different sort of place, which was why I had come here in the first place.  Williston is experiencing something few other American towns have experienced for a long time; they have far more jobs than they have people to fill them.

In Williston Walmart has doubled its hourly wage to $17 per hour in a desperate attempt to keep people.

The manager’s frustration with his employees had to do with the fact that most of his staff were newly trained, not because the restaurant was new but because his previous staff had quit, moving on to better jobs and higher wages, forcing him to rehire, and this wasn’t the first time.  This had happened again and again.
As it turns out, it is almost impossible to keep staff at low paying jobs in Williston these days, resulting in a maddening cycle of training and retraining.  Few workers remain long enough to master their duties.  The ensuing lack of competence can drive management around the bend.
The Walmart in Williston finally caved and doubled the hourly wage from $8.50 to $17.  Truck drivers and common laborers now make more than $70,000 a year in Williston.  Oil field workers command six figures.  The unemployment rate in Williston has plunged to 1%. 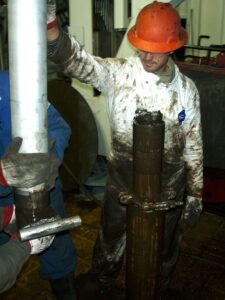 More than 7 billion barrels oil lie in the Bakken Formation. Extracting it has already made America a net exporter of oil.

Williston is booming and it all has to do with a vast underground rock formation that contains more than 7 billion barrels of oil and 6.7 trillion cubic feet of natural gas, a formation called the Bakken Formation.

Kuwait on the Prairie

The Bakken Formation covers more than 200,000 square miles of Montana, Saskatchewan, Manitoba and North Dakota.  Geologists have known of its existence since 1953 and understood its potential for energy production from the start.  But the Bakken Formation was not effectively exploited until 2008 when the advent of rock fracturing technology (“fracking”) permitted access to its vast resources.
As a result North Dakota has now become the second largest energy producing state in the US, outstripping Alaska.  In and around Williston 4,000 oil wells tap away at the ground every day, and more are on the way.  Former farmers, scratching out a living on the bleak North Dakota plains, have become overnight millionaires leasing their land to big energy companies.  It is estimated that 12 new millionaires are created each week through leasing agreements. 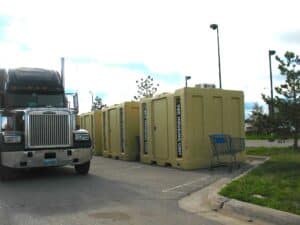 But to look at Williston you don’t see a gleaming new Houston or Kuwait City.  You see a small town shocked by its sudden collision with good fortune. This place had a population of less than 13,000 in 2008.  The population was actually declining when the oil boom hit.  Now the population stands at more than 26,000 and is projected to double again in the next three years, and every three years after that as long as the oil and natural gas hold out – and they are projected to hold out for a long time.
To look at Williston today, you see the next major American city in its infancy, trying to take its first steps, and the results are by turns whimsical and frightening.

On Route 85 just north of town workers are hammering away at what will be a spanking new Hampton Inn.  Across the street a rival Holiday Inn is being thrown up as quickly as possible.  Lodging here can’t keep up with the pace of new arrivals.  The town is routinely booked up.  Discount hotels charge $200 a night.
Housing is a major issue.  People arriving here to snatch up high paying jobs find themselves living in tents or sleeping in cars.  The Walmart parking lot became a makeshift campground until shoppers had trouble navigating the helter-skelter of RV’s and pop-up tents to find a parking slot.  Now Walmart has chased them off. 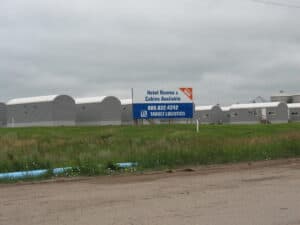 Self-contained housing units at a “man camp” in Williston, ND. These SCU’s sleep four and include kitchens and private baths.

Logistics companies like VEC Technology and Target Logistics have come to the rescue with modular housing.  VEC’s so-called “house” is an 8’x10’ plastic cube offering all the comforts of a tricked-out shipping container.  It costs $25,000.  Target logistics have erected “man camps” consisting of row upon row of plastic Quonset huts.  These so called self-contained units (SCU’s) sleep up to four and include kitchens and private baths.  They rent for $400-$600 a month.
The man camps are Spartan and a lot like living in a box, but they’re about the best bang for your buck in Williston.  Renting an apartment here can be brutal.  One room apartments rent for as high as $2,500 a month.  And buying a home?  A two bedroom single wide manufactured home fetches $250,000.  Set that against a national average of $37,000 and you get an idea of the housing crunch in Williston. 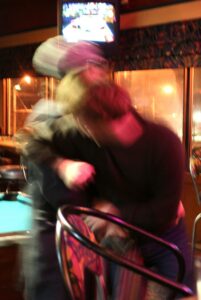 Bar fights are just one of the problems that plague a town where men outnumber women by almost 2-1.

Thankfully, help is on the way.  Developer KKR is fast-tracking a sprawling new subdivision that will include 810 apartments, 737 single-family homes, a park, playing fields and recreational facilities.  Surely it’s only the start.  But until supply catches up with demand there will be problems.
Advertisements

The man camps are aptly named.  They consist almost entirely of men.  It is estimated that the male population in Williston outnumbers the female by almost 2-1.  This has made it a happy hunting ground for prostitutes and exotic dancers and a dangerous place for unattached single women.
The number of rapes and sexual assaults has increased dramatically.  Williston now has a rape rate nearly four times the national average.  The high profile case of Sherry Arnold, a local schoolteacher out for a jog who was abducted and murdered by two drunken oil field workers has raised alarms.  The undermanned local police force is doing what they can but nights in Williston can still take on the flavor of a Wild West town with fights, brawls and raucous displays of public drunkenness.  It is not for the faint of heart.

What’s happening in Williston may allow us to say goodbye to this fellow and his ilk.  And what a blessing that would be.

So Long, My Dysfunctional Friends

All in all, Williston bears all the earmarks of a classic American boomtown, the rowdiness, the exploitation, the crime, the opportunity, and the making of fortunes overnight.  Williston’s experience is especially eye opening when set against the rest of the country where joblessness and declining wages have become the norm.  But Williston’s prosperity may be an indication of good things to come for the rest of us.
With the oil being extracted from the Bakken Formation the US became a net exporter of gasoline for the first time since 1949 in February of 2012.  Increased oil production combined with a decline in domestic demand due to high pump prices and better fuel efficiency has set us on a path that loosens the shackles imposed by Middle Eastern oil.
We can now foresee the day where American involvement in the Middle East is reduced commensurate with a reduction of our national interests in the region.  Happily we may someday arrive at the conclusion that the dysfunctional family that is the Middle East is no longer our problem to solve, which will reduce the provocation that our presence causes there and lead to a reduction in the threat of terrorism. 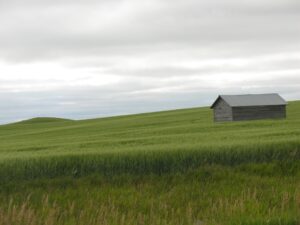 Beneath this sea of grass lie enough oil and natural gas to make Williston the next major American city. With that comes promises and challenges.

The Cost of Fast Food

Granted, it may be a bit of a stretch to draw a line between a frazzled McDonald’s manager in Williston, North Dakota and the flagging of interest by Al Qaeda in the murdering of Americans, but stranger correlations have turned the hinge of history.
In any case, the new boom in American energy with all its costs and benefits is the story of progress.  Where it takes us will certainly raise new questions and concerns even as it reduces old ones.  But will that get me my cheeseburger any faster?
To someone who isn’t paying attention it may just seem like lousy service at a fast food restaurant, but if you listen closely you can hear the sound of pages turning. 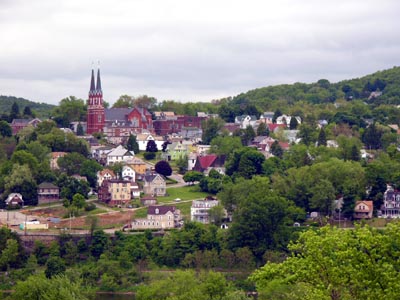 Running on Empty: A Strange Visit to the Pennsylvania Oil Sites 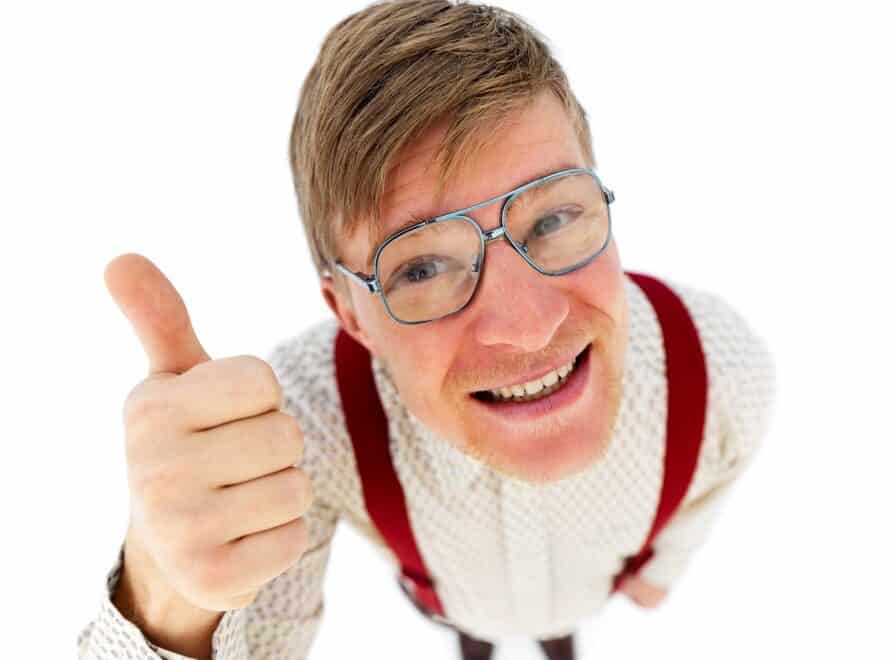 What Would Jefferson do? Time Traveling at Thomas Jefferson's Monticello