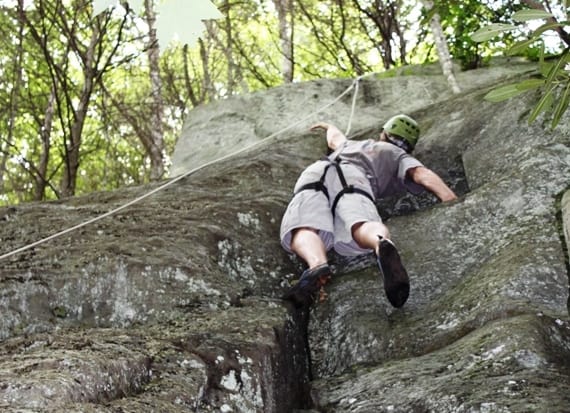 Rock climbing requires a strategy that won’t maroon you two-thirds of the way up.  Click any picture to enlarge.

Right around the corner from Appalachian State University in Boone, NC the outdoor outfitters at Foot Sloggers offer 2 hour climbing classes through their affiliate Rock Dimensions.
For $75 you can face off against 50 foot rock faces in the Pisgah National Forest. It’s a great way to challenge yourself with ropes and carabiners and, not coincidentally, it’s a great way to burn calories.

How to Lose Weight Without Doing Anything

The same week my brother and I took up the challenge, researchers at Appalachian State discovered something exercise enthusiasts have long suspected. People who exercise vigorously continue to burn extra calories long after they’ve finished working out. After working out hard for 45 minutes, men in the study burned an extra 190 calories while at rest. Combined with the 500 plus calories they consumed while exercising, the total calories burned topped 700.

In other words, they grew leaner in repose. They were able to lose weight without doing anything, something charlatans and snake oil salesmen have been promising for decades. Ah, but there’s a catch. You have to exercise first.

Any vigorous exercise will do, but you must break a sweat to get the post-workout burn. The day my brother and I headed over to Foot Sloggers it was 85 degrees in the shade. But we would have broken a sweat if it was 30. Rock climbing is killer good exercise.

Rock climbing is team sport, involving two people, one to climb, and the other to control the ropes and prevent injury.

Rock climbing requires a fair amount of upper body strength, particularly from those over 40, an age group unaccustomed to hauling its ever increasing bulk up ropes, rocks, netting and other impediments, having retired from such activities – perhaps wisely – at an earlier age.

On analysis, however, rock climbing is a great activity for any age. Although it may be frustrating and laborious at first, it pays off in an absorbing trial that combines the rigor of physical exercise with the tactical challenge of a good board game. Think of it as golf with grit.

To climb a sheer rock face engraved with crevices and riddled with knuckles, pocks and narrow ledges, requires a strategy, one that won’t maroon you two-thirds of the way up with nothing to do but lunge desperately for the next hand hold. Climbers are often seen peering upward, mentally mapping the wall above them, trying to figure a way forward.

No rock climber ever has to be reminded that the reward is in the journey.

They will usually have help from a partner. Rock climbing is a team sport, involving two people, one to climb, and the other to control the ropes and prevent serious injury.The man on the ground is the belayer, feeding out the rope and locking it off should the climber fall, preventing a fatal plunge.

The belayer can also study the wall, calling out suggestions to the climber. “Grab that outcropping to the right.” “There’s a toehold just to the right of your left foot.” The military has long recognized rock climbing as an excellent combination of coordinated exercise and team building skills.

No rock climber has ever had to be reminded that the reward is in the journey, but at the same time, most rock climbers know the triumph of having reached a goal by pressing forward against what might seem like impossible obstacles. Unlike many experiences in life, the goal is almost always within sight and the effort is usually rewarded with measurable progress. But that doesn’t mean it’s without pain and humiliation.

The Unique Vibe of Boone, NC

The region around Boone has the most rugged topography in the eastern United States.

Boone is a town of 17,000 residents situated in northwest North Carolina. Nestled on the eastern slope of the Blue Ridge Mountains, Boone is within 75 miles of the highest point in America east of the Mississippi. The rock here is a complex mixture of granite and other materials that have been squeezed, fractured, faulted and folded by millions of years of geologic activity. The region around Boone has the most rugged topography in the eastern United States.

Although its history reaches back to its founding in the early 1800’s by the nephews of legendary explorer Daniel Boone, the town today is mostly a college town, home to Appalachian State University. The school draws students from Charlotte and Winston-Salem, and plenty of them. 66% of Boone’s population is between the ages of 18 and 24, so the vibe is a laid-back combination of college town funkiness and old hill-folk charm.

The week my brother and I took up the challenge, researchers discovered something exercise enthusiasts have long suspected.

The surrounding area is serviced by several outfitters offering rafting, hiking, caving, canoeing and rock climbing. Foot Sloggers is located in the middle of town, surrounded by bistros, bakeries and popular eateries like the Black Cat Burrito and Melanie’s Café. Rock Dimensions, located inside Foot Sloggers, offers a slate of half day and full day climbing expeditions and instruction for groups of 2 to 12. We were a group of four.

Our Fellow Climbers, Exceptional Beings All

Ryan, our guide, was relaxed and friendly, patient and thorough, incapable of becoming annoyed no matter how many times we incorrectly tied our ropes or failed to lock off our carabiners. He had a deep background in climbing, having once scaled the famed El Capitan over the course of 5 days, sleeping in a hammock on the sheer rock face during the night and picking his way up through narrow fissures and precarious toe-holds each day.

We were accompanied by Harrison 12 and Mackenzie 13, two precocious youngsters, much enamored of their own accomplishments and competing with each other to impress. Harrison claimed to have a boating license and be an expert hunter, having killed and eaten a squirrel on a recent expedition. Mackenzie was strongly opinionated on just about every subject and somewhat loud, albeit remarkably articulate. It later came out that she was being homes schooled, along with her two sisters (one of whom, she informed us, was suffering horribly from eczema) and was concentrating on becoming an actress – a full day of her studies each week being devoted to drama and theatrical exercises, which she laid out to us in great detail.

Both of these youngsters came from wealthy households and were offspring of what folks around these parts call “half-backs”. Half-backs are well-to-do sorts who moved to Florida years ago to escape the cold but then found the summers s0 unbearably hot that they bought summer homes in the mountains of North Carolina and moved halfway back.

Fold together the country club set with suburban college kids and old time mountain folk and you get a pretty good idea of the demographic mix of northwest North Carolina. Regardless of their socio-economic background, Harrison and MacKenzie could climb rock.

If it is somewhat humbling to take up a physically demanding sport like rock climbing in your later years, it is an order of magnitude more humbling to do so in the company of youngsters who clamber up the rock like monkeys, scaling the same terrain you’re struggling over as if there’s nothing to it, stopping to bicker and make jokes with each other while you grunt and grimace, your fingers clinging tremblingly to a ledge, sweat streaming down your face.

Here I am taking a break.

Ryan starts you off with a lesson in belaying, feeding out the rope and locking it off, showing you how to monitor the progress of your partner until he summits, and then guiding him down as he rappels back to earth. You do this a few times and then change places.

The proper gear for climbing is essential and is usually provided by the outfitter. In addition to the ropes, cleats and carabiners, climbing shoes are indispensable. With a fit like ballet slippers, these shoes are remarkable for allowing you to gain a toehold on the merest button of an outcropping.

One of the first challenges in rock climbing is to trust your gear and your guide. When you hear a seasoned veteran like Ryan telling you that you can put all your weight on a toehold the size of a subway token, you must trust him. The toe of your shoe and your clenched-tooth determination to keep from falling will keep you there.

Better than Snake Oil: The Rewards of Rock Climbing

Up you go, finding purchase on narrow ledges, wedging your shoulder into slender crevices, swinging your leg up to hook your instep on a tiny notch of rock. Before long you are amazed at what you’re doing.

If you do fall, it’s not the end of the world (unless your partner is caught napping). The rope will snatch you up and leave you bouncing gently in the air. You catch your breath and carry on. When, at length, you finally hook your elbows on the edge of the cliff and pull yourself up like you’re emerging from a swimming pool you feel a mixture of relief and elation. Then you’re rappelling down the wall, touching earth and ready to do it all over again.

In the course of things you will likely get a few scrapes and bruises, and, as the morning wears on, your muscles will grow tired, your limbs begin to quiver and the going will become tougher. By the time you’re finished for the day, you will be bone weary, dripping with sweat, smeared with dirt and powerfully thirsty. But you will have the pride of having accomplished something physically demanding and mentally challenging.

And now with the findings of researchers at Appalachian State University you will get something more from your rock climbing experience. You will get the certain knowledge that as you sit around after you’ve showered, as you watch TV or doze off in your recliner, you are burning calories, growing leaner, even in repose, and that’s better than snake oil any day.

"Where is Tara?" Atlanta’s Gone with the Wind Legacy

The Dark Camps of War: Revisiting the Horrors...