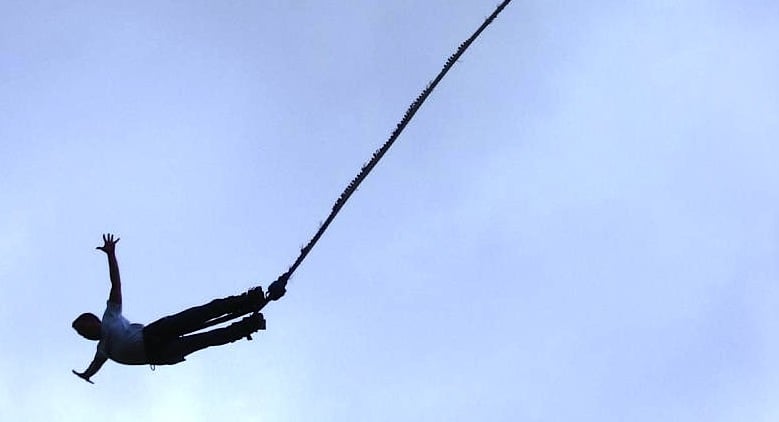 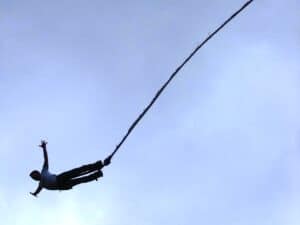 When you’re falling, all your blood, all your tissues, seem to rise up within you.  I needed this one for my bucket list.

Sometimes travel can be a bitch.  On my way to Pigeon Forge I got a flat tire, went the wrong way on a one way highway, watched a 16-wheeler overturn in front of me, and witnessed some haz-mat guys spraying down a field that had been ignited by chemicals.  Oh, by the way, I was on my way to throw myself off a 60-foot tower and insert myself inside a giant rubber ball that would be rolled down a mountain.
I was not feeling too upbeat about my prospects.

Let’s be clear.  Pigeon Forge is one of the worst places on the planet.  Not that it doesn’t have a powerful appeal for a certain type of tourist.   But for me it was horrifying. 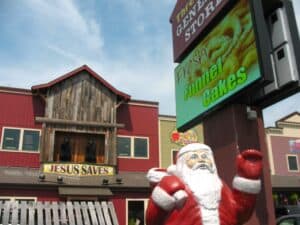 Pigeon Forge is a hodge-podge of tacky tourist traps, almost entirely soulless. Here Santa stands beneath an advertisement for funnel cakes and a sign that says, “Jesus Saves.” Say what?

Maybe it was because of where I had just come from.  The Mississippi delta, up around Clarksville, is a rich repository of valuable cultural traditions, a little rough around the edges, yes, but utterly authentic.  Pigeon Forge, on the other hand, is a hodge-podge of tacky tourist traps, culturally bankrupt, unflaggingly family friendly, and almost entirely soulless.
All up and down Hwy 441 are cheesy dinner theatres offering cornpone humor (men in bear suits, girls in daisy dukes), adventure golf, go carts, the Dixie Stampede (a horse and hillbilly show endorsed by Dolly Parton), a half dozen “As Seen on TV Stores”, outlet malls, Cooter’s Place (which is the Dukes of Hazzard’s Museum), and the “South’s Largest Christmas Store” – oh, joy!
But I was here for a reason.  To throw myself off a 60 foot tower and roll down a hill inside a giant rubber ball. 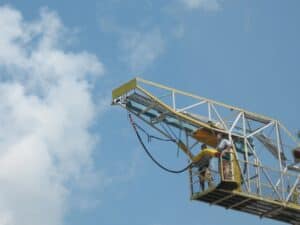 A bungee jumper stands at the edge of the platform, getting ready to take the plunge.

There are lots of places in America you can throw yourself off of a high place with a bungee cord attached.  But given the economy and the keen interest of the legal community many of these places are no longer open.  So Pigeon Forge, with its 60 foot tower and hover-craft sized air pit seemed like as good a place as any to get started.
I was familiar with air pits, those giant cushions filled with compressed air that make for soft landings for children in jumpy castles, and which, once upon a time, were employed by high school pole vaulters, until I broke my neck pole vaulting on one and sued the crap our of my high school, whereupon the NHSAA discontinued them for that purpose. 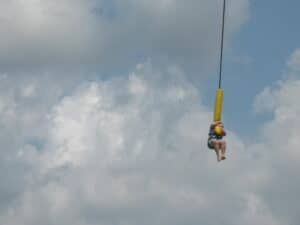 Bouncing at the end of the bungee cord. Like most women, this girl had guts. The tattooed guy that came after her lost his nerve and backed down.

Advertisements
Now, however, I was getting ready to plunge down into an air pit with a rubber cord attached, thereby checking off another box on my bucket list.  But before I would get my chance to do so I would have to brave some other hazards.

On the interstate, enroute to Pigeon Forge, I ran into a giant backup.  Everyone was slowing down to look at a crash, and had been for eight hours.  Two semis had collided and it was ugly.  When I finally got to the crash site I saw men standing in a blackened field with fire hoses.  Then I saw a 16-wheeler at the side of the road; its side caved in and torn open like a box of cookies savaged by a Labrador.  Further on I saw a second semi charred and shrunken, the victim of a horrendous blast. 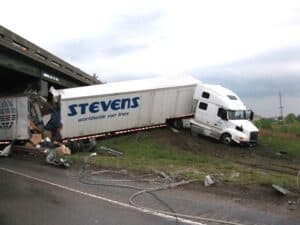 I saw a 16-wheeler at the side of the road; its side caved in and torn open.  50 miles on I witnessed something scarily similar.

I tooled on, accepting the tragedy for what it was.  But 50 miles on I witnessed something scarily similar.  A hundred yards ahead of me a 16-wheeler was descending an entrance ramp, getting ready to merge onto the freeway.   The truck dropped off the edge of the pavement, jerked back up, wangled back and forth like the head of a serpent, and then swerved and dove, banging down on the freeway in front of me, the cab turned sideways and throwing sparks.
I whipped around it, to avoid a collision, and carried on, checking my rearview mirror.  The interstate is a dangerous place.  But there was more.
My tire had a slow leak.  This had been going on for weeks.  But now, as I ascended into the Appalachians, things were getting intense.  Switches, ascents, plunges and swerves.  The final verdict was that I had stressed an already weakened tire and blown out the sidewall.  Had it happened on that winding road I might be dead, but thankfully it waited until I got safely into a small town and then gave out all at once. I limped into a tire shop with minutes to spare before closing and got it repaired.  My luck was holding. 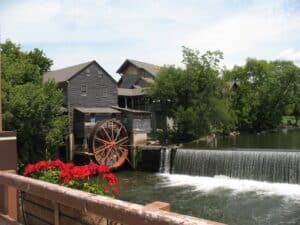 Pigeon Forge isn’t all bad. If you get off the main drag you can find a pretty spot like this outside the Old Mill Restaurant.

And then I found myself on a parkway.  Do you know what a parkway is?  It’s basically four lanes of freeway, moving at top speed with no shoulders and plenty of curves, usually with a broad median in between, heavily vegetated, and – if you were like me – so densely forested, you can’t see the other two lanes – the two that are running in the opposite direction.
To gain entry into this menace I had come over a bridge and descended into a small town.  As I was leaving the town I never noticed that the two lanes had expanded to four, and then diverged to form a parkway.  So I went barreling along, blissfully ignorant.  Until I decided to turn around.
I had missed a site I had wanted to see so I turned a U-turn and headed back.  Drivers were honking and flashing.  Weirdos, I thought and kept going – at 70 mph.  And then I saw the traffic.  Two lanes of it.  Also at 70.  I slammed on the brakes and cut the wheel hard.  I pounded my foot down on the accelerator.  I was just quick enough to stay inches ahead of the oncoming traffic as I gained acceleration.  My heart was pounding. 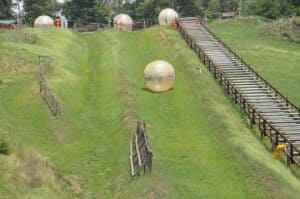 This is a Zorb. I am inside of it, rolling down the hill, going ass over tea kettle, fast.

The next day I was planning to throw myself off a 60 foot tower.  My wife said, “Maybe this isn’t such a good idea.”
Advertisements

Surrendering to the Void

I was looking up at a pussy.  Son of a bitch wouldn’t jump.  Tattoos and all.  He kept bending his legs, getting psyched.  But he could not make himself do it.  Finally he came back down, sixteen flights, head hung.  The only thing I had on him?  I know what an air pit is, and that damned pit was ten times the size of anything I had ever pole vaulted on – never mind that I was six times higher than the highest vault I had ever attained.
I walked out to the edge of the platform, heart beating fast, and felt that twinge – the one that goes, “This is scary and dumb.  Don’t do it.”  And plunged. 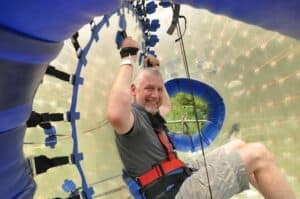 Here I am inside the Zorb, just before I started rolling.  I had been careful to wait until after Zorbing to eat lunch.

When you’re falling, all your blood, all your tissues, your whole physical self seems to rise up within you, yearning back to the place you came from, that safe place on top of the platform.  And just about the time you begin entertaining notions of surrendering to the void, of reaching down into the gravitational catharsis, no matter what it means, death, disaster, a new beginning, the cord snatches you back, with a resilient snap, a kind of good-natured smile, and sails you back up, dropping and bouncing, until it slackens, and they lower you, gently, into the pit and it ‘s over.
That was nothing to driving the wrong way on the parkway.
But tumbling in a ball?  That’s not so pure; that’s like the stuff your mind erases when you’re in a horrific crash: the tumult, the velocity, the verging violence.  Welcome to Zorbing. 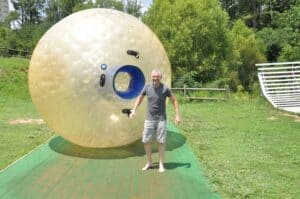 Liberated from my Zorb. You can see I am having a little trouble getting my sea legs under me.

There’s only one place in the United States to Zorb.  A bunch of Kiwis came up with this concept and have only been able to convince the good people of Pigeon Forge to take it on.  Here’s how it works:  You climb into a giant rubber ball, strap in, and get pushed down a long, steep slope for about a hundred and fifty yards.  That’s it.
You go head over heels about thirty times watching the sky and the ground whip around and around through the semi-transparent walls of the sphere.  Occasionally the ball bounces, dealing you a scary jolt, and then the ball rolls up a slight incline, slowing, and one of the attendants comes over and wrangles it to a halt. 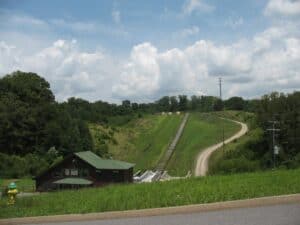 The Zorb hill. The whole thing is sort of expensive at $35 a ride, but apparently they only have six balls, so if they charged less, they still couldn’t accommodate any more.

Advertisements
A variation on the ride is the Water Zorb, where they fill the ball halfway up with water.  You slip and slide around the inside walls of the sphere as you tumble down the hill, getting soaked.  You can do this by yourself or with friends and family.  I can’t imagine how many inadvertent elbows and knees are administered to loved ones in this arrangement.
In any case, I survived my experiences with bungee jumping and Zorbing, and, perhaps more remarkably, I survived my trip to Pigeon Forge during which exploding semis, a ruptured tire and a wrong way drive down a shoulderless parkway had threatened to relieve me of life and limb.
I wound up my visit to this redneck Orlando by stopping for lunch at one of the many restaurants specializing in southern cuisine, which is to say various combinations of starch and fat served up in gratuitous portions. 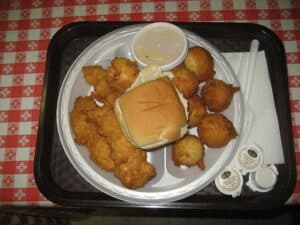 Southern Food. If bungee jumping and Zorbing couldn’t kill me, maybe this would.

These places all have names like Granny’s, Clem’s and Momma’s.  People sit with their thighs spread, their feet splayed out, and shovel it in.  This is “good ol’ fashion home cookin’’, and if you aren’t a candidate for diabetes after eating this slop, you can snuff yourself with endless silos of corn syrup and soda, as well as funnel cakes, ice cream, and fudge.
I left before I finished my meal.  Having survived Pigeon Forge and the trip to get there, I damned sure wasn’t going to let granny kill me now.

About the author:  Malcolm Logan is a freelance writer who specializes in US travel and US history, designing one day driving tours, seeking out interesting US destinations and exploring US adventure travel.