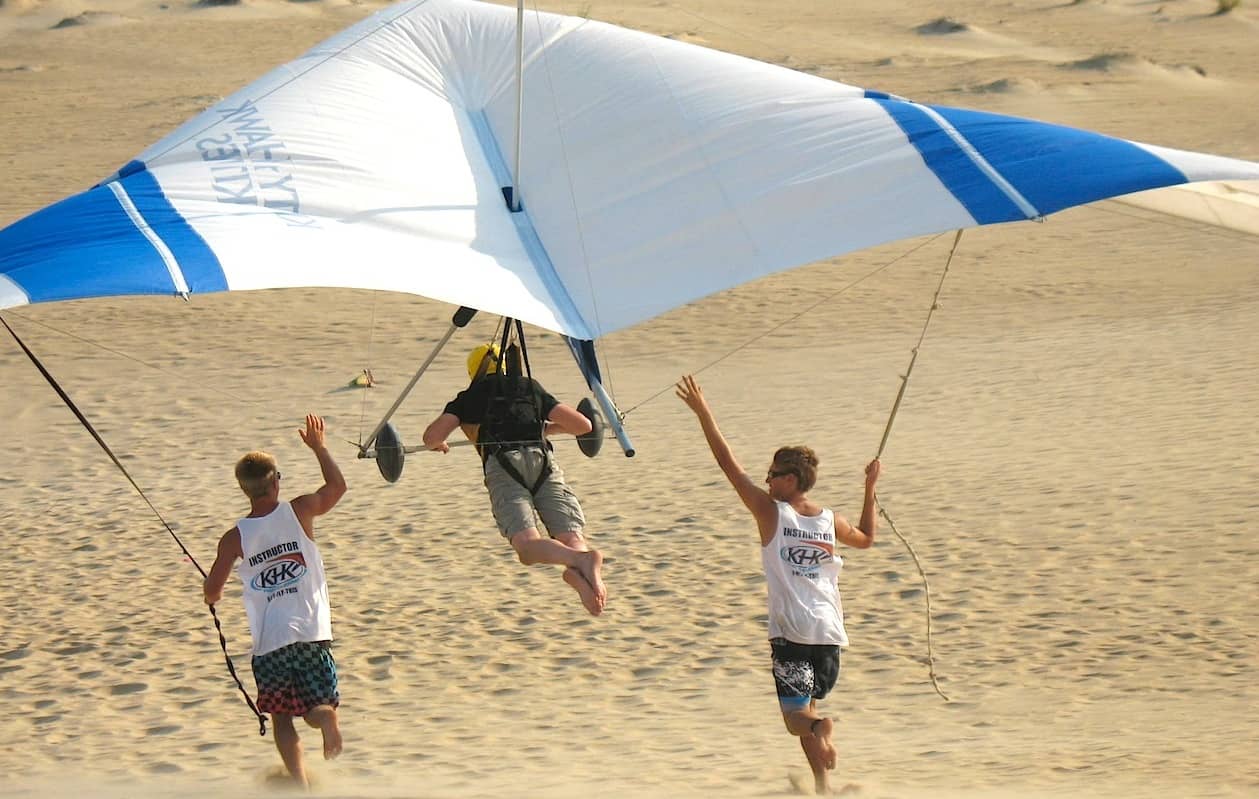 I ran down the slope, pulling in on the cross bar, and then the most miraculous thing happened. I left the ground.

Death from spinal fracture was the final verdict for Otto Lilienthal. Displaying a heady mixture of audacity and ingenuity, Lilienthal, a German engineer, had developed a heavier than air glider, flown it several times, tweaked its design and was working on a way to power it when the accident occurred. He fell from a height of 49 feet and broke his back. The year was 1896.

Four years later, a pair of bicycle salesmen arrived in Kitty Hawk, North Carolina from Dayton, Ohio intent on figuring out what had gone wrong. They sensed that Lilienthal had been tantalizingly close, that a mystery that had been haunting humankind for millennia was about to be solved.

What they eventually discovered was that Lilienthal had miscalculated the shape of the wings. (In truth, Lilienthal had struggled with a tendency of his craft to pitch forward, a flaw that had led to his demise.)

By adding camber (a curvature of the wing’s top surface) additional controls and an engine powered propeller, the Wright brothers improved on Lilienthal’s design, and on December 17, 1903, took flight, soaring 852 feet in 59 seconds. The world has never been the same since. Today, as you stand before a full scale replica of the Wright brothers flying machine at the Wright Brothers National Memorial at Kitty Hawk, you are struck by how much it resembles a hang glider. Essentially it is. Which explains why the Wright brothers chose the Outer Banks as the place to fly it. The dunes provide a high place to take off from and a soft place to land.

Oh, and there is one other thing that the Outer Banks provides in abundance. Wind.

The dunes at Jockey Ridge State Park are the highest and most expansive in the eastern United States. Click to enlarge.

When my friend Randy Gray and I arrived at Kitty Hawk Kites to take our first hang gliding lessons we were warned that it might be windy on the dunes. But as we trudged up a 60 foot dune to our launch site I was reminded of the scene in Lawrence of Arabia where a howling sandstorm drives sand and grit into the Arab’s faces as they march across the desert.

The dunes at Jockey Ridge State Park are the highest and most expansive dunes in the eastern United States. When you stand among them you can really imagine yourself in Saudi Arabia. Like they did for the Wright brothers, the dunes provide a perfect place from which to take flight.

When it comes to hang gliding, the dunes at Jockey Ridge provide a high place to take off from and a soft place to land.

But when our chief instructor from Kitty Hawk Kites, a fellow named Andy attempted a demonstration to show us how easy it was, the howling wind blew him straight up in the air, threatening to carry him out over the Atlantic to Europe, before he was able to fight his way back to earth. This was not good.

The five instructors gathered to talk matters over while we students looked on, shooting each other nervous glances. Finally, the instructors broke huddle and informed us of the situation. The wind was too intense to let us fly untethered, but they would run along underneath us, holding on to the glider by long cords so as not to let us get carried away. We could try this if we liked, but if we wanted to call it quits, we could take a rain check and return another day at no extra charge.

As Gray was reaching the end of his flight a sudden gust caught his wings, lifting him higher, nearly pulling one of the instructors off his feet.

One by one, our fellow students threw in the towel. But Gray and I had no choice. We were leaving the next day and would not be returning. We needed to fly today. Our instructors agreed to instruct us.

Flying a hang glider is a subtle business. You hang suspended from a harness beneath the kite within a triangular control frame. Just below your chest is a crossbar. By gently pulling it toward you, you catch the wind and ascend, by pushing it away you slow and drop.  One of the most common mistakes beginners make is to be too abrupt with the cross bar, thrusting and jerking on it, when what’s required is a soft touch.

Today, however, they told us to forget all that. We were going to have to push and yank on that cross bar like a slave ship’s oar if we were going to make any headway in this gale. They would hang on, they told us. They not let us be carried off by the wind. We nodded nervously and got into position.

After flying, I pose with Andy of Kitty Hawk Kites beneath the wings of the glider.

A quick look around summed up the situation. The sandpipers that frequent this area were attempting to do the same thing as us, trying to fly into the wind. They flapped their wings with vigor and thrust their beaks forward – and remained flying in place for a few seconds before being caught by a sudden gust and blown back end over end like punted footballs. I told Gray I would go first.

As I hooked into the bottom of the kite and lowered myself over the cross bar, the sand blew into my face, peppering the lenses of my sunglasses. When I bit back on my molars, I could feel the grit between my teeth.

Shouting over the howl of the wind, the instructors told me to stand up and start running. I needed to keep my chin up and the cross bar under my chest until I felt the lift. I ran down the slope, leaning over, pulling in on the cross bar, and then the most miraculous thing happened. I left the ground.

I have flown in jets, general aviation planes, float planes and para-sails. I have even been skydiving. But nothing matches the thrill of taking off in a hang glider.  I remained aloft, gently steering into that tempest for about 300 feet before tipping up the nose as instructed and landing on my feet.

Gray went next. Gray is an amateur aviator and loves to fly. When I proposed this trip to him, he jumped at the chance.  Flying feeds Gray’s primal urge to break free of the rules.  As a teenager he was something of a daredevil, taking all kinds of crazy risks. As an adult he is much more restrained, but flying allows him to indulge his wild, adventurous side.  Gray eagerly strapped into the hang glider. Using his skills as a private aviator, he quickly mastered the craft.

The Wright Brother’s National monument in Kitty Hawk. When the brothers first announced their accomplishment to the world, the newspapers took scant interest.

Our instructors let us fly a little longer as we got the hang of it, and so it was that during our last run, as Gray was reaching the end of his flight, a sudden gust caught his wings, nearly pulling one of the instructors off his feet. Had the tether slipped I could imagine what would’ve happened next.

To avoid pulling Gray off to one side, the other instructor would’ve had to let go too, and Gray would’ve been on his way. They would’ve yelled at him to push the cross bar out, to stall the glider and drop, but Gray would’ve ignored them, seeing the opportunity to test the capabilities of the craft. He would’ve pulled the cross bar in, gaining loft, grinning maniacally as he ascended into the clouds. He would’ve circled the dunes a few times, smiling down at us, ignoring our pleas to land, until an unexpected updraft pushed him even higher and he was a mere speck to us, 29,000 feet up over Albemarle Sound, heading toward France, a powerful wind behind him.

What it is, What it was

None of this happened, of course. The instructors did not let go of the tethers and Gray did not get his opportunity to fly away. Instead, we went back to the hotel and took showers, filling the bathtub drain with about two pounds of sand.

The Outer Banks have many charms, but for students of flight this place is second to none.

The next day we went to the Wright Brothers National Memorial in Kitty Hawk and learned all about the Wright brother’s remarkable achievement. We sat in on a lecture and saw the place where they first took flight. We climbed the launching hill and stood peering up at the imposing granite monument. Then we drove to Raleigh and parted.

I was headed to my next stop and Gray was headed home.
He was going home the way most of us do, aboard a commercial airliner. As usual, he would be crammed into a seat with his knees up around his ears where he would have to wrestle for an armrest and endure a seat back being lowered into his lap. The experience of flying would be an annoyance at best, a misery at worst.

But he would be returning home with the memory of what that first flight must’ve felt like, hanging in a glider, manipulating the elements, feeling the thrill of slipping the bonds of earth.  And he would be smiling.

About the author:  Malcolm Logan is a freelance writer who specializes in US travel and US history, designing one day driving tours, seeking out interesting US destinations and exploring US adventure travel.