Naval Gazing: Pondering the Cost of Defense on the USS Midway in San Diego 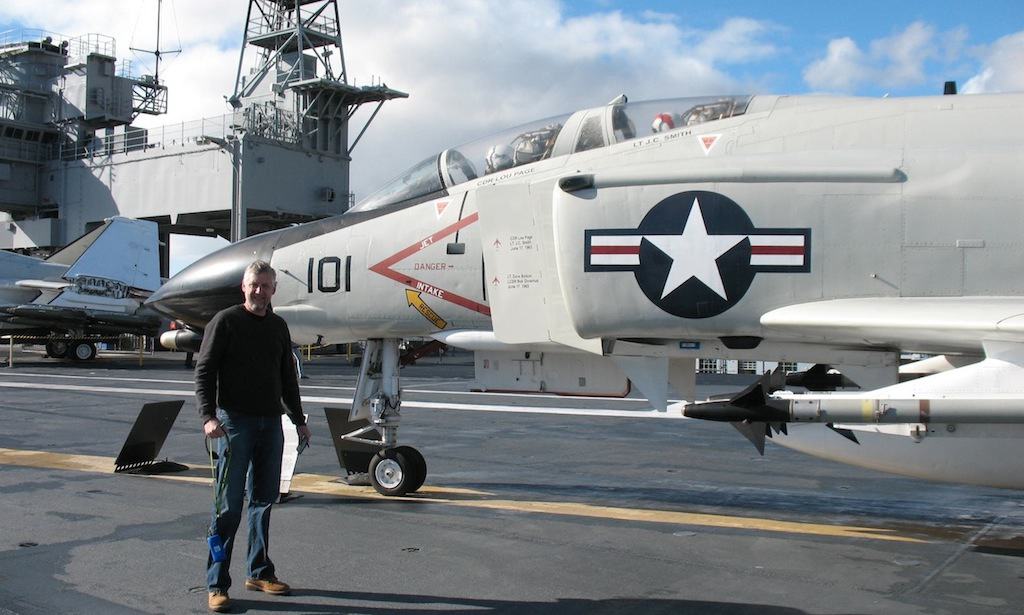 The US Navy got its use out of the USS Midway which was in active service for nearly 50 years. Now it’s in San Diego harbor where it can be toured, and it’s way cool.

Believe it or not, the Right and the Left are bickering.  But this time around it’s a good thing because they’re not arguing about whether or not to cut the US federal budget but where to cut it.  Which means most Americans have woken up and smelled the coffee.  We’ve got a problem and it’s called debt.
The solution, however, is up for debate.  Not surprisingly the Right is intent on shredding the social safety net, while the Left is hungrily eyeing Defense.
But as I stood in the War Room of the USS Midway, an aircraft carrier anchored at the wharf at San Diego, it occurred to me that budget cutting is only one way to save money, another way is to be smart about how you spend it. 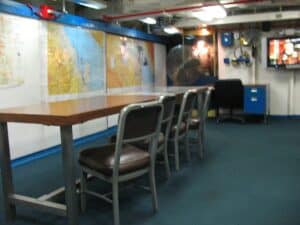 The War Room aboard the USS Midway was the command and control center for Operation Desert Storm, one of America’s finest moments.

A Blueprint for Efficiency

I have long considered one of the most underrated events in American history the assembling of the Gulf War Coalition during Operation Desert Storm in the Gulf War of 1991.  This masterstroke by then President George H.W. Bush involved the coming together of 34 nations, including nine Middle Eastern countries, in a concerted effort to push Saddam Hussein out of Kuwait.
The operation was orchestrated from the War Room of the USS Midway in the very place I was now standing.  Here, pinned to the walls, are the very same Persian Gulf battle maps that guided coalition forces in the assault. 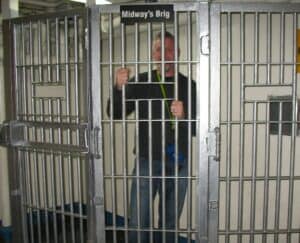 Locked in the brig aboard the USS Midway. A tour of the ship reveals five levels of this “City at Sea” including the jail.

Saddam didn’t know what hit him.  The war which had taken five months of careful planning and preparation was over in six weeks.  The brevity and effectiveness of the operation saved thousands of lives and potentially billions of dollars.  It was a model of efficiency, a blueprint for how future wars could be fought.
Sadly, however, its lessons were lost on Bush’s bumbling offspring, the deplorable George W. Bush, whose own Middle Eastern exploits were hasty, poorly planned and massively costly, wasting thousands of lives and racking up 3.2 trillion dollars in debt.
There’s more than one way to economize. 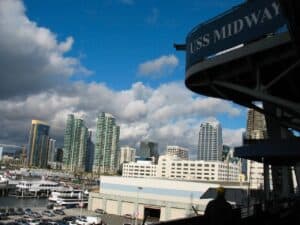 Downtown San Diego seen from the gangway of the USS Midway.

How to Treat a Drunken Sailor

Still, as anybody in business knows, you’ve got to spend money to make money.  The trick is to spend it wisely.  And as everybody on both sides of the political aisle now agree, the United States has been spending money like a drunken sailor and needs to treat its hangover.  The question is how.
Aside from extracting ourselves from two wars that have been pouring money down the drain for more than a decade, cost cutters are looking at other ways to pare defense spending, and here’s where the Right is getting its collective back up. 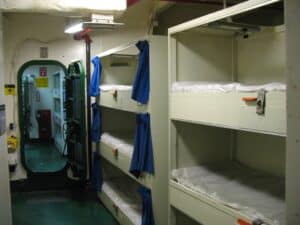 Crew quarters for enlisted men aboard the USS Midway were spartan.  These are the bunks.  Talk about economizing!

The tired old argument that any cut in defense spending impairs our defensive capability overlooks one of the guiding principles of conservative economic thinking as applied in every other realm, that sound fiscal policies will be free to emerge once insititutionalized waste is cleared out of the way.  And as any serviceman will tell you the military has long been a hotbed of insititutionalized waste.
This is not unique to the American military.  Armies by their very nature are sprawling bureaucracies with command and control structures that tend to lock in incompetence.  A smooth running military is not one that seeks to eliminate bureaucracy (that would be folly) but one that tirelessly seeks to root out inefficiencies.  And in this regard the US military is better than most. 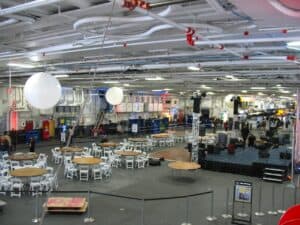 Among the four branches of military service, the Navy can be pointed to as the best at achieving this goal.  Not coincidentally, the Navy also has also shown a willingness to make tough cuts when necessary.

At the end of World War II the United States boasted the largest navy in the world with more than 6,700 ships in its command.  Five years later, the Navy had trimmed its battle forces by more than 90% to 634 active ships.  But what the Navy lost in sheer numbers it made up for in greater efficiency. 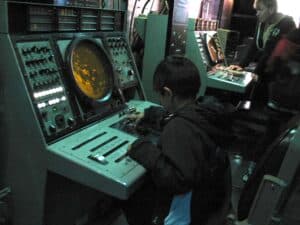 A little boy tries his hand at a radar station that once swept the sky for Saddam’s air force prior to the allied invasion that liberated Kuwait. The war was over in six weeks.

Advertisements
The new class of aircraft carrier, for example, displaced 45,000 tons compared to 33,000 tons by its immediate forebear, and accommodated 130 aircraft, compared to just 90.  This new carrier class was named after its inaugural vessel, the Midway, the ship I was now standing on in San Diego harbor.
The USS Midway, and the sparkling new carrier class it represented, was launched in March of 1945 at the end of World War II.  The Navy got its use out of it.
For the next 47 years the Midway patrolled the worlds oceans seeing action in Laos, Taiwan and Vietnam where it participated in the evacuation of South Vietnam in 1975.  In 1981 the Midway showed up in the Arabian Sea to monitor developments during the American hostage crisis in Iran and then sailed south to rescue 17 survivors of a downed civilian helicopter in the South China Sea.  But Midway’s finest moment came in 1991 during the Gulf War. 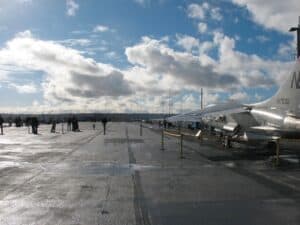 The 900 foot long runway on the deck of the USS Midway could launch one fighter jet every two minutes, a swarm of heavily armed aircraft.

A tour of the USS Midway is eye-opening in a number of ways.  If you’ve never been aboard an aircraft carrier, you can’t help but be impressed by the detail and extent of the accommodations aboard this “city at sea”.  In addition to the crew quarters, superstructure, engine room and mess, you can see the sick bay, laundry room, officer’s mess, chapel and brig.  And that’s just for starters.
The hangar deck of the Midway is an enormous indoor mid-level space more than three football fields long housing various aircraft as well as flight simulators, a theatre, a café, restaurant and gift shop.  Step upstairs to the flight deck and you’ll be awe-struck. 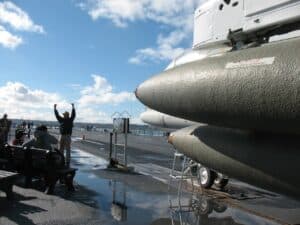 Tour guides aboard the USS Midway are former sailors who relate with enthusiasm the experience of having served at sea. Here Jim makes the all clear signal.

More than 900 feet long this enormous shipboard runway did the job the carrier was primarily designed for, launching 17,000 pound planes like the F-8 Crusader into the air by way of a powerful steam catapult that took plane from zero to 160 mph in 2.5 seconds.
Obviously, such awesomely powerful and precisely engineered mechanisms required highly-trained specialists for their operation.  The navy furnished them, as well as thousands of others at every grade level, making the ship and its multitude of operations as smooth running as a finely tuned watch.  Fully complemented, the Midway was home to more than 4,000 men, working in concert with remarkable efficiency, not unlike like the coalition forces that came together to bring the Gulf War to its swift and effective conclusion. 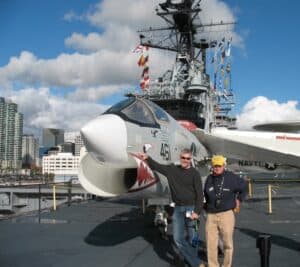 Standing by an F-8 Crusader on the deck of the USS MIdway with former Navy man Jim. The F-8 was a dogfighter that set records for speed and climb.

When capably led and properly executed, a military operation is something that saves lives and money instead of wasting them.  But for that to happen those in power must deal with realities.  Incompetence and inefficiencies must be identified and weeded out.  Curiously, these are precisely the same requirements needed for effective budgeting.
Judging by what I saw aboard the USS Midway, few organizations are better equipped to reduce costs by achieving efficiencies than the US Navy.  Its ships run with admirable precision and the Navy gets maximum use out of its tools.  To ask them to cut costs is a challenge to which they can rise, if we only ask them. 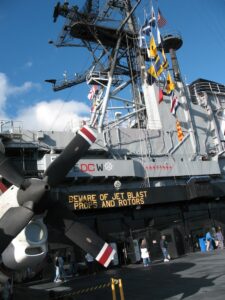 Beware of Jet Blast. Walking out the wrong door on the USS Midway back in the day could get you a face full of rocket fueled back wash.

First, however, the nay-sayers will have to step out of the way.  Every cut in defense spending does not impair our defensive capabilities.  Ironically, they may actually enhance them.
As proven by the Gulf War, a lean, effective and accountable military, coordinating with willing allies, working from a sound plan with clear objectives can achieve a net savings in lives and money.
On the other hand, pretending you’re succeeding when you’re failing, being fuzzy about your military objectives, ignoring and protecting incompetence, and going it alone with chest beating bravado, gets you into long, wasteful quagmires like Iraq, Afghanistan and Vietnam.  Our wallets should be closed to this kind of profligacy, no matter how frightened or outraged we might be.
Never forget?  How about never forgetting this?  It’ll save us more in blood and treasure than all the flag waving and drum beating we can muster. 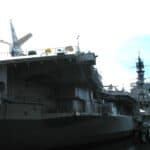