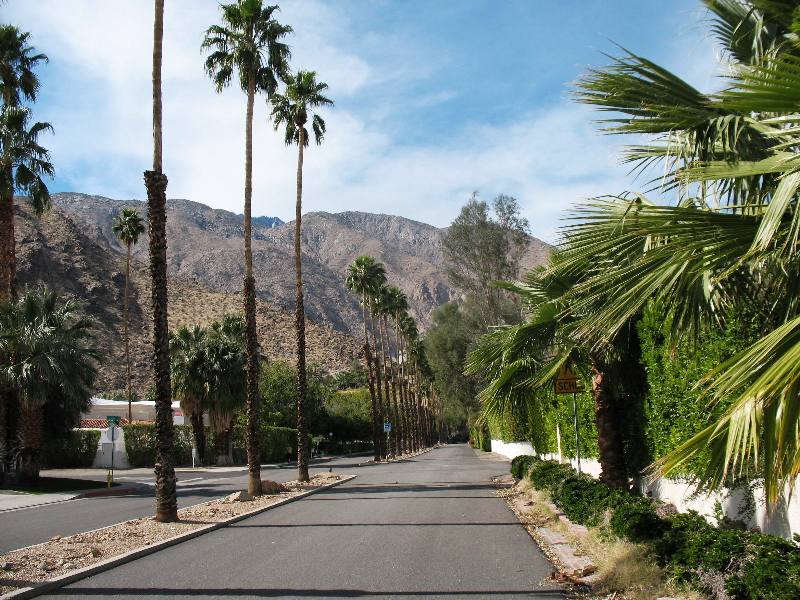 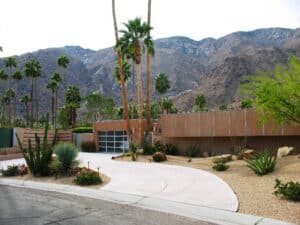 The Horace Dodge house. a perfect example of the Desert Modern architecture common in Palm Springs.

At Windy Point the wind is said to blow so hard that you are advised to wear goggles and a bandana to keep the grit out of your eyes. I was prepared with these accessories but hardly needed them. The day was sunny and still.

The dunes piled up against the base of the mountains stayed in pretty much the same place, undisturbed except by the tires of my ATV as I roared along, zipping through the hills, enjoying the first part of my perfect winter day in Palm Springs, California.

I had never driven an ATV before, but Jim and Michelle, the friendly proprietors at Off Road Rentals on US Highway 111, 4 miles north of Palm Springs, showed me a 10 minute video and gave me a 5 minute primer before sending me off.

First stop, Offroad Rentals, where I rented an ATV and hit the dunes.

In no time at all, I got the hang of it. Admittedly, I bogged down once and had to slide backward in deep sand for several yards before getting myself turned around.  Another time I nearly plunged nose first into a crater, an outcome that would’ve catapulted me over the handle bars and into the dune like a juggernaut.

But I avoided these calamities and enjoyed myself, tearing around, leaning far out to sweep my turns, feeling a surge of adrenaline as I powered up and over the dunes, rising from my seat before dropping down and twisting the throttle.

One hour is plenty of time to carve up the sand and, if scheduled at 10am when the establishment opens, leaves plenty of time to take in the other sites of Palm Springs, an oasis in the desert, as the name implies, and a legendary get away for Hollywood’s rich and famous.

Lifestyles of the Rich and Hospitable 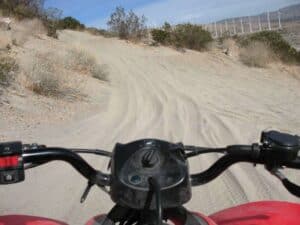 I mostly avoided calamities and enjoyed myself, tearing around in the sand.

You would think Palm Springs would be snooty and pretentious, but one of first things you notice, as you begin to explore it, is how down-to-earth it is. The homes around here are not of the sprawling ostentatious kind you find looming behind forbidding gates but are more the size of suburban homes in an average upper middle-class neighborhood. You can easily imagine kids riding their bikes up and down these streets. You actually do see people out walking their dogs or going for a jog. It’s all astonishingly self-effacing and a little difficult to square with the image of aloof and unapproachable Hollywood. Here, when someone passes on the street, you acknowledge them with a friendly nod and a smile. 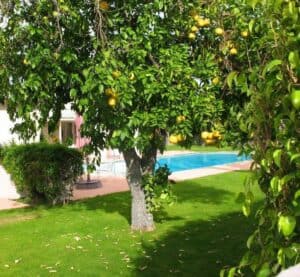 Wealth is everywhere. Mercedes and Jaguars are all over the place. The lawns are professionally manicured, and discreet service entrances are located around the sides. Yet for all that, the homes seldom exceed 2,500 sq ft, and as you stand in the street, you are seldom more than 30 feet from the front doors. Which makes Palm Springs the perfect place to tour on a bike.

BIKE Palm Springs takes a simple concept and executes it seamlessly. Walk in, plunk down a modest rental fee, and ride out on a plump-tired two wheeled cruiser which is yours to peddle around for the next four hours. 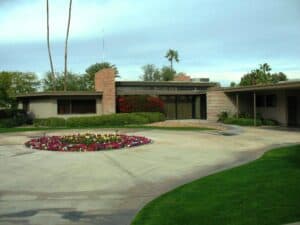 If you are a fan of the movies, you can purchase a detailed map of the stars’ homes, and before long you are standing in front of the former residences of Frank Sinatra, Ronald Reagan, Bing Crosby, Elizabeth Taylor and many others. There are more than 60 homes on the map.

The houses themselves are notable for their architecture.  Desert Modern is a school that grew to prominence in the 1950’s and 60’s, distinguished by long, low sleek lines, cantilevered roofs, and airy spaces of glass. The homes are complemented and offset by the desert landscape, and more than half the homes are the work of celebrated architects. For those who admire residential architecture, Palm Springs is a treat. 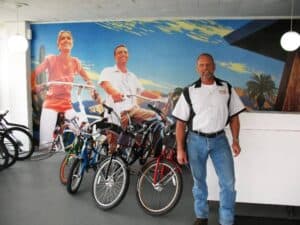 How to Kill Four Hours in No Time

When Rocky, the proprietor at BIKE Palm Springs, told me I had four hours to kill I was fairly certain I would return before then, but ended up using every second. The day was beautiful and as I tooled along, the air was fragrant with the scent of fruit trees and eucalyptus.

My eyes were enchanted too. As I got off my bike to peer into Bob Hope’s former backyard, I was struck by the colorful tableau of orange trees, green lawn and blue swimming pool. As I stood admiring the front lawn of Marilyn Monroe’s former home, I was charmed by the lush landscaping, and the cascade of bushes and flowers that tumbled nearly into the street. 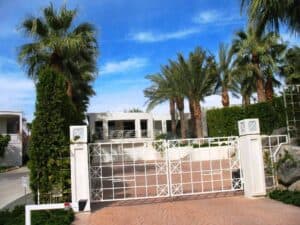 Some homes were notable for their plainness. Dean Martin’s home looked no different than something you would see in any 1970’s era neighborhood. Elvis Presley’s home had all the character of a motor hotel. On the other hand, the home of Horace Dodge (president of Dodge Motors) was graceful and sleek, low lying and blending into the surrounding desert; and Debbie Reynolds’s home was noble and grand.

After checking out the homes, I headed to downtown Palm Springs where I had a late lunch at Melvyn’s Restaurant. Operated as a private supper club in the 1930’s, the dining room had once welcomed luminaries like Howard Hughes, Salvador Dali and Spencer Tracy. Today it exudes an atmosphere of gracious elegance and old world charm, and features dishes like roast duck breast, veal chops and lobster pie. The food was quite good. 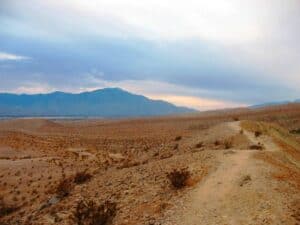 Trekking to the Palms

After turning in my bike, I headed out to the Coachella Valley Preserve in Thousand Palms. Although the name is undoubtedly hyperbole, the sentiment is genuine. Back in the 19th century this part of the desert was known for its intermittent clusters of palms, signs of oases.

At the visitor center, a dense cluster of about three dozen palms provides a surprisingly cool canopy from the heat of the sun, a good deal short of a thousand, but you get the idea.
From the visitor center, hiking trails meander out, rambling up and over high ridges to distant oases. You can spend the day here, hiking out to these natural sanctuaries while admiring the desert flora and fauna. 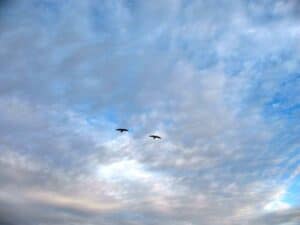 I only got halfway to one before the sun began to go down and I had to turn back. (It was winter, after all.) But I did get to take in a stunning sunset vista from the top of a ridge, watching the distant mountains turn blue in the dusk and the lights of Palm Springs twinkle on.

Today the glory days of Palm Springs are mostly behind it, but there is nothing fading or peeling about the face it shows the world. The flashy 50’s and 60’s ambiance it once had is as fresh as if it was built yesterday, and the prevailing attitude of the inhabitants is friendly and openhearted.

Drive, ride or hike, there are plenty of ways to take it in, this palm studded oasis of the desert.  At the end of a perfect winter day, Palm Springs remains forever warm.