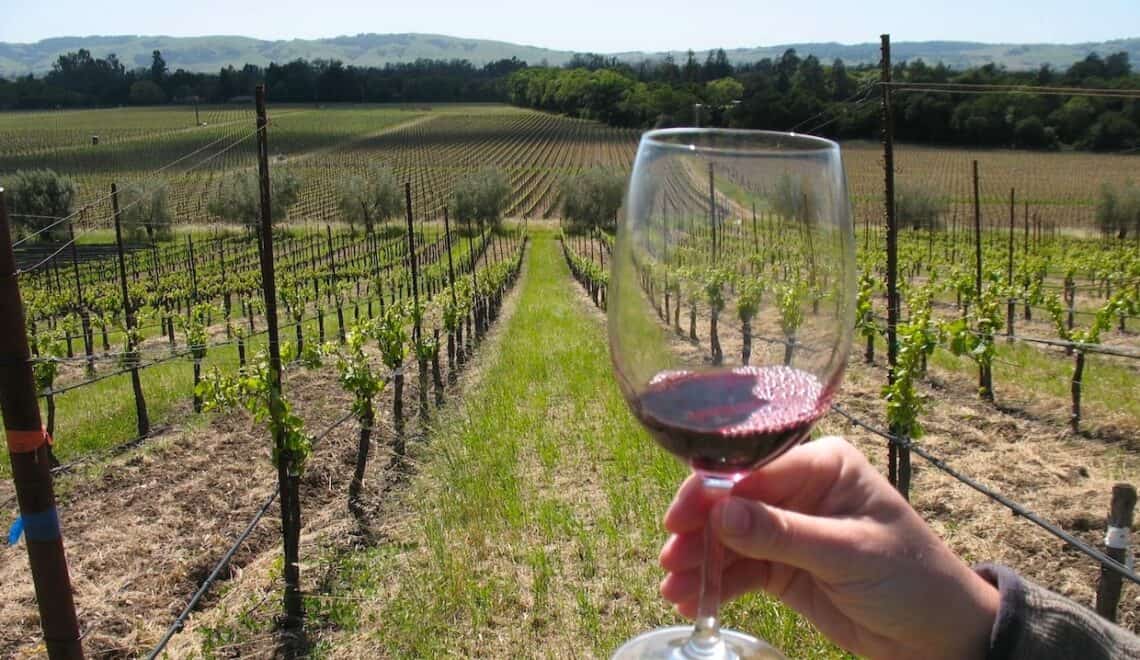 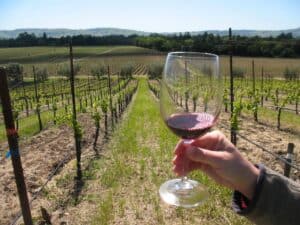 The vineyards of the Sonoma Valley needn’t deter the newly sober as long as a good surrogate comes along to do the drinking.

I have quit drinking.
After 40 years and thousands of gallons, it’s time to give my liver a break and wash the toxins out of my brain.  Two months into my new sobriety I can’t say I’m feeling sharper mentally, but I’m hoping to be quicker of wit before long.  In the meantime, I am still capable of doing dumb things, like going to the Sonoma Valley and touring the wineries.
Actually, to be honest, such a thing only looks dumb on paper, although it would be hugely stupid if I were one of those white knuckle alcoholics climbing the walls for lack of drink.  To my surprise, however, my nightly consumption was more of a habit than a jones.  I can be in the company of booze without lunging for the bottle. 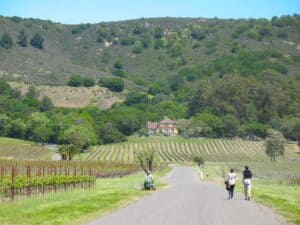 With more than 60,000 acres under vines and some 1,100 growers the Sonoma Valley has earned global recognition as a wine growing region.

So I was going to the wine country dry.  All I needed was somebody to act as my surrogate when it came to imbibing, and as it turned out I knew just the person – my wife.

Marianne is my best friend.  In fact, it goes deeper than that.  She’s the best friend I’ve ever had.  More than that, I find her delightful.  I’m charmed by her.  Frequently, I just want to grab her up in my arms and kiss her.  She’s just the dearest thing to me, and I do not exaggerate.  I’m blessed to have such a wife.  But we are not 100% compatible.
In fact, we’re incompatible in some interesting ways.  She likes science fiction, I like history, but we both like books.  She likes Asia, I like the West, but we both like traveling.  She likes gardening, I like business, but we both like growth.  She likes wine and I like beer, but we both like drinking – one of us a little too much. 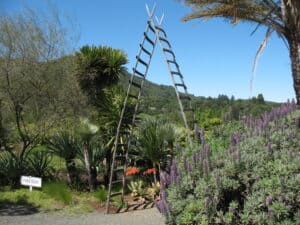 At the Benzinger Family Winery flowers and herbs are cultivated to attract hummingbirds, ladybugs and bees which reduce pests naturally.

So a trip to the Sonoma Valley offered something for both of us.  She would get to learn about the cultivation of grapes while sipping wine.  I would get to know more about the history and business of wine making while driving through one of the most lush and beautiful regions of the country.  We would be like a vintner’s blend.

Our first stop was the Benzinger Family Winery in Glen Ellen, California.  This 30 year old winery was established on land bought from a former pot grower and has developed into a poster child for Biodynamic farming, an ultra-organic technique that eschews chemicals in favor of natural balances to enrich the soil.  Insects and birds are introduced to fight pests and rodents.  Cattle and sheep roam the property to introduce natural manures.  Flowers and herbs are cultivated to attract hummingbirds and bees. 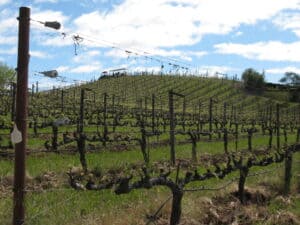 The Benzinger Winery offers one of the better tours in the Valley. A tram takes you through rolling green hills laced with vines.

Advertisements
As you walk along, the scent of lavender and eucalyptus is in the air.  Birdsong is in the trees.  Storybook puffs of clouds drift across the sky.  It’s really quite lovely.
The vineyard sits in an extinct volcanic caldera 800 feet above sea level.  Here they cultivate seven different grapes producing chardonnay, sauvignon blanc, and oonapais, a powerful wine with intense body and texture, or so my wife tells me.
The Benziner Winery offers one of the better tours in the Valley.  A tram takes you through rolling green hills laced with rows of vines.  Then you are shown the processing facility and led deep into a cave where the barrels of wine are aged.  Finally you end up in the tasting room where you sample the different varietals – or you wander the gift shop looking at souvenir corkscrews, aprons and coasters, as the case may be. 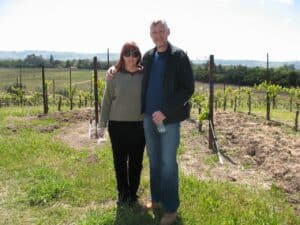 My wife and I are incompatible in all the right ways. The things we don’t agree on are perfectly agreeable to us.

The Judgment of Paris

Our next stop was the Valley of the Moon Winery.  Established in 1863 it’s one of the oldest wineries in Northern California.
Valley of the Moon boasts one of the largest, most comfortable tasting rooms in the Valley.  Marianne bellied up to the zinc and granite bar and tried samplings of petite syrah, sangiovese and zinfandel while I lounged around on the sofa and thumbed through picture books, boning up on the unique climate of the Sonoma Valley, which enjoys abundant sunshine and moderating coastal temperatures ideal for growing a wide variety of grapes. 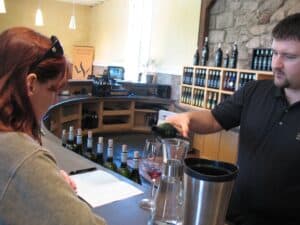 Marianne bellied up to the bar at Valley of the Moon and tried samplings of petite syrah, sangiovese and zinfandel.

With more than 60,000 acres under vines and some 1,100 growers large and small, the Sonoma Valley has earned global recognition as a winegrowing region.  But its fame is relatively recent.  In spite of the fact that some vineyards are more than a century old, only 50 vineyards were operating in the region at the repeal of prohibition in 1933.  As late as 1960 only 12,000 acres were under vines.
It wasn’t until the famous “Judgment of Paris” incident in 1976 that wine production in the region exploded.  That year a wine competition in Paris included a blind taste test where, unbeknownst to the snooty continental judges, California wine was introduced.  The eight French judges, swirled, sniffed and sipped and, thinking it was French, declared a California Chardonnay the winner.  When they found out the truth, they nearly died, and the California wine industry was off and running.

Getting down to earth.  At the Gundlach-Bundschu Winery the tour is enhanced by periodic stops to imbibe. You stand beside the grapes and sip the wine.

Getting Better with Age

Our last stop was the Gundlach-Bundschu Winery, the Valley’s oldest continuously operated family owned winery.  The tour here is hands down the best because instead of providing a cursory overview of the operation ahead of the main event, the always eagerly awaited visit to the tasting room, the tasting room comes along on the tour.  The guide stops at various points along the route, pops open a bottle and pours out a sampling while explaining something interesting about it.
While standing on a hillside above a placid pond overlooking the sweep of the valley, she explained how grapes have a life span, how over the course of decades they increase in flavor and complexity until they reach their peak and then begin to decline.  She tried to pour me a glass of Pinot Noir, but I had to demur.  I had already reached my peak, I told her.  I had stopped drinking; I was trying to get better with age. 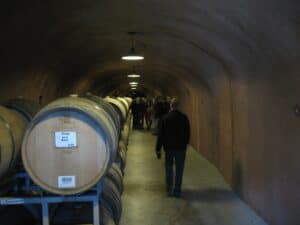 We were led into a 10,000 square foot underground maze where thousands of oak barrels are stacked in long rows and the aroma of wine hangs in the air.

Advertisements
Marianne, who is ten years younger than I and has always been a more sensible and moderate drinker, gratefully partook.
Next we walked out into the vineyard itself and stood amidst  rows of vines while our guide poured out a cabernet.  She pointed to the distant mountains and explained how the nearby Petaluma gap allows coastal fog into the valley, acting like a giant plant mister, keeping the valley floor 10-degrees warmer than the neighboring Napa Valley, sealed off from the coast, where the cabernets are more aggressive, lacking the subtle complexity of those from Sonoma.  It wasn’t the last shot she got in against Napa. 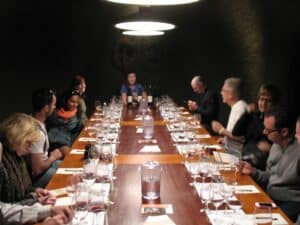 Our tour wound up in a subterranean cavern outfitted with a long oaken table like something out of the Knights Templar.

Next we were led into the cave, a 10,000 square foot underground maze where thousands of oak barrels are stacked in long rows and the aroma of wine hangs in the air.  The barrels are not transported in and out to fill and empty as necessary but rather sit there indefinitely as the wine is pumped in and out through hoses.  Turns out the flavor can be affected if the barrels get knocked around.  Who knew?
Our tour wound up in a subterranean cavern outfitted with a long oaken table like something out of the Knights Templar.  Our guide poured out three more varietals and pointed out that the Gundlach-Bundschu tempranillo was one of only eleven produced in the state.  “They can’t make this over in Napa,” she said. 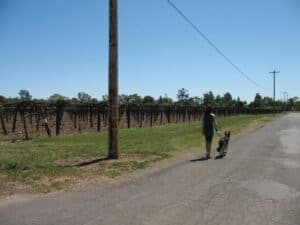 Ironically, the quiet rural roads and lush green vineyards of the Sonoma Valley make you appreciative of all the things in life that don’t involve drinking.

As the others sipped and savored, I asked about the rivalry between Sonoma and Napa.
It’s sort of like the difference between preps and hippies, she explained. The Napa wineries consider themselves privileged and elite, and they get all the media attention, while the Sonoma wineries are more spiritual and earthy and humbly produce what many consider a superior product.  “It’s a friendly rivalry,” she was at pains to add.

In any case, I was glad that I had chosen the Sonoma Valley to support with my patronage.  Everywhere we went the growers were friendly and down-to-earth, and the wine was excellent, according to Marianne.

A vintage to be savored and prized.

Advertisements
But the really remarkable thing was that I had enjoyed myself without taking a single sip.  In a strange way I might have enjoyed it even more by not drinking.  Without the impediment of wondering when the next glass was going to be poured, I had been able to concentrate on all the other good things about the wineries, their history, natural beauty, and unique business cultures.
Turns out there’s more to life than drinking.  Like bees and hummingbirds, lavender and eucalyptus, coastal fog and green rolling hills covered with long rows of vines.  Oh, and one more thing, a good wife to enjoy it with, a prime vintage, one to be savored and prized.
Life without alcohol: I’m feeling sharper all the time. 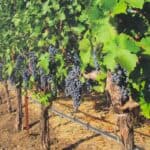 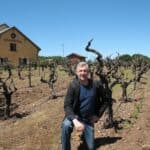 Valley of the Moon Winery 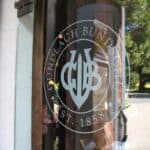