Taking the Plunge: Skydiving with My Daughter in Erda, Utah 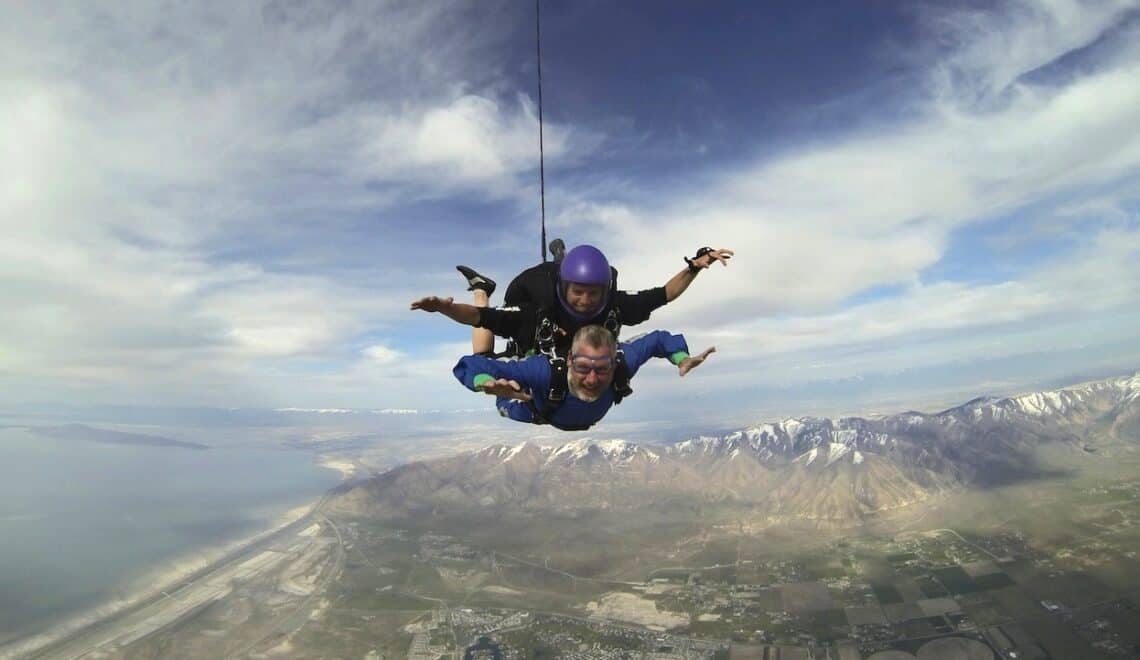 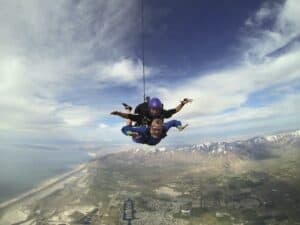 It’s easy to forget stuff when you are plummeting earthward at terminal velocity. (Click any picture to enlarge)

You would think that jumping out of an airplane at 13,000 feet would be terrifying but for Belle and I it was more of a relief. The whole experience had not started off well.

The previous day I had gotten a call on my cell phone while we were in the middle of the Nevada desert. The reception was poor. The call went to voice mail, and when I was finally able to pick it up, it was the jump master at Skydive Utah asking if we could move back our jump time, which was scheduled for the next morning.

I had no problem doing that but the jump master had ended his message by saying, “We need to hear back from you on this,” hinting at the prospect of something dire, such as the cancelling of our jump, if we didn’t call back in time.  Problem was we were way out in the middle of the most desolated and uninhabited region of the United States, and the call would simply not go through. 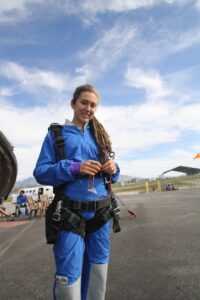 I was surprised when Belle said yes so quickly.  If you ask a half dozen people if they would like to go skydiving, more than half will say no.

As the clock ticked down toward 5pm when Skydive Utah would be closing for the night, I tried again and again to make the call.  Finally, with five minutes left, I got through and okayed the proposed schedule change. The jump time was moved back two hours. It was just the beginning.

Getting Around to it

As I think back on it now, I don’t really know why I waited so long to try skydiving. I suppose I was scared, although I don’t remember being afraid.  Maybe it was the money. It’s not cheap at $192 a pop. More likely it was something I was planning to do at some point, when the time was right. And if I was going to do it, I certainly wanted to do it in a cool place, where the views would be spectacular, and it only seemed right to share the experience with somebody special.

I was surprised when my daughter said yes. If you ask a half dozen people if they would like to go skydiving, most of them will say no—for obvious reasons. 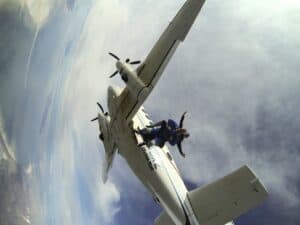 After several delays that made what should’ve been a 90 minute experience drag on for seven hours, we finally took the plunge.

What’s more, not long ago, the idea of spending vacation time with her parents struck my daughter as about as interesting as making license plates in a federal penitentiary. But all that was behind her now. Belle said yes without hesitation, and we were ready to go.

It was going to take longer than we thought. The way it was described the whole thing should’ve take about 90 minutes: 30 minutes to watch a safety video and fill out the forms,  30 minutes to suit up and get a last minute safety check, 15 minutes to board the plane, take off and climb to altitude, and 15 minutes to jump, land and wrap things up. 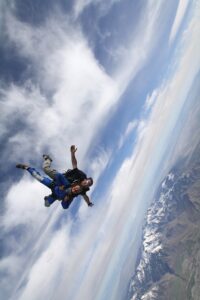 Hey, that’s my daughter up there!

Our first delay came enroute. After rocketing along through the Nevada desert at 90 miles per hour, I had difficulty taking my foot off the accelerator, and a Utah state trooper pulled me over. The ticket writing ceremony ate up twenty minutes. In consequence we arrived late for our scheduled jump time.

Because we were late another group got in ahead of us, so we had to wait for them. But as it turned out they were delayed as well due to mechanical issues with the plane. A mechanic was called and that ate up another two hours. The plane was flight tested, which consumed thirty more minutes. There were a few more tweaks under the hood, which took another half hour before the first group was finally ready to go.

Among them was a dating couple, and the guy was using this occasion to propose to his beloved. As a result, the whole process was a little more of a production than it would normally have been. We helped carry out a thirty square foot tarpaulin with the words WILL YOU MARRY ME? written on it, and then stood on the corners of it in the middle of the landing field to keep it from blowing away while the happy couple parachuted down.

The free fall is harsh and noisy and tumultuous. But then your chute opens and the world changes.

It was great except the girl never noticed it, and when the guy approached her on landing to ask her what she thought about his proposal, she said, “It was awesome!” thinking he was talking about the jump.

Finally, seven hours after our original jump time, we climbed into the plane and took off.

That Which is Ludicrous

It occurs to me that one of the most courageous (or insane) people ever born was the first person to jump out of a perfectly good airplane wearing a parachute. As it turns out that was a fellow named Leslie Irvin, who did so not because he needed to rescue someone, or escape some terrible fate, or reach some inaccessible place, but because he was in a movie. The year was 1914 and Irvin was a stunt man, and the producers wanted something really exciting for their film. 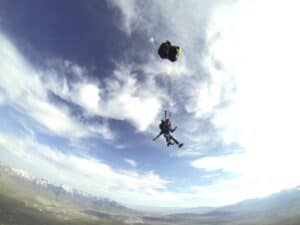 You are plucked up beneath a spreading bloom of colorful nylon and the air goes silent.

The movie was called Sky High and is long forgotten but the stunt Irvin came up with caught the attention of a lot of people who do need to rescue people, or escape something, or reach inaccessible places, namely the military.

The Army Air Service’s research team developed a much improved parachute in 1919 that included a rip cord, back pack and auxiliary chute, but didn’t get serious about using it for another 21 years.  I guess the idea of dropping soldiers out of airplanes seemed ludicrous until the Nazis sealed off Europe to the allies.

Another thing that seems ludicrous is that in a hyper-litigious society that won’t even allow most hotel swimming pools to have diving boards it’s perfectly okay for untrained people to jump out of airplanes at 13,000 feet as long as they watch a thirty minute video and fill out some forms. Capitalism, I do love you. 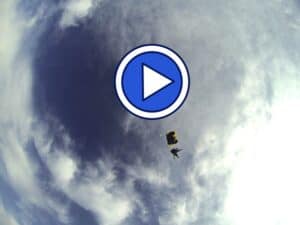 In 1957 the first commercial skydiving schools were founded, and in 1986 Jack Guthrie founded Skydive Utah in the town of Erda, thirty minutes west of Salt Lake City near the shores of the Great Salt Lake. Since then Guthrie has racked up more than 10,000 jumps and helped thousands of first-timers like Belle and I muster the nerve to take the plunge.

It helps that you’re not doing it alone. The rules of skydiving require that your first jumps be done with a tandem master, an experienced skydiver who is strapped to your back and makes sure everything goes right.  For this reason, I found tandem skydiving less daunting than bungee jumping, which is a more solitary commitment to plunging from a very high place. 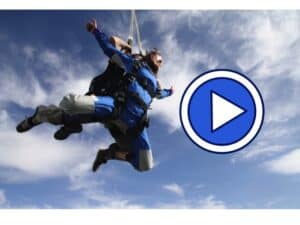 My tandem master was a young woman named Jo. She made sure I was cinched up tight against her and knew how to throw my head back and spread my arms before we stepped out into space.

We stood in the doorway with the wind blowing in. I was surprised at the force of the wind; it actually pushed us back, so that I had to make a conscious effort to step forward and position myself to jump. Then it was one-two-three and we were out.

Two things shocked me: how cold it was up there, and the violence with which the wind blasted my face, rushing up through my sinuses, giving me a nasty sore throat that lasted several hours. Maybe it was because during the initial free fall I was looking straight down, admiring the surface of the planet, when I should’ve kept my chin up. You can see that in the video. When the videographer comes flying over and offers me his foot to hold onto, I look up, and that helps.

As she swept in for the landing, Belle lifted her legs so her tandem master could make contact first. Then she stuck her landing.  That’s my girl!

It’s easy to forget stuff when you are plummeting earthward at terminal velocity. You get sort of dazzled. Belle forgot to lift her arms, and you can see that in the video too. In fact, when she steps out of the plane you will see her tumble over a couple of times, and then the tandem master reaches down and lifts up her arms, which stabilizes her.

The free fall is harsh and noisy and tumultuous. Except for the novelty of it, it’s rather unpleasant. But then your chute opens and the world changes. You are plucked up beneath a spreading bloom of colorful nylon and the air goes silent. You float. It’s wonderful.

I enjoyed the scenery, the vast uninhabited expanse of the Great Salt Lake with its hoary fringe of salt, the snow-capped peaks of the Wasatch Range, the towers and spires of Salt Lake City, and far below us like a postage stamp on a table top the landing field of Skydive Utah. 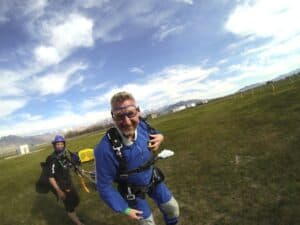 The whole experience was great. Both of us were grinning from ear to ear.

Jo showed me how to steer the chute and we made great swirling loops as we went down. Then, as we swept in for the landing, I lifted my legs so she could make contact with the ground first. We touched down, I put my feet on terra-firma, and it was done.

Belle actually stuck her landing, landing on her feet like a pro. I was so proud of her. The whole experience was great. Both of us were grinning from ear to ear. It was certainly worth the wait.

All told, eight minutes of skydiving had taken seven hours. Had we been more nervous we would’ve been climbing the walls. But we were patient and determined. Fortunately, I didn’t have anything else on the schedule so it was just a matter of hanging in there, and we were glad we did. 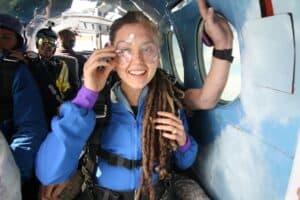 Skydiving is something everyone should experience at least once.

Skydiving is something everyone should experience at least once. Whether or not I will do it again remains an open question. But for the moment I’m satisfied to have shared the experience with my daughter.

Like the girl who missed her marriage proposal because she was falling out of the sky said, “It was awesome!” Later, after she learned she was being proposed to, she was on cloud nine.
Lucky her. She got to be on cloud nine twice that day. 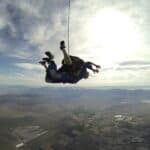 Image and video credits:
All images and video footage by Malcolm Logan and Skydive Utah