Surrendering to the Void: Stargazing at Kitt Peak Observatory in Arizona 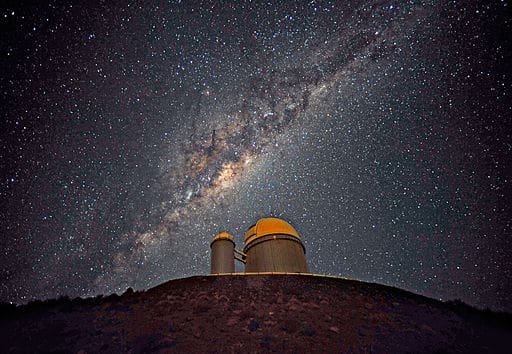 On Friday, February 15th a huge asteroid came close to colliding with the earth. The news was drowned out by the stunning revelation that Justin Bieber had stormed out of his birthday party.

Here’s what I learned from the media on February 18th: Justin Bieber is acting strangely. He wore a gas mask in public for no apparent reason and stormed out of his own birthday party.

Here’s what I learned at Kitt Peak Observatory on Saturday: Early in the afternoon of Friday, Feb 15th an asteroid measuring some 150 feet came within 17,500 miles of colliding with earth. According to NASA, this was the closest ever documented encounter with an asteroid so large. Had it hit, it would’ve impacted the planet with the equivalent of a hundred atomic bombs.

Good to know the media is doing its job.

Unlike the media, the astronomers at Kitt Peak Observatory are keenly interested in asteroids. They know that the odds that any one of us will be killed by an asteroid are roughly equivalent to those that any one us will be killed in an airline crash. They are studying the sky through high-powered telescopes 8,000 feet up on the summit of Kitt Peak. Justin Bieber means nothing to them. 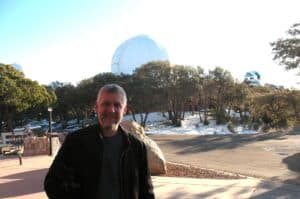 The Nighttime Observing Program at Kitt Peak allows average folks like me to spend an evening gazing at the stars.

Remarkably, Kitt Peak can be visited by anyone with an interest in astronomy. The Nightly Observing Program at Kitt Peak allows average folks like me to spend an evening gazing at the stars from the dome of an observatory with a trained astronomer.

I drove up to Kitt Peak through a series of winding switchbacks and arrived at the mountaintop mid-afternoon to take advantage of the orientation lecture and walking tour of the site. 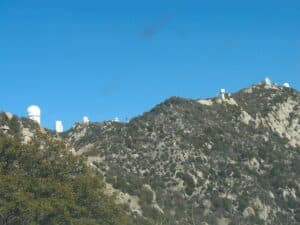 Twenty-seven separate domes and telescopes are scattered across the top of Kitt Peak, Arizona.

Kitt Peak is the largest collection of astronomical observatories in the world. Twenty-seven separate domes and telescopes are scattered across the mountaintop, each one owned and operated by a major American university like Harvard, Princeton, and MIT.

From here the nation’s foremost astronomers strive to unlock the mysteries of the cosmos. In addition to the rather urgent need to track and avert potential asteroid strikes, they want to know if life exists on other planets, where the galaxies came from, and, most intriguingly, what the heck “dark matter” is.  They spend each night surrendering to the void. 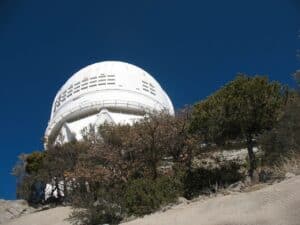 The 4 meter Mayal telescope was the second most powerful telescope in the world in the 1990s. Soon it will be obsolete.

After the orientation lecture, our tour group was led up the road to the giant 4 meter Mayall Telescope near the summit of Kitt Peak. Until 1993 this was the second largest telescope in the world. This bad boy is powerful enough to read a newspaper 30 miles away.

Standing four stories high and weighing more than a ton, this telescope played a role in the recent mind-boggling discovery that the universe is actually speeding up as it expands outward.
Physicists were sent back to the drawing board on this one because, as anyone who’s ever ridden a playground whirligig knows, objects rotate more slowly the further they get from the spinning center. So what accounts for the outer edges of the universe actually speeding up? 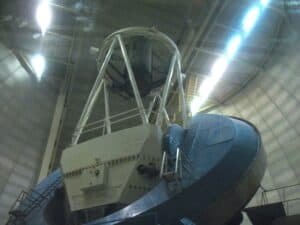 Standing four stories high and weighing more than a ton, the Mayall telescope played a role in discovering the mysterious force known as dark matter.

Peering through the Mayall telescope, astronomers detected a mysterious force in the cosmos. They can’t see it or identify any of its physical features but they know it’s there because of its affect on other objects. They have named it “dark matter”. To get to the bottom of what dark matter is, they’re going to need far more powerful telescopes, and a lot darker place to view it from.

Dark Enough for You?

Reservations for the nightly viewing program at Kitt Peak must be made months in advance. The number of people permitted on the mountain after dark is restricted. 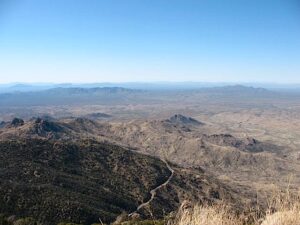 From atop Kitt Peak you can see vast stretches of the Sonoran Desert reaching all the way to Mexico.

Flashlights are strictly prohibited on Kitt Peak after dark; any kind of light hinders the astronomers’ ability to see. To walk around the grounds at night, you are given a key fob with a tiny red light to illuminate your path. When you turn it off, it’s fully dark, except for the lavish spray of stars across the desert sky, and two disturbing glows on the horizon. The big one is Tucson 60 miles to the east. The lower longer one is Phoenix, 150 miles to the north.

When Kitt Peak was established in 1958, Tucson was a dusty little cow town. Today it’s a thriving metropolis of 989,000 people, and its proximity to Kitt Peak is rapidly making the location untenable for future astronomical probing. That’s why the giant Magellan Telescope currently under construction at the University of Arizona is slated not for installation at nearby Kitt Peak but thousands of miles away in the Atacama Desert of Chile where the nights are pitch black and it’s drier than a bone. 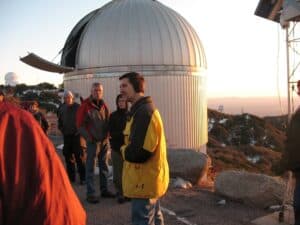 A tour group listens to a trained astronomer as the sun begins to set atop Kitt Peak.

High-powered telescopes are extremely sensitive not only to light but to heat and moisture. Humidity can distort an image seen through the lens, which is why deserts are preferred for their placement. Miniscule variations in indoor and outdoor temperatures can also spoil the view, which is why the twelve of us were shivering as our tour guide/astronomer focused on Jupiter and called us up in turn to view the distant planet and its four moons.

Pictures in the Sky

Jupiter was pretty impressive to look at, but I was blown away by the enormous vault of the star strewn sky that could be seen with the naked eye above Kitt Peak. The twinkling extravagance of the night sky cannot be seen in a major metropolitan area.  Even in remote places, it is often disguised by trees, buildings and ambient light. But here atop Kitt Peak I was seeing the night sky as it had been viewed by the ancients. 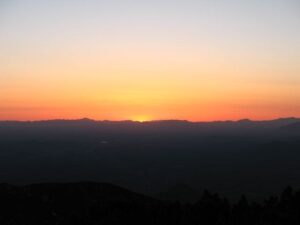 Sunset from atop Kitt Peak

Binoculars were handed out and we scanned the vista, identifying constellations. I had always thought it took a bold leap for the ancient Greeks to imagine pictures of bulls, crabs and lions in the night sky. I was okay with the big dipper – it looks enough like a sauce pan – but the other stuff? No way.

What I didn’t realize was that I was missing four-fifths of the stars that make up these connect-the-dot pictures. Standing there on Kitt Peak, I could see them for the first time and damned if I didn’t see Taurus, Leo and Cancer. The Greeks weren’t such a bunch of crackpots after all. 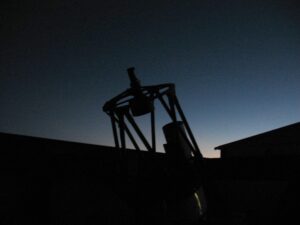 The dome to the observatory slid open and the night sky was revealed above us. In a few minutes it was fully dark.

The dusty celestial trail of the milky way was also evident, and when we went back into the observatory and peered up through the telescope, we could see the fuzzy mesh of stars that make up the distant Andromeda galaxy, one of our nearest galactic neighbors, 2.5 million light years away.

Surrendering to the Void

It gets cold at night on Kitt Peak. When night falls, temperatures plummet from the mid-50’s to the low-30’s and a steady wind picks up, making it even chillier. During the Nightly Observing Program you are outside most of the time, and even when you’re inside, the temperature remains constant because they keep the observation domes air conditioned to maintain the same temperature as the outside to avoid heat distortion. By the end of the evening, you are pretty well chilled. 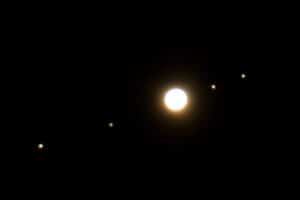 Yet, in spite of the discomfort, Kitt Peak is a rare opportunity to see some of the same phenomena astronomers see in a true scientific setting. Unfortunately, the opportunity may not be there for long.  Federal budget cuts are defunding the National Science Foundation and divesting all of the telescopes on Kitt Peak.

While they will likely find funding elsewhere, the telescopes on Kitt Peak are rapidly becoming obsolete. Newer models, under construction now, will be more than twice as powerful, but they will not be located in the United States. Chile is the go-to place for astronomy these days, so Kitt Peak will likely become a quaint astronomical curiosity, a backwater. 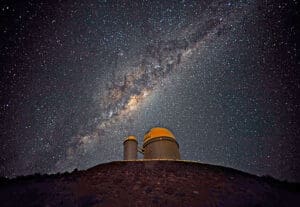 I was impressed by the star strewn sky. Here atop Kitt Peak I was seeing the night sky as it had been viewed by the ancients.

When astronomers do unlock the mystery of dark matter, they won’t do it here. If they ever discover life on other planets, some other country will get the credit. When new breakthroughs are made to find and avert asteroid strikes, it won’t be the United States that will make the claim.

But we will always be able to track and report on the carryings-on of teenage pop stars. We’re good at that. And that’s what’s important to us anyway.

It seems space isn’t the only airless void. 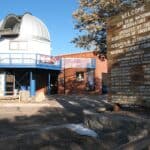