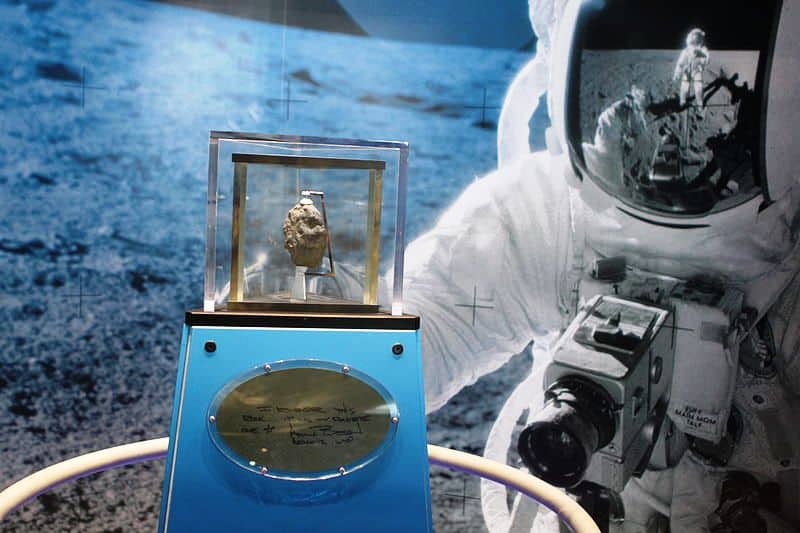 $150 billion for 50 pounds of these. Seem like a good investment?

In all of human history there may be nothing as anti-climactic as a moon rock. After spending 10 years and $150 billion, the US space program reached its summit by landing a man on the moon and bringing back 50 pounds of rocks.

Today those rocks are valued at $100,000 per ounce, which makes the total haul worth about $78 million bucks, or about $149 billion less than the cost of collecting them. By any financial measure that’s a huge loss, a colossal waste of money, and judging by the ho-hum attitude shown by most visitors to the moon rock on display at the US Space and Rocket Center in Huntsville, Alabama, a complete dud when it comes to sensational artifacts.

The impressive collection of rockets in Rocket Park at the US Space and Rocket Center in Huntsville, AL.

But can we really quantify the US space program in this way?  Should we?

Other exhibits at the US Space and Rocket Center attract more interest: the Apollo 16 capsule, the habitat complex used in the space station, and an impressive collection of missiles and rockets arranged like a stand of fir trees in an outdoor area called Rocket Park.

Even though the Center lacks an exhibit showcasing the many valuable products directly traceable to the space program, including Velcro, water filters, cordless tools, WD-40, scratch-resistant lenses, the integrated circuit, and GPS, it does do a good job of highlighting another arguably larger benefit, the value to the nation of dreaming big, of reaching together for a common goal, of pulling together with spirit and enthusiasm to achieve something notable.

Former Nazi rocket scientists on a bus to Ft. Bliss, Texas where they would teach our military the secret of building rockets.

Today the idea of pulling together as a nation is laughable, but at the conclusion of World War II it was all the rage.  We had just built the world’s most powerful military and defeating a determined enemy who at the outset was more advanced than us in every way, particularly technologically.

As Germany sat smoldering in ruins in the summer of 1945 our enlightened leaders (no, I am not using the term ironically this time) moved quickly to secure those German scientists responsible for the Nazi’s fledgling rocket program, keeping them out of the hands of the Soviets. The scientists were spirited away to Fort Bliss, Texas where they were set to work training US military personnel in the intricacies of rocket building.

Kennedy’s audacious claim that we would put a man on the moon within a decade was embraced by most Americans in 1961.

By 1950 the German team had been moved to Huntsville, Alabama where they were set to work building the first nuclear ballistic missiles when, in the autumn of 1957 the Soviet Union leap-frogged the United States by launching Sputnik, the first artificial satellite, into orbit.

The threat of this unforeseen Soviet advancement during the height of the Cold War is hard to overstate. The ensuing hand-wringing led to the establishment of NASA, and the German scientists, along with their American counterparts, got to work building Saturn rockets to carry heavy payloads into space. So encouraged was the government by the early work of NASA that in May of 1961 President John F. Kennedy declared the national goal of “landing a man on the Moon and returning him safely to the Earth” within the decade.

A Saturn V rocket suspended above the floor of the exhibit hall at the Space and Rocket Center.

It is a measure of the tenor of the times, the lack of cynicism and trust in leadership, that as far-fetched as this goal seemed, most Americans embraced it.

It is also worth noting that in 1961 the federal tax rate for top wage earners was 91%, and the capital gains tax was 25%. So we had the money. But most remarkable of all, Americans trusted their government to spend it wisely.

We had faith in our government, supported them with our taxes and achieved something extraordinary.

Out of This World

Today, as you look at the Saturn V rocket suspended above the floor of the 68,000 square foot exhibit hall built to house it, you are struck not only by its enormity (363 feet long, 33 feet in diameter) but by its simplicity. The computers used in the Saturn V fall short of those employed in your average handheld calculator. The tangle of hoses and pipes used to furnish a million and a half pounds of thrust looks like a complicated version of a V-8 engine.

My tour guide Dean stands before the archaic looking F-1 rocket engine. This baby furnished a million and a half pounds of thrust.

The US Space and Rocket Center sits on the grounds of the Redstone Arsenal where the first American rockets were built. Home to more than 1,500 exhibits and artifacts, it is the largest space museum in the world. In addition to static exhibits like the Lockheed A-12 “Blackbird” spy plane, a fragment of Skylab, and the Space Shuttle Pathfinder, it has cool interactive exhibits.

You can try your hand at steering a rocket through space in a flight simulator, or participate in a countdown and launch at a mission control mock up. You can feel the rumble of a lift-off in a blast simulator, or go rumbling across the surface of the red planet on a “Mission to Mars”.

Dean and four young girls stand inside the blast off simulator and experience the rumble and roar of lift off.

A couple of rides and simulators have come full circle.  Having been developed by NASA as a lift-off simulator, the Space Shot ride is now an amusement park staple, jetting you off the ground and shooting you up a column, before letting you down gently.  The G-Force simulator is a variation on a standard centrifugal force ride, spinning you around the inside of a barrel until you are pinned against the walls.

For a low admission price the US Space and Rocket Center is an outstanding value. You will need at least 4 hours to take it all in, and you will probably come away awestruck, if not by the marvel of what NASA accomplished back in the 1960’s, then by the sheer audacity of our nation, the American nation, investing so heavily in something that did not yield short-term quarterly results suitable to appease a bunch of shareholders.

This was a program that by Wall Street standards could only be deemed a loser, a program whose ultimate value was unclear at the time, and remains a matter of dispute today.

A couple of visitors try their hand at steering a Saturn rocket through space.

The Future of NASA

This is what has changed. We as a nation are no longer willing to make this kind of investment. Across the board funding cuts have made it hard to raise the funding necessary to achieve anything of lasting merit, and the burden has shifted to the private sector and to collaborative efforts with other nations like China and Russia. But before we lament what’s been lost, let’s ask the question: Exactly how did the space program really profit us?

One Small Step, One Giant Leap

Two astronauts repair the Hubble telescope in the film Hubble, shown at the IMAX theatre at the US Space and Rocket Center.

Perhaps something of its value can be understood when you take in the 3-D IMAX film Hubble, which was showing at the US Space and Rocket Center when I was there.  The film chronicles the 1993 manned mission to repair a bent mirror on the deep space telescope, a mission that cost more than $1 billion.

Since then Hubble has been sending back crystal clear images of far off galaxies, helping provide solutions to vexing problems in astronomy and giving rise to new discoveries, such as the fact that the expansion of the universe is accelerating, a discovery that has gotten physicists scratching their heads.

New advancements in physics could lead to breakthroughs in energy development and shift our paradigms in ways we haven’t even imagined. Without a doubt, space exploration still has the potential to rattle our world.

Already a thing of the past, the Space Shuttle could be our last ambitious foray into space.

But further servicing missions to Hubble are not scheduled. Without regular service, the Hubble telescope will gradually decay and drift off into space. No direct successor is ready for launch.

The MBA’s who pull the puppet strings of congress will tell you the whole enterprise has been a colossal waste, that a $150 billion investment in $78 million dollars worth of moon rocks is just stupid. They will point out that savvy shareholders could never purchase a second home with an investment in that kind of enterprise. So why would anyone do it?

What’s it worth to discover another planet as hospitable as our own?

As I was driving away from the US Space and Rocket Center, a news report came on the radio. The Keppler Space Telescope had just discovered the first planet outside of our solar system that orbits within the habitable zone of a Sun-like star. This planet could potentially sustain life, an astonishing discovery. But there’s a caveat. It’s 600 light years away, well beyond the investment horizon of most MBA’s.

For that reason, don’t expect Americans to make much of the new planet in the coming decades. These days we only want to invest in small steps that earn big profits for a handful of wealthy people. Any further giant leaps forward for mankind will have to wait for a more enlightened era, like the one we just left behind.

US Space and Rocket Center

The Dark Camps of War: Revisiting the Horrors...

To Steal the Labor of Others: The Bitter...

$20 is a flat out bargain for this place!