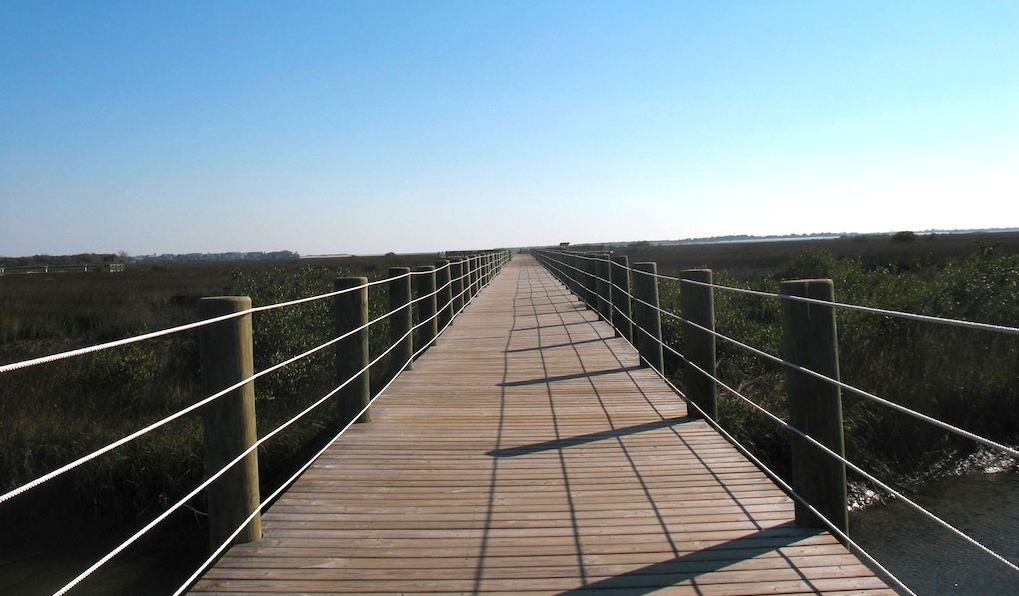 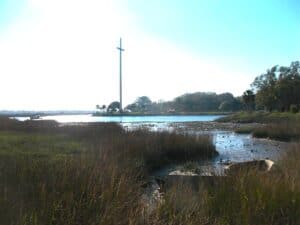 The estuary at St. Augustine where Ponce de Leon came ashore in 1513, allegedly searching for a fountain of youth.

As I came into Florida, home of the largest concentration of senior citizens in the United States, on my way to the oldest city in the United States, I was feeling a little creaky in my limbs.  I had stayed up too late watching the game, and it had been a long drive and I was feeling sort of… well – old.
But I was heading to the right place, the Fountain of Youth Archeological Park in St. Augustine, FL, where a sip from the legendary spring promised to revive me, if not wipe years from my physical age and make me as sprightly as a 17-year old.  Such are promises. 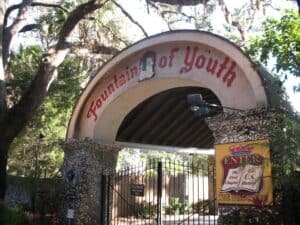 The Fountain of Youth Archeological Park is a quaint, somewhat dated tourist attraction tucked away on a residential street in St. Augustine.

The Fountain of Youth Archeological Park is a quaint, somewhat dated tourist attraction tucked away in a residential neighborhood about a mile north of of St. Augustine’s old town.  Its out-of-the-way location has been compelled by the fact that this is the actual spot where Spanish explorer Ponce de Leon came ashore in 1513, allegedly in search of the Fountain of Youth.
Ponce never found what he was looking for, but he must not’ve been looking very hard, because the proprietors of the park had no trouble locating it, about 150 yards from where Ponce stepped ashore and just inside the main entrance to the park. 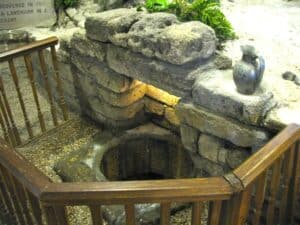 The legendary fountain amounts to little more than a hole in the ground. You can drink from it, but you won’t feel an extra spring in your step.

The legendary fountain amounts to little more than a hole in the ground surrounded by life-sized dioramas of Spanish conquistadors and noble Indians.  You may drink from it using a plastic cup provided.  The water tastes brassy and has absolutely no affect on your feeling of vitality. It does not add a spring to your step.
In spite of this shattering disillusionment, I had to smile at the notion of a fountain of youth in Florida.
There’s a certain irresistible irony behind the idea that the state with the highest population of senior citizens in the United States was discovered by an explorer searching for a fountain of youth. 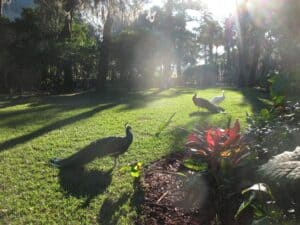 The Fountain of Youth Park has other attractions, including these peacocks that roam the grounds refusing to display their feathers no matter how you try to coax them.

Ponce de Leon reportedly came here in 1513 for the very same reason millions of others have come after him, to look for eternal youth; and while the explorer came up empty-handed (this basin with foul tasting water wasn’t here then) his followers have been far luckier.
The truth is that many Floridians have discovered a fountain of youth.  They just got to it by an entirely different route than the one projected by Ponce and his fellow explorers.

Today, one in every seven Americans is a health club member. The fastest growing segment is those 55 and older.

Today, one in every seven Americans is a health club member, and their numbers are growing.  Health club membership is up nearly 11% within the last four years in spite of the crimp put on discretionary spending by a prolonged recession.  The fastest growing segment of health club membership is those 55 and older.
Enter any health club in Florida and you’ll be surprised at the number of elderly people working out there.  “Elderly” is not the right word, however, because it connotes frailty, and these geriatric gym rats are anything but frail. 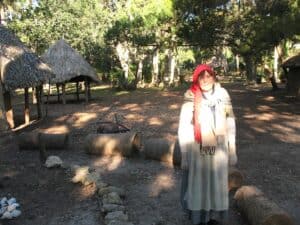 A historical re-enactor dressed as a Timucua Indian. She told me that the Timucuas had a life expectancy into their 80’s before the Spanish showed up.

Scissoring away on elliptical machines or spotting each other on free weights, these pumped up fogies are as buff as many people half their ages.  Heck, my 76-year old mother, a resident of Florida, who works out three days a week, on hearing that I was busting my butt pushing watts in a spin class casually mentioned that she had taken a break from spinning because the saddle hurt her rump.  These are not your grandparents’ grandparents.

A Mean Down Dog

But exercise is only one piece of the fountain of youth puzzle. According to a survey in Consumer Reports, 37% of Americans describe their diet as “extremely” or “very healthy”.  And while more than half of all Americans are overweight, awareness of what constitutes proper diet and nutrition is way up over what it was a generation ago. When you consider that the dangers of trans fats weren’t even confirmed and publicized until the early 1990’s (when my mother was already 58 years old), you can see the advantage the next generation will have in starting out with the right information. 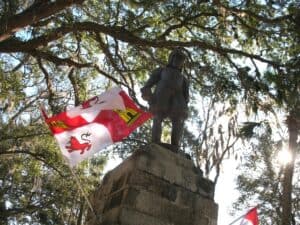 A statue of Ponce de Leon. Later writers claimed he was searching for the Fountain of Youth, but Ponce himself never mentioned it in his writings.

Knowledge is power, and in this case knowledge is longevity.  When my mother was 23-years old, 66% of Americans were smokers.  Today, when my daughter is 23, the number is 19.8%.  In 1960 the word “yoga” was meaningless to my mother (she had never heard of it).  Today, my daughter is a yoga instructor and my mother can whip off a mean “downward dog”.
Meditation, psychotherapy, massage, and martial arts were considered weird or exotic in the early 1960’s and disdained by most Americans.  Now they are practiced regularly.  In spite of the usual media alarmism, Americans are healthier today than they’ve ever been, and that’s having an affect not only on the length of life but the quality of it.  Quite literally, old people are getting younger. 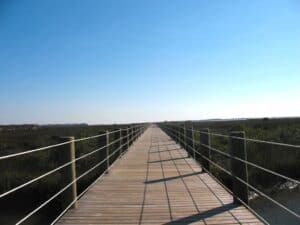 A wooden pier leads far out into the estuary at St. Augustine. You may live longer than you think.

How Long Will You Live?

Life expectancy in the state of Florida is now 79.70 years, ranked number 14 in the nation, a good showing considering that Florida is ranked number one for the number of senior citizens (aged 65 and older) at 17.3% of the population.
But there’s a secret hidden inside these numbers.  Life expectancy in the US correlates strongly to education level.  Recent studies have shown that life spans for the least educated Americans are actually contracting.  For example, the life span for a white man without a high school diploma is now 67.5 years.  Bad news, yes.  But these unfortunate people are included in the data for the average life expectancy of the rest.  So when you remove them from the equation, the average for the remainder actually goes up.  For example, college educated men in the US have an average life expectancy of more than 80 years.  College educated women live an average of 84 years. 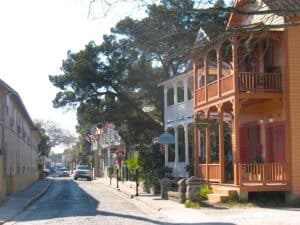 The cobblestone streets of old St. Augustine. This is the oldest continuously occupied European settlement in the US, the place where North America was discovered.

Not only is lifespan increasing, but “active” lifespan is increasing as well.  Today’s seniors are healthier, yes, but they are also more engaged in life, doing new things, experimenting, if not pushing the envelope, at least giving it a good nudging.
No longer content to sit aboard an air-conditioned bus watching the world slip by, today’s seniors like to get out.  The fastest growing segments of the travel industry are adventure travel and cultural tourism.  Seniors are volunteering.  They’re contributing time and energy.  They’re taking on new challenges.  The days of sitting in front of the TV drifting off to sleep are still years away for many 75-year olds.
All this communal activity has health benefits as well.  Studies have long shown a correlation between social engagement and longevity.  In short, the longer people stay engaged, the longer they live.  Combine that with good nutrition and regular exercise, and ongoing increases in life expectancy can be anticipated. 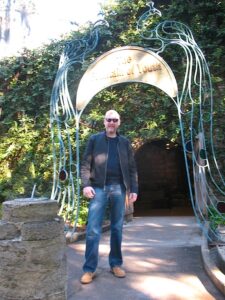 Looking forward, my life expectancy is 85 years. Here I am in front of The Fountain of Youth, but it will figure not at all in my longevity.

Looking forward, projected life expectancy for a 54-year old American male (myself) is 85 years old.  For my 45-year old wife it’s 87.  And for my 23-year old daughter it’s 91.  If this trend continues, average Americans could live well into their 100’s.  This is, indeed, a fountain of youth.

In 1512 when Ponce de Leon landed in Florida, establishing the first European settlement in what would eventually become the United States, life expectancy at birth was roughly 30 years old.  If you made it to your 21st birthday, your life expectancy ramped all the way up to 50, roughly half of what my daughter’s life expectancy is.
One can only speculate what old Ponce would’ve given for that sort of longevity.  The idea that he would’ve remained physically active and socially engaged into his 80’s would certainly have set his head to spinning.  The promise of such a thing might even have sent him on a wild goose chase looking for a legendary spring promising the elixir of eternal youth, a journey that would’ve fetched him up against the shore of what would one day become the state of Florida, home to the nation’s largest concentration of senior citizens, a cruel irony if it weren’t for the fact that these senior citizens have recently discovered the true source of the fountain of youth: diet, exercise, education and social engagement. And this water tastes sweet. 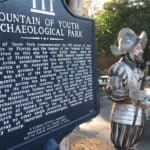 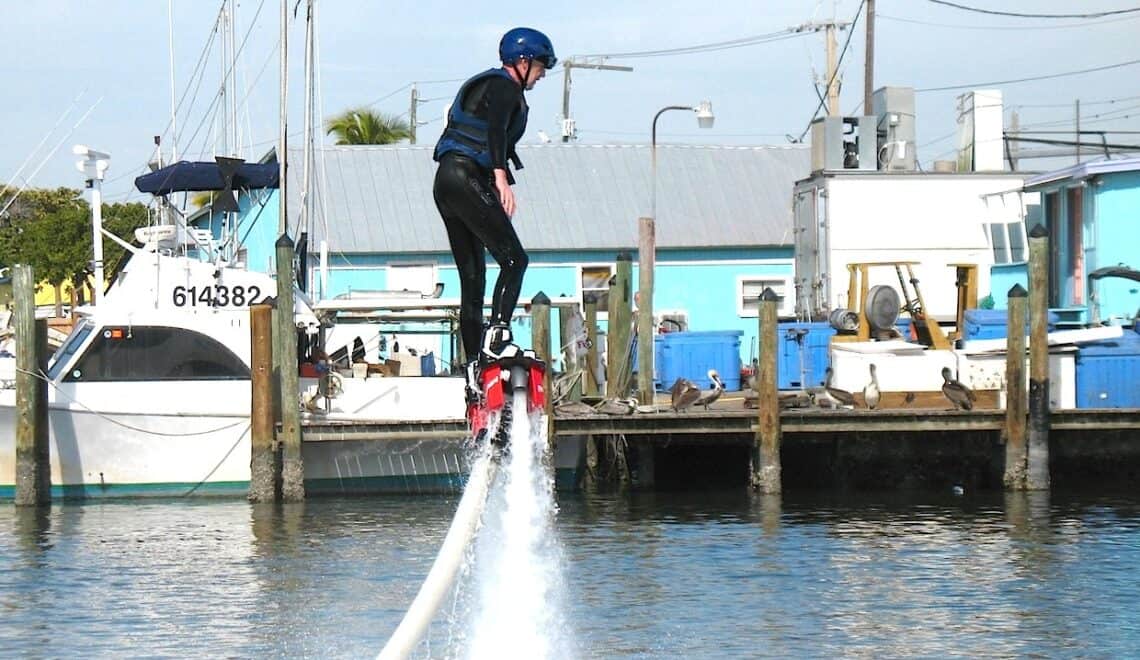