Away Again in Margaritaville: A Perfect Winter’s Day in Key West, FL 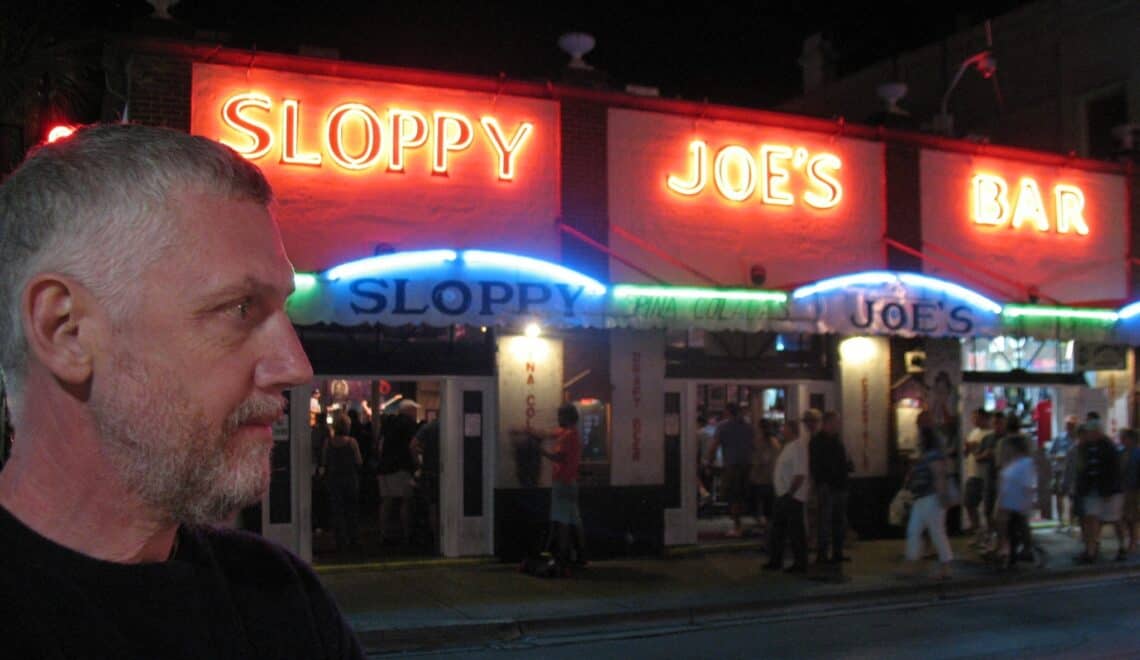 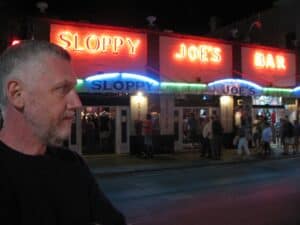 Lincoln rebelled at the idea of getting wet. “My blood has become too thin living in Miami,” he declared.

But by the time we got to the place on a tranquil channel beside a mangrove swamp in Key West the temperature had climbed to 74 and the sun was shining brightly.

When Margot, our guide, explained that the vast majority of first time paddlers made it through the entire 90 minutes without falling off, Lincoln’s confidence was restored. So we slid out on the surface of the water, teetering a bit at first, down on all fours, gathering the nerve to stand up. A brief frightening moment, our boards quavering as we got to our feet, and then we were standing up, brandishing our long paddles, looking for all the world like we had done this before. 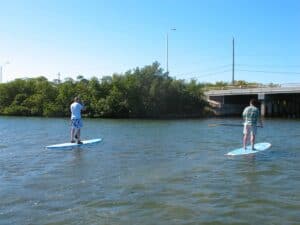 Paddleboarding was not nearly as daunting as Lincoln and I had feared. Neither one of us fell off.

Margot pointed out the aquaculture as we slid past, crabs and starfish and sponges, the water as clear as glass, never more than five feet deep. We followed the channel to an open bay and then through it to a narrower channel bordered by mangroves.

Margot told us that once upon a time developers had hungered to rip out the mangroves and build more residential homes in this area. But before they could act, the importance of mangroves in absorbing storm energy was learned. Areas where the mangroves had been removed had become sitting ducks for hurricanes. Millions in home values had been lost. 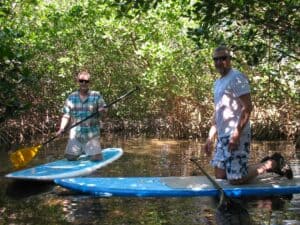 We had to crouch down to pass under mangrove branches. The shallow, meandering passage led into a sun-dappled maze of twisted limbs.

The last hurricane to blast Key West was in 2005. It was virtually forgotten in the media frenzy surrounding Katrina, which had occurred just six weeks earlier. The mangroves here had kept the vulnerable homes of local celebrities like Jimmy Buffet, whose former backyard we paddled past, from being reduced to kindling.

Margot guided us into a tangled jungle of low hanging vegetation. We had to crouch down to pass under the branches. We pulled ourselves along by the roots. The shallow, meandering passage led to a sun-dappled clearing replete with sea life: jellyfish, sea worms, barnacles and crustaceans. 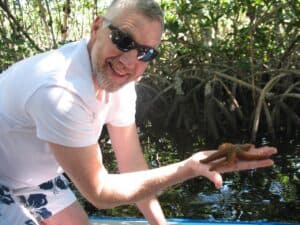 Starfish anyone? The mangrove forests of Key West are rich with aquatic life.

From the clearing a dozen similar passages led off in all directions. Without Margot we would have become lost, wandering in the mangrove forest for hours, adrift on our paddleboards, dramatically increasing the probability that one of us would sooner or later fall off. But as it was, Margot led us back to the main channel and we made it to the dock without mishap. Lincoln had to confess that it had been a worthwhile adventure.

Now we were off to a food truck located on the edge of a parking lot near the waterfront. This upscale lunch wagon had somehow nabbed the number one spot on Trip Advisor for restaurants in Key West. 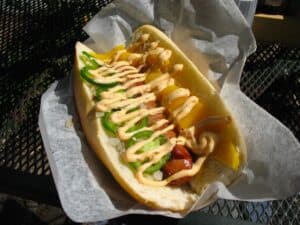 Garbo’s Grill specializes in fish tacos and seafood burritos, made fresh while you wait. Chickens and roosters peck around your feet as you nosh in the palm-shaded lot beside it. We opted for the mango jalapeno hot dog, an artful combination of sweet, savory and spicy, and found it quite tasty.

Lincoln was beginning to warm to the idea of a quick day trip to Key West. Reluctant at first, he needed to be persuaded to unplug himself from the rituals of daily life to steal away down the overseas highway to Margaritaville, as different from the multi-cultural madness of Miami as Barbadoes is from New York, but only three hours south. 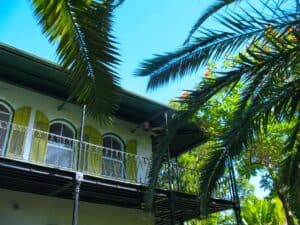 The French Creole manse that is Hemingway’s house in Key West. The island has been home to a variety of color figures from Tennessee Williams to Jimmy Buffet.

In recent years many of my friends have faced difficult challenges. To get away is always refreshing. Some places are better than others for reviving the spirit. New Orleans, Costa Rica, and Santa Fe are among my favorites, but to these I might add another: Key West.

I long ago gave up on the idea of Florida as some sort of carefree haven from the troubles of life. Few places are more stressful. Orlando is overrun with screaming children and nerve-racked parents. The southwest coast is like a congested parking lot at an upscale shopping mall. And the Miami-Ft. Lauderdale corridor is quite possibly the most overcrowded, noisy and uncomfortable urban corridor in America. But Key West is different.

If you hit it mid-week when the tourist influx is at low tide, you can still enjoy some of the unique flavor of this low key tropical gem, a haven for sports fishermen, bird watchers and colorful characters of all sorts. 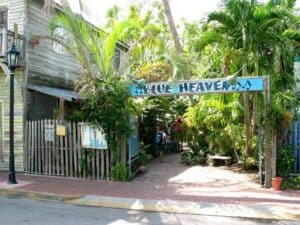 After lunch we headed over to the Ernest Hemingway House, the French-Creole manse that Ernest Hemingway called home during the years 1931 to 1939 when he wrote “The Snows of Kilimanjaro” and “For Whom the Bell Tolls”.  The guided tours shed light on the colorful figure of Papa Hemingway whose love of deep sea fishing, lazing about on porch swings, and heavy drinking became the template on which Key West was built.

Next we were off to Blue Heaven for a slice of key lime pie.  I wondered whether Hemingway had ever indulged in one of these when he refereed boxing matches here back in the 30’s. A frothy mound of meringue sits atop a creamy wedge of lime filling on a graham cracker crust, a sugary medley of texture and flavors best enjoyed beneath the branches of the century old oaks that surround the patio at Blue Heaven. 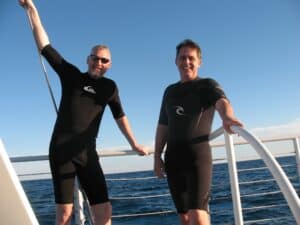 We traveled 45 minutes out into the Gulf aboard a 100 foot catamaran where we donned wets suits to explore a teeming coral reef.

What Vacationing is All About

Key West emanates a Creole charm not unlike the French Quarter of New Orleans and is similarly chock-a-block with open-air bars and restaurants.  Tourists gather here from all over the country eager to emulate the amiable dissipation chronicled by Jimmy Buffet in his mega-hit Margaritaville.

But drinking in Key West also carries a nautical component and cannot be complete without a rousing sea adventure to brag about, so Lincoln and I booked an excursion aboard Fury Catamaran.

Their Rum and Reggae Tour carried us 45 minutes out into the Gulf aboard a 100 foot catamaran where we donned wets suits to snorkel a shallow coral reef. Tropical fish darted before us and a massive sea turtle paid us a visit before we climbed back aboard and kicked back with a rum punch to watch the sun set to the strains of Bob Marley and the Wailers.

We were damp, so the trip back was a little chilly, but Lincoln was not complaining. The same guy who just a day earlier had expressed reluctance to become wet was now standing on the bow of a vessel making  30 knots, the wind blowing through his hair, as the sun dipped below the horizon and the temperature dropped 15 degrees. He had forgotten his worries for a while, which is what vacationing is all about. No matter how long he had been a resident of Miami, his blood was not too thin for this. 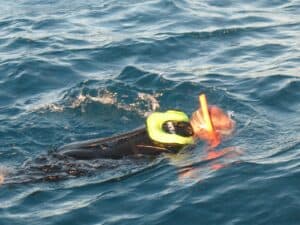 We snorkeled the reef and were visited by a massive sea turtle and lots of tropical fish.

Back on Duval Street we bellied up to the bar at Sloppy Joes. Hemingway put this place on the map, sitting elbow to elbow with his Cuban sidekick and an assortment of grizzled fishermen and boozehounds in the days before Castro took over just 50 miles south of here.

Key West’s proximity to Cuba has impacted its culture in several ways, most recently during the Mariel boatlift in 1980 when federal authorities used heavy-handed methods searching for Cuban exiles in hiding. So put off were the residents of Key West at being treated like criminals that they decided to secede from the U.S. 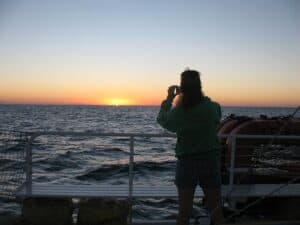 Sunset aboard Fury Catamarans’ Rum and Reggae Tour. We were able to forget about our cares for awhile.

Although the establishment of Key West as a separate republic was mostly tongue-in-cheek, the residents still celebrate Key West Independence Day on April 23rd each year when the residents turn out for raucous street parties, fireworks and unique events like the “drag races” in which the town’s flamboyant drag queens race down Duval Street in feather boas and stiletto heels to the cheers and laughter of the crowd.

We wound up our evening at Captain Tony’s Saloon. As it turns out, this was the actual place where Hemingway hung out before the bar owner took the name and moved it into more spacious digs down the street. Now both places claim a Hemingway connection, which is important in a town where emulating the boozy habits of its celebrity residents is a key tourist pastime. 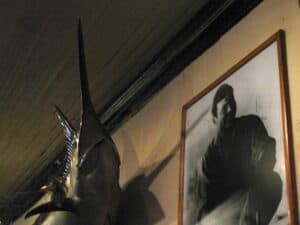 A portrait of Hemingway next to a mounted swordfish on the wall at Sloppy Joes. Key West was a great mid-week getaway.

We ran into a couple from Nebraska who had been aboard the catamaran with us. We shared a Red Stripe and swapped stories about our nautical adventures; and then, winding up a day of paddleboarding, snorkeling, eating, imbibing and exploring, we said goodbye to Key West and headed back to Miami.

Key West holds a unique place in our American pageant. Part Creole, part American, part island, part mainland, its laidback atmosphere is best appreciated mid-week when the crowds are manageable and the overseas highway is not clogged with traffic.

Lincoln had to admit this was something he didn’t do more often simply because on previous trips he had tried to come down on the weekend. Having enjoyed a day’s respite with a casual mid-week drive, he vowed to do it again.

He was no longer concerned about getting wet. 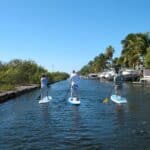 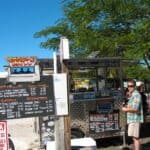 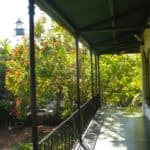 The Ernest Hemingway Home and Museum 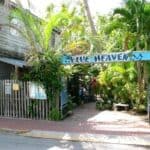 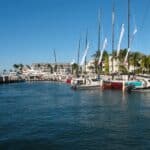