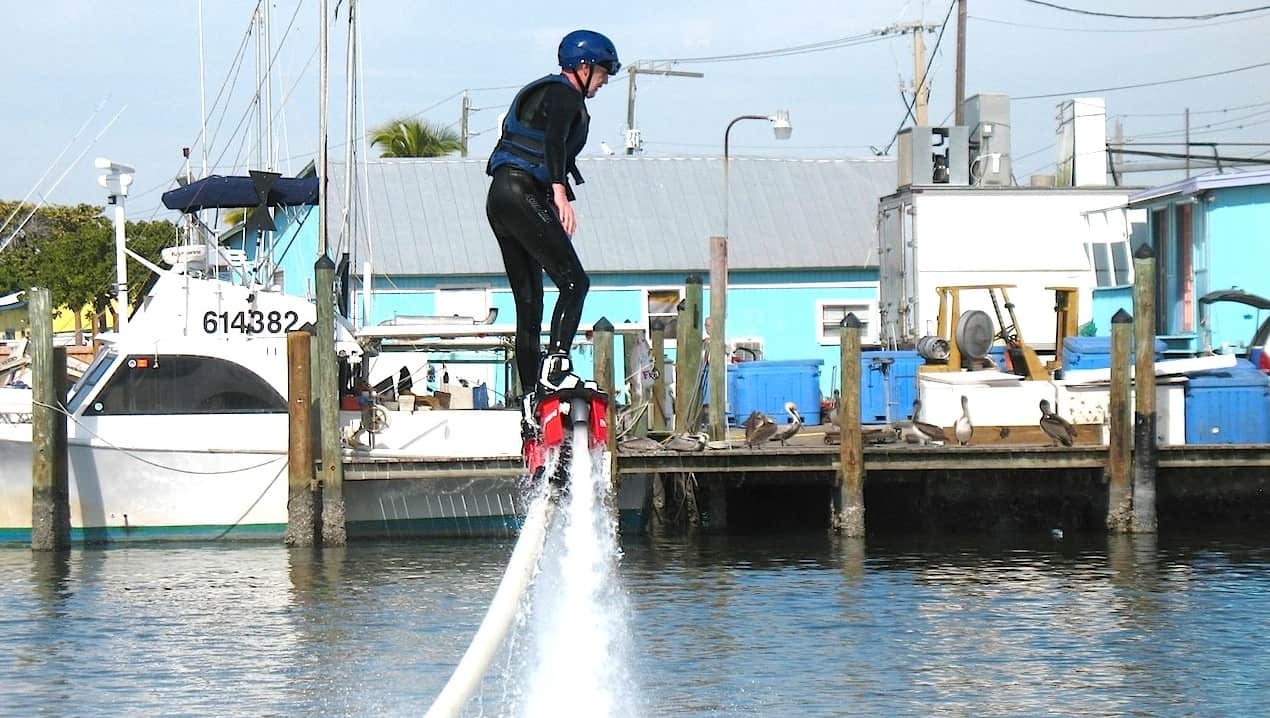 Flyboarding is harder to describe than it is to actually do. Check out this video to see what I was able to accomplish in a 30 min. lesson.

When I was eight, I was told that this would be my future. I was all for it!

When I was eight, I saw a vision of my future.  According to Argosy magazine, by the time I was thirty I would be getting around with a jet pack. I would be rocketing off to work with 500 pounds of thrust on my back. At night I would be heading home with my feet dangling a hundred feet above the ground. Cars and buses would be obsolete because no one would roll anywhere if they could fly. The skies would be filled with happy helmeted rocketeers. Let me tell you, this was a future an 8-year-old boy could get behind.

Other futuristic visionaries endorsed this view.  Johnny Quest could go anywhere with his rocket belt. Characters on the Jetsons and Lost in Space routinely traveled by jet pack, and James Bond took flight in Thunderball. It was going to be an altogether exhilarating future and I couldn’t wait.

Alas, the jet pack went the way of the flying car and colonies on the moon. About the time I was supposed to by flying off to work I was standing at a service station with a gas pump in my hand watching the digital readout gobble up my paycheck. I had been brought back down to earth.

With Flyboarding you can levitate above the water like something mythical rising from the deep.

Rising From the Deep

Still, the 8-year-old in me lives and longed to be satisfied, so about a year ago, when I heard of a new sport called Flyboarding, a sport that sounds suspiciously like jet packing, except that it involves hovering over water instead of the ground, I knew I had to try it.

Flyboarding involves standing on a board connected by a long hose to a Jet Ski or similar watercraft. The Jet Ski provides propulsion. The flyer straps into a pair of sturdy boots fastened to the surface of the board and, when the propulsion is delivered beneath his feet, he can levitate like something mythical rising from the deep.

The whole idea is so whacked out it seems like something only an expert would dare, someone with an overactive imagination and a whole lot of time on his hands. As it turns out, however, Flyboarding is not hard. Most people can master the basics in a 30-minute lesson and be hovering above the water in no time, seeing the world from a rocket man’s point of view.

You must forget everything you’ve learned about how not to fall over. Flyboarding will not tolerate the shifting of weight to compensate for imbalance.

The trick is to get your feet under you just right and then to forget everything you’ve learned from skiing, skating and surfing about how not to fall over. Flyboarding will not tolerate the shifting of weight to compensate for imbalance. Shifting your weight will have you sliding down off your jet propelled perch into the water.

Rather, you must stand as stiff as a statue. Any compensation to avoid tipping will come from tiny adjustments to your toes. Press down on your toes and you’ll tip forward. Lift up slightly and you’ll tip back. Find that sweet spot in the middle and you’re hovering.

You begin by lying face down on the surface of the water and putting your legs straight out behind you. The watercraft operator gooses the propulsion and you are pushed chin up through the drink like a slow moving torpedo. When you are ready, you drop your legs straight down under you, arch your back and feel the lift.

As you begin to rise, you lift your toes slightly; this compensates for the drag of the water. But as you break the surface you must press down on your toes to bring the board back even while retaining an upright posture. This is where I ran into difficulties.

Once you bend over on a Flyboard you’re done for. Your butt just keeps going back like a twerking robot stalled in reverse.

I kept lifting my toes even after I broke the surface, which threw my weight back so that I had to bend over to compensate. Once you bend over on a flyboard you’re done for. Your butt just keeps going backward like a twerking robot stalled in reverse and then your legs fly out in front of you and you slap down on both cheeks.

I had this experience again and again until Brandon, my instructor, who was manning the watercraft, saw the problem and pointed it out. I fared better after that.

When you tip forward the worst that can happen is that you slide down into the water like you’re riding an escalator down to the bottom, and which is a position you can easily recover from by lifting your toes again, leading to the rising and falling of your upright form through the water like a marionette being tugged along by an overeager puppeteer.

Because most of what’s happening physically is happening with your toes, Flyboarding is not physically demanding. The sensation is unique and rewarding in the way that balancing on a tightrope might be. And once you’ve got the equilibrium right the real fun begins.

My upright form rising and falling over the surface of the water like a marionette being tugged along by a puppeteer.

The next phase is to extend your hover time and reach for higher heights. Accomplished Flyboarders can ascend as high as 30 feet. From your apex, whatever it might be, you can dive down and be propelled beneath the surface, surging along dolphin-like before arching your back and knifing back up, shedding droplets as you regain your upright posture. All the fun promised by the jet pack – and more! Expert Flyboarders do flips, spins and other maneuvers, but the sport is in its infancy and its evolution is just beginning. What it will become in a few years is anyone’s guess.

Got it! The sensation is unique and rewarding and once you’ve got the equilibrium just right the real fun begins.

The Flyboard was invented by French Jet Ski racing champion Frank Zapata in 2011 and introduced to the public at the Jet Ski World Championship in 2012. A YouTube video demonstrating its use got 2.5 million views in just two weeks. Extreme sports enthusiasts were all over it. But labeling Flyboarding an extreme sport leaves the impression that it’s dangerous and difficult. It’s neither.

When Brandon and Jessica of FMB Flyboard anchored their boat in a small inlet off Hurricane Bay in Fort Myers, Florida I was a little concerned.  The area they proposed to teach me in was hemmed in by docks on one side, sandbars on the other, and a concrete highway bridge less than 50 yards away.

If I was going to be propelled through the water by jets this didn’t seem like nearly enough room. I envisioned being driven head first into one of the bridge pylons. But they assured me it was plenty of space and then followed up with a warning to stay within the channel marked by the buoys because the water outside of it was too shallow. I marshaled my courage an got started.

The next phase is to work on getting higher. Accomplished Flyboarders can rise as high as 30 feet above the water.

As it turns out, you really don’t need much room to Flyboard. Everything you do happens within a 40-yard footprint on the water surface. The biggest hazards are the watercraft itself and the boat you arrived in.  Steer clear of those and you are pretty much safe from injury.

As for getting tangled in the 8-inch circumference hose that follows you around like a dinosaur’s tale, the plump buoyancy of the thing prevents you from getting caught up in it. You could literally wrap yourself up in it and one twist of the throttle would set you free. Despite all outward appearances, Flyboarding is remarkably safe.

Return of the Rocket Man

For anyone who grew up in the 1960’s Flyboarding fulfills a lost childhood dream: the dream of flying with a jet pack.

Flyboarding has everything going for it. It’s safe, easy to learn and uniquely fun. Still, it’s new. As of this writing, there are not much more than a few dozen places in the United States where you can try it. You can find some of those places in Fort Myers, FL; Austin, TX; San Diego, CA; and Chicago, IL.

I predict a robust future for Flyboarding.  Not only does it have all the earmarks of a successful thrill sport, there’s a nostalgic feel about it as well. For anyone who grew up in the 1960’s it promises to fulfill a childhood dream: the dream of flying with a jet pack, a dream that was lost and has now returned in the form of Flyboarding.

Image Credits:
All images by Malcolm Logan and FMB Flyboard, except for Rocket men of the 1960’s, IHS Global Spec CR4

Sand, Sex and Style on Miami Beach, the Sexiest City in America

The Cries of the Abused: Exhuming the Horrors of the Past in Marianna, FL

Sand, Sex and Style on Miami Beach, the...

Longevity: Discovering the Real Fountain of Youth in...