Facing up to White Nose: Exploring a Cave in Stanton, MO 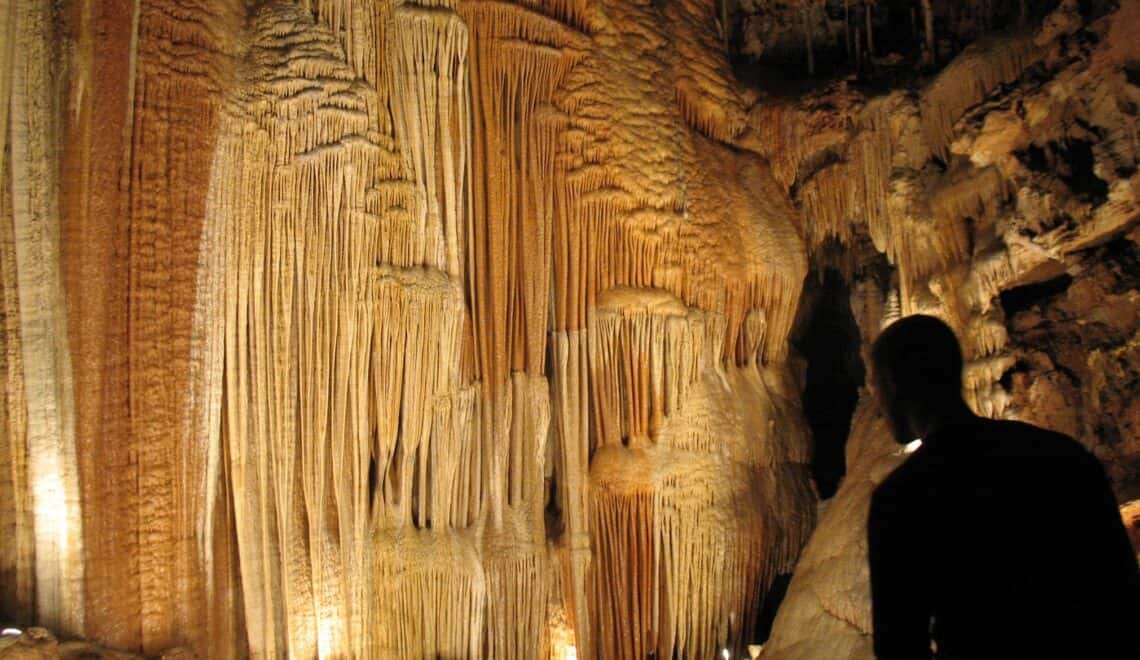 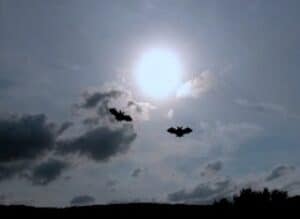 A huge cave like Meramec Caverns in Missouri is home to thousands of bats. Human impacts could threaten their survival if something isn’t done.

Caves are cool. Slipping out of a hot, muggy day into the cool environs of a cave is the pre-modern equivalent of air conditioning.  What’s more, caves are a world unto themselves, unique ecosystems akin to tropical reefs or desert floors.  So it’s no wonder human beings have always been fascinated by caves.  But cave exploration in America may become a thing of the past if proper measures aren’t taken to counter a growing threat.

I recently visited Meramec Caverns in Missouri for what may be the last time. The sprawling 4.6 mile cavern system near Stanton, Missouri is honeycombed with chambers, grottoes and cathedral-like rooms sporting an impressive array of stalactites and stalagmites, an underground river and plenty of cool rock formations. Add to that a fascinating history that features Jesse James, a fierce confederate guerilla attack on union mining operations, and a brief flirtation with TV notoriety, and the cave is definitely worth the $20 admission price, but it may not be open for much longer.

White nose disease is a fungus that appears on the nose of hibernating bats, waking them from hibernation and leading to death.

Facing up to White Nose Syndrome

Meramec Caverns, while entirely welcoming to its human visitors, may soon become an inhospitable place for bats. In April 2010, the Missouri Department of Conservation confirmed the presence of White Nose Syndrome in Missouri bats. This little understood disease is a fungal growth that appears on the nose and wings of hibernating bats, waking them from hibernation and leading to over-activity that results in starvation.

White Nose Syndrome has already decimated bat populations in the northeastern US and eastern Canada. Left unchecked it threatens to spread across the continent. Six of twelve Missouri species are susceptible to the disease, and researchers haven’t got a clue how to stop it. One thing is for sure, however; the folks who run Meramec Caverns don’t want to discuss it. 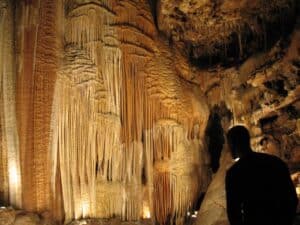 Magnificent stalagtite formations like “The Stage Curtain” are a major draw at Meramec Caverns in Missouri. The site sees thousands of visitors each year.

Between a Rock and a Hard Place

The nightmare scenario for White Nose Syndrome is a major die-off of the North American bat population. Bats occupy a critical biological niche; they eat their body weight in insects every night. Remove bats from the equation and you get an exploding insect population, resulting in major crop loss, not to mention a whole lot more swatting and itching.

But like all things related to human impacts on the environment, about half the people in this country would just as soon bury their heads in the sand. As usual, those who prosper from the status quo are in no hurry to change things. Which is why when I asked my tour guide about the possibility of White Nose Syndrome in Meramec Caverns he told me that White Nose Syndrome had not appeared west of the Mississippi. This was either a case of being ill-informed on the subject (rather a major shortcoming in someone giving a cave tour) or a blatant falsehood. 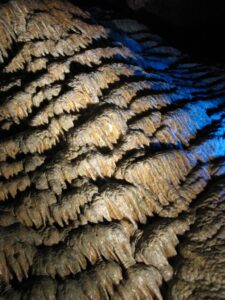 The idea that the folks who run Meramec Caverns would want to dodge the subject is not surprising. Meramec Caverns has a long history of being a “show cave” and the thought of restricting human access to it puts them between a rock and a hard place – so to speak.

Human access has long been part of the story of Meramec Caverns. As long ago as the 1890’s the cave was used by locals as a place to cool off in the summer. Its large anterior chamber, nicknamed “the ballroom”, was outfitted with a 50 ft x 50 ft dance floor and used to host community dances. In 1933 a savvy promoter named Lester Dill purchased the cave to turn it into a tourist attraction.

In the 1950s, during the post-war prosperity years as Americans took to the roads in increasing numbers, Meramec Caverns became a major attraction on old Route 66. Billboards popped up from Chicago to Amarillo beckoning tourists to Visit Meramec Caverns, and many did. What those tourists saw then is pretty much what you see now. After passing out of “the ballroom” lit with a garish neon sign and outfitted with a faux cabin meant to represent the sort of cabin Jesse James would’ve lived in, you make your way deeper into the cave where you encounter a rather hokey statue of Jesse James himself alongside his brother Frank standing guard over a treasure. 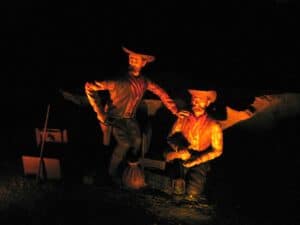 As you make your way deeper into the cave, you encounter a rather hokey statue of Jesse James and his brother standing guard over their treasure.

Meramec Caverns makes much of the Jesse James connection, highlighting the fact that James used the cave as a hideout and a place to conceal his ill-gotten gains, but the clumsy statuary and the ho-hum delivery of the guides does little to inspire historic reflection.

As you penetrate deeper into the cave, you are shown spots where the cave enjoyed brief celebrity in the 1950’s as the location for a bit on the Art Linkletter show and an episode of Lassie. But for anyone under the age of 50 these associations mean less than nothing and come off as filler meant to pad the guide’s palaver.

The cave really only becomes interesting once they stop trying to fluff it up with celebrity associations and permit it to be what it actually is, a pretty spectacular example of dripstone mineral formation resulting in roomfuls of dramatic stalactites and stalagmites. 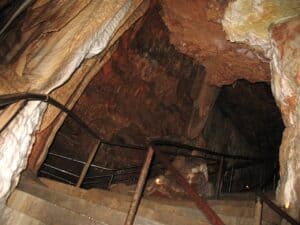 You ascend a flight of steps to a chamber in which the stalagmites have flattened and accreted, forming Seuss-like stands.

You proceed along a paved path beside an underground river and come upon the Jungle Room, a half-submerged forest of spires and columns theatrically lit. Then you ascend a flight of steps to the Wine Table, a chamber in which the stalagmites have flattened and accreted, forming Seuss-like stands.

Finally, you wind up at the Stage Curtain, an awe-inspiring cascade of stalagmites 70 feet high, an expression of natural processes occurring over thousands of years, impressive in its own right, but which the 50’s-era hucksters at Meramec Caverns couldn’t resist dressing up with a sound and light show complete with a recording of Kate Smith belting out God Bless America while your tour guide switches red, white and blue lights on and off by hand. Low rent and corny, yes, but charming in that innocence-gone-to-seed way so common along Route 66.

The question is: Is it worth killing thousands of bats? 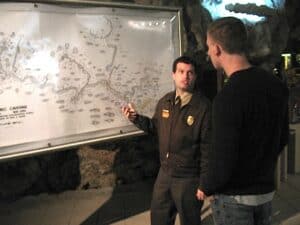 A tour guide stands before a map of the 4.6 mile cavern system. The cave is home to thousands of bats.

The Fate of the Cave State

Researchers have concluded that White Nose Syndrome, while not an airborne fungus, is transmittable by soil, which means that humans can pick it up and carry it around on their clothing. Already the Missouri Department of Conservation has closed numerous caves on public lands and is talks with the owners of Missouri’s show caverns to develop an action plan. But judging by the response I got at Meramec Caverns, the initial response had been unenthusiastic. Let’s face it, cautioning tourists about the threat of WNS could be bad for business.

Missouri is home to more than a dozen notable show caverns – the state is sometimes referred to as “the cave state” – so shutting these caves down would have a major impact on tourism. But doing nothing and handing out disinformation seems a recipe to bring them to that pass sooner rather than later. 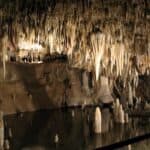 The Jungle Room in Meramec Caverns is a half-submerged forest of spires and columns.

If White Nose Syndrome is spreading as quickly as scientists fear it is, marching thousands of tourists through Missouri’s caves without any precautions whatsoever is guaranteed to accelerate the die-off.  And if the die-off reaches major proportions, the state and federal governments will have no choice but to close the caves down.
And then no one will be able to see where Jesse James hid his gold, or hear Bessie Smith singing God Bless America while the lights are switched on and off.

And that would be tragic.

Discover the History of the Caverns. Meramec Caverns. 15 June 2012.