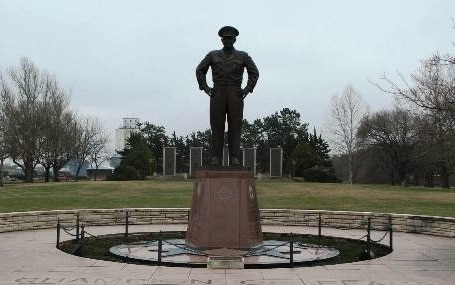 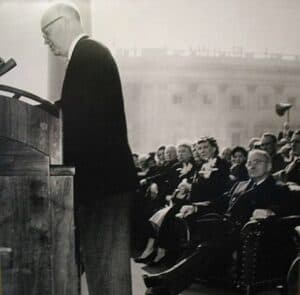 Eisenhower takes the oath of office as Truman sits looking on. These two presidents, both from the Heartland, presided over 16 of the most rewarding and challenging years in US history.

The years 1944-1960 saw the greatest expansion of the American economy we may ever know.  They saw the end of Second World War, the dawn of the nuclear age, and the beginning of the Cold War.  They were among the most challenging and rewarding years in US history, and they were navigated adroitly by two outstanding American Presidents whose homespun values and common decency were products of the Heartland, from which they hailed.
Eisenhower and Truman were men of Kansas and Missouri respectively. They were the son of farmers and small businesspeople.  They were churchgoers.  Hard work and a sense of duty lay at the root of their characters.
They were born six years apart and 180 miles down the road from each other, an impossibly long distance in the final decade of the 1800’s when they were born, but which today can be navigated in 3 hours via Interstate 70.  For the ambitious who want to get a taste of 16 years of US history in a single day, both museums can be visited in a single go if you get to Abilene, Kansas at 9am when the Eisenhower Museum opens, and hustle over to Independence, Missouri by 3pm.

The Eisenhower Presidential Library and Museum

The Eisenhower and Truman museums are 180 miles apart on I-70. You can visit both in one way if you’re ambitious.  Click map to enlarge.

The best way to attack the 22 acre campus of the Eisenhower Presidential Library and Museum is to go to the visitor center first.  There you will be presented with a 20 minute film on Ike and his times, priming you for the experience ahead.  Next, you should visit the boyhood home, which is right next door.  The home has not been moved to the museum campus, but rather the museum campus has supplanted the neighborhood that used to encompass the home.
The house itself is an astonishingly compact two story clapboard dwelling complete with original furnishings. Walking around in this cramped space you will wonder how mother and father Eisenhower managed to raise six boys all of whom went on to achieve notable success – not a black sheep among them – the greatest of whom was Dwight, their third son. 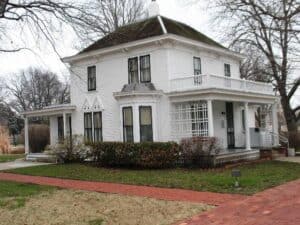 Over at the Eisenhower Museum, just beyond, you will get a sense of his achievements.  The museum itself is something of a hodge-podge.  Exhibits on wife Mamie’s gowns sit cheek and jowl with a presentation on the engineering feats of the D-Day landings.
There are some remarkable things, like a roomful of gifts from foreign dignitaries, including an ornately carved elephant tusk from Ngo Dinh Diem, received when the US was trying to prop up the unpopular dictator in Vietnam, some ho-hum things, like standard issue war armaments, and some downright weird things, like a GE stove that Ike installed in the solarium of the White House to make chili.
The museum provides little in the way of chronology, hopping from era to era, and starting out with an entirely unrelated exhibit on White House landscaping.  Rather than providing a sense of the man and his times, the museum seems intent on lionizing the figure, for which little effort is necessary. 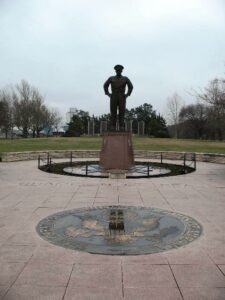 Eisenhower, by all accounts, was a decent man, firm in duty, strong in leadership, humble in manner.  From our perspective, in an age where vicious mean-spirited attacks on the president are de rigeur, it’s hard to fathom a political leader who was respected and admired even by his adversaries. But Eisenhower was that.
The Eisenhower library, facing the museum from across the campus, houses 26 million pages of historical records for use by scholars and historians.  A fitting conclusion to any visit is a stop at the chapel where Dwight and Mamie are buried.  Their tombs lie in a small rotunda beneath stained glass windows and surrounded by inscriptions reflective of the man’s character.
Two and a half hours are about perfect for a visit to the Eisenhower Museum, and then if you jump in the car and head off to Kansas City via Route I-70 across mostly flat farmland, you can arrive in Independence, MO with two and a half hours to spare for the Truman Museum.
In a way, Eisenhower both preceded and followed Truman in history.  Eisenhower was already a towering figure at the end of World War II, having been supreme allied commander, when Truman, in circumstances nearly Shakespearean in their convolutions, became vice-president to a dying FDR, and then, less than three months later, ascended to the presidency. 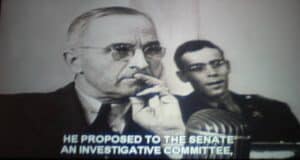 Image from a film at the Harry S. Truman Museum. Truman was an ordinary man thrust into extraordinary circumstances.

Like Eisenhower, Truman was a decent man steeped in heartland values.  Unlike Ike, he came to power in harrowing times.
From the moment Truman stepped across the threshold of the Oval Office he was confronted with grim choices.  Should he drop the A-bomb or approve a massive invasion of the Japanese homeland?  Should he disband the military at the end of the war and risk sliding back into a depression or keep pumping money into men and arms, allowing the establishment of a powerful military-industrial complex?  Should he confront the Soviets in Eastern Europe or maneuver for a stalemate that would set the groundwork for a prolonged cold war?

No matter what decisions the fledgling president made, they were bound to be controversial, and to this day Truman remains a controversial figure.  His library and museum do not skirt the issue but present a balanced view of the man, laying out the challenges and achievements of his career in clear, sequential order.
This is an elegantly designed, well-organized museum with engaging interactive displays incorporating audio, video, film clips, surveys, games, music and maps.  As you make your way through the museum you cannot help but be struck by the many fearsome challenges faced by this humble former shopkeeper.

During the time Truman was in office, Eisenhower appeared on the cover of LIFE four times. Truman did not appear once.

Truman oversaw the Berlin airlift, the foundation of NATO, and the Marshall Plan.  He signed the documents recognizing Israel.  He confronted the spread of communism in Greece and Turkey and established the policy of containment.  He ended racial segregation in the military and initiated the war in Korea.  He stood aghast as China fell to the communists and weathered the backlash at home that became known as the Red Scare.
You will come away from the Truman Museum with a sense of an ordinary man thrust into extraordinary circumstances.
For Eisenhower, who followed Truman into the White House, the circumstances were somewhat different.
By the time Eisenhower took the oath of office in 1952, most of the post World War II heavy lifting had already been done.  For the next eight years the United States enjoyed the greatest economic boom in its history, an American idyll the likes of which we will never see again.  Naturally, most of the credit went to the man sitting behind the desk at the time, with little thought given to the controversial figure who set the table for him. Ike was always a fan favorite. 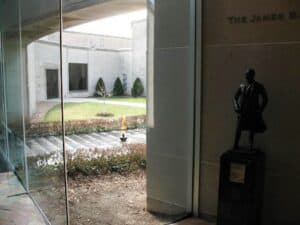 Eternal flame in the central courtyard of the Harry S. Truman Museum and Library. I paid my respects at both memorials.

One of the final rooms at the Truman Museum speaks volumes about the two men and their place in the national psyche.  It is wallpapered with Life magazine covers, one for every month that Truman was in office.  Ike appears on the cover four times.  Truman does not appear once.
My final stop was at the Truman Museum was the gravesite of Harry and Bess Truman in the circular courtyard in the center of the complex.  As I did at the Eisenhower Chapel, I paid my respects to the former president and thanked him for his wise and courageous service.
As they were closing the doors and shutting off the lights at the Truman Museum, I walked out with a renewed appreciation of how the nation and the world had benefited under the auspices of these two humble men with their heartland values, and what a debt of gratitude we owe them for piloting us through such challenging times.
I had traversed sixteen years and 180 miles in one day, and it was well worth the effort.