The Tyrant's Art: Living in a Dream House in Two Rivers, WI

Frank Lloyd Wright’s “Still Bend”, also known as The Bernard Schwartz House, is available for vacation rentals. Staying there is like living inside a painting.

Living in his house, it was hard to comprehend how such a cold, self-absorbed person could create a thing of such lasting beauty.
By 1938 he had left a trail of tragedy and destruction behind him.  An unapologetic womanizer and adulterer, he had left his first wife and six children and run off to Europe with a neighbor’s wife.  After returning home, he’d moved in with his lover, setting up house in an impressive dwelling he’d designed himself, built on the brow of a hill in Spring Green, Wisconsin and named for a Welsh bard.
While away one day, his lover and seven other people, including her two children, were hacked to death by a deranged ax murderer.  The house was set on fire. 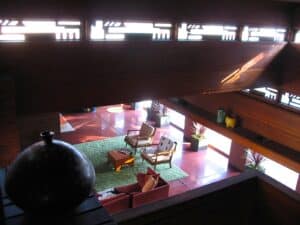 View from the interior balcony overlooking the main living area.  Click pictures to enlarge and see a slide show.

However, this did not deter him.  The architect was nothing if not persistent.  Setbacks seemed to roll off him when he focused on his craft.
He kept the house, restored it and moved back in with his new wife, a morphine addict.  Within a year he was cheating on her.  They divorced and he married again, for the third time.  Again he moved into the house.  Again it burned.  And again he rebuilt it.
To him the constant rebuilding, the refurbishing, the adding on was all part of his view of things.  His architectural philosophy was rooted in the idea of the “organic” structure, the building as part of the natural landscape, a landscape that was alive and ever changing, even if those within it had met their tragic ends.

Cold, self-absorbed, arrogant. All these words have been applied to Frank Lloyd Wright. But there is no denying the genius of America’s greatest architect.

His ideas about organic architecture were first manifested in the “Prairie School” of architecture, of which he was its chief exemplar.  Horizontal lines, flat roofs, overhanging eaves, ribbon-like horizontal windows, coming together to evoke the topography of the prairie.  Later, his bold organic style saw brilliant expression in masterpieces like Graycliff, situated on a high bluff overlooking Lake Erie, and Falling Water, a home built over a waterfall that came to be named the “best all-time work of American architecture”.
It was Falling Water that returned him to prominence at age 70 after a brief period in which his star had appeared to fade.  And Frank Lloyd Wright, a man who liked to be prominent, relished it, thought it his due, and sought it out.  Few would accuse him of being humble or modest.
So when LIFE Magazine approached him in 1938 to participate in an article called “Eight Houses for Modern Living” in which outstanding architects would design “dream homes” for four typical American families, he jumped at the chance, taking on the project with his usual single-mindedness, secure in his own genius and unperturbed by ancillary considerations, such as his client’s ability to pay for it.

View from the entry hall into the main living space. Wright created the concept of the great room 50 years before it became a common feature in American homes.

“Usonian” Does Not Mean Alien

As had been the case with Taliesin, his oft-rebuilt dwelling in Spring Green, Wright meant to build a house that would act as an expression of his architectural enthusiasms.  In this case, he was eager to introduce the concept of the Usonian home, a home designed for a middle class American family.
Usonian homes, referring to homes designed for the United States of North America (thus, Usonian), and therefore distinct from homes built for Canada or Mexico, should, as he saw it, include a large, open living space punctuated by strategically located fireplaces, and outfitted with built-in seating and tables.  The design was meant to promote family togetherness, to blend naturally with the surrounding landscape and to be affordable.  But his client couldn’t afford it. 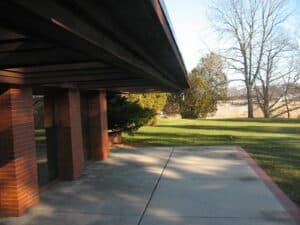 Wright situated the house on a marshy bend of the East Twin River. The horizontal lines, flat roof and overhanging eaves were designed to blend with the surrounding terrain.

Undaunted, Wright found another client for his LIFE Magazine dream house, a successful Wisconsin businessman named Bernard Schwartz who lived in the smallish town of Two Rivers.
Situating the house on a marshy bend of the East Twin River in Two Rivers, Wright modified the original design to incorporate local building materials like red tidewater cypress board, batten and brick.  He elevated the ceiling in the living area to allow for an interior balcony overlooking the main space, and added built in bookshelves as well as custom-made tables, chairs, hassocks, lamps and fruit bowls.
The final result, known as The Bernard Schwartz House or, alternatively, Still Bend, was a stunning example of Frank Lloyd Wright’s architectural genius – and it still exists today. 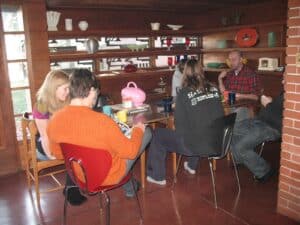 Lisa and Nick (left) and the rest of the gang in the dining room at Still Bend.  It felt like a privilege staying here.

To tour the Schwartz House is a pleasure in itself, but to reside in it, to call it home, is a unique privilege, if only for a brief spell.
I was given just such an opportunity by my friends, Nick Paredes and Lisa Brown, who rented Still Bend for three nights in December and invited a group of friends to join them.

Living in the Dream House

Living in a Frank Lloyd Wright home is like living inside a painting, and naturally sets one to reflecting on the man and his extraordinary talent. 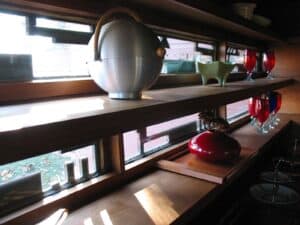 The dining room at Still Bend features Wright’s signature ribbon windows with geometric trim and built-in shelves.  Nothing lavish or overstated about this.

The first thing that strikes you is just how successful Wright was in using his design to draw people together.  Of course Wright envisioned a family occupying the 63 foot long living area that constitutes the airy main space of the house, but we were a motley crew: two single people, two dating couples, my wife and myself.  Nevertheless, we were gathered together, like a cozy family, before the open mantled fireplace at Still Bend, sipping wine and conversing, sensing that turning on the TV (a contingency Wright didn’t foresee or plan for in 1938) would be a kind of violation of the space.
That may seem a bit fussy, but the architect fully intended to use his design to manipulate its occupant’s behavior. 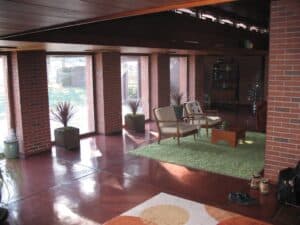 In the main living area floor-to-ceiling windows flood the room with light and provide a panoramic view of the river beyond.

Advertisements
An aspect of Wright’s character can be glimpsed in the way he utilized both positive and negative reinforcement to achieve his ends.  Not only is the main living space warm, sunny and inviting, but the bedrooms (with the exception of the master bedroom) are deliberately small, dark and cramped.  He didn’t want people hanging out in their bedrooms.
Also, Wright was not a fan of clutter.  The way he deals with this problem is by providing nowhere to put it.  Usonian homes are built on concrete slabs with no basement or attic.  Closet space is at a premium.  In many ways, Wright’s homes are at odds with the throw-away consumer culture that emerged after his death.

There is a zen-like quality to Wright’s homes that make you want to honor his vision. You gather before the fireplace and talk. You do not turn on the TV.

He prefers, instead, a handful of exquisitely designed pieces of furniture and knick-knackery designed to intermingle with the architecture of the dwelling, which is itself designed to blend with the surrounding terrain.  Everything is an organic whole.  And as the day progresses, the clerestory windows in the entry hall admit gradually rotating slants of light, imparting an ever-changing glow to the warm woody interior.
It’s almost as if he’s saying, “There’s plenty enough to enjoy in nature and art without cheap Chinese junk.”  Such a scold.  This is architect as tyrant.  But a tyrant who cared deeply about the people who occupied his spaces.  He wanted them to improve themselves through the vehicle of their quarters. And if you surrender to it, it does sort of uplift you.  There is a zen-like quality to Wright’s homes that make you want to honor his vision.  You do not turn on the TV. 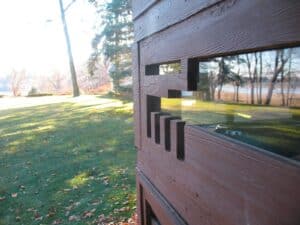 A marshy bend in the East Twin River seen in the reflection of a window at the Schwartz House a/k/a Still Bend.

In the main living area of The Schwartz House the floor-to-ceiling windows flood the room with light and provide a panoramic view of the river beyond.  At night, the stars can be seen through the broad expanse of glass, providing a serene backdrop to friends gathered around the fire, sipping wine.
The dining room and kitchen are separate spaces, modest in size, but comfortable enough.  The windowless kitchen is utilitarian, but warm, a place to get things done.  The dining room is an oversized breakfast nook with Wright’s signature ribbon windows.  Built-in shelves line the walls adorned with simple, elegant bowls and vases.  Nothing lavish or overstated about this.

Upstairs hallway leading to the second story bedrooms at The Schwartz House.

Advertisements
In designing such spare but agreeable spaces Wright was flying directly in the face of late 19th century expectations of what a home should be, while prefiguring the form and function of the middle class suburban home of the mid 20th century.  Wright’s earth-hugging Usonian homes with their sliding glass doors, concrete patios, attached car-ports and master bedrooms were the template on which suburban ranch homes of the 1960’s were built.
I grew up in such a home, never knowing that its progenitor could be found in these artful masterpieces rendered by a hardhearted, arrogant tyrant who dictated every aspect of the design right down to the trim used in the window frames, a man who used architecture as a way of manipulating others, yet behaved badly himself, a man who left a trail of tragedy and destruction behind him, yet gave America its own, unique form of residential architecture, which changed the suburban landscape, and eventually our perception of ourselves.
Living in his house, I began to comprehend how such a man could create a thing of such lasting beauty.

A placid, relaxing experience, and a place to reflect on great art and the people who make it.

Great artists are not always great human beings.  They are flawed and foolish like the rest of us.  But they have a license to create, unhindered, which others are rarely permitted.  And when they combine that license with a deep artistic vision and a perseverance to see it expressed purely and completely, they give us something that can echo through the culture.
Such audacity, perseverance and focus will naturally have its victims.  So I’m glad I never had to live with Frank Lloyd Wright.
But I sure did enjoy living in his house for awhile.

The entire 4 bedroom 2-½ bath Bernard Schwartz House (Still Bend) can be rented for as little as $350 per night (min 2 night stay).  It is also open for scheduled tours costing $10. 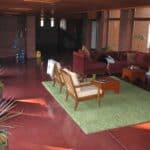