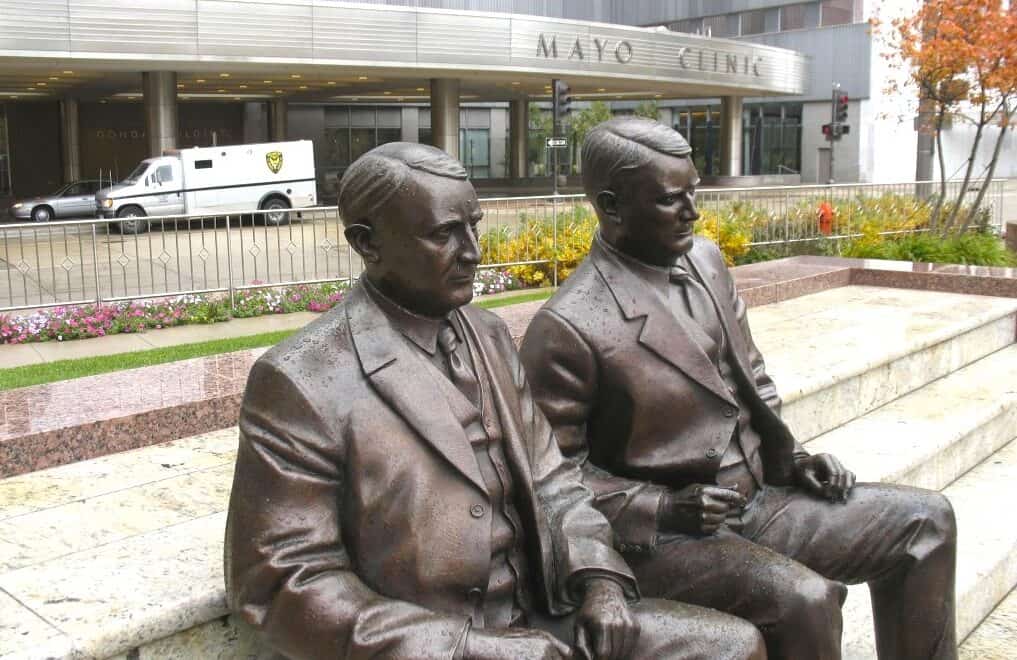 When a tornado devastated the small town of Rochester, MN in 1883 the medical community was hard-pressed to provide the care needed.  This led to concerted action.

It started with a disaster.
When the tornado struck, devastating the town of Rochester, wiping out a third of the town, killing 37 and leaving hundreds injured, a temporary hospital was erected and the hard-pressed medical community went to work treating the wounded.  It was hard work made more difficult by the lack of access to resources.
When the worst was over, Mother Alfred Moes, a Franciscan nun, approached the town’s principle physician, William Worrall Mayo, about establishing a hospital in Rochester, to circumvent the shortcomings imposed upon them by the storm.  The year was 1883.  She had been moved by a spirit of selfless devotion to her fellow man.

A Different Kind of Wealth 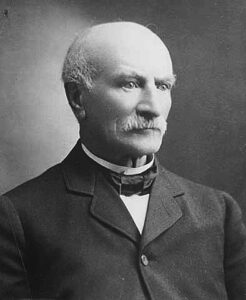 William Worrall Mayo left it to his two sons to develop St. Mary’s Hospital into the formidable Mayo Clinic.

Just six years later St. Mary’s Hospital opened and the seventy-year-old Dr. Mayo became the consulting physician and surgeon.  Only a few years later he retired, but by then he had assembled a well-rounded group of top-notch physicians that included eight of the best doctors in the region, including his two sons, Will and Charlie Mayo.
Dr. Mayo had one purpose, to be of service to others, to put the needs of his patients first, regardless of their station in life.  To provide for them with dignity and humanity.  His wealth of spirit was a different kind of wealth, and one that would act as the guiding principle of the Mayo Clinic for years to come.

In 1901 one of his sons, Dr. Will Mayo, a highly qualified surgeon in his own right, recruited a twenty-seven year old doctor and aspiring inventor with a reputation as an up-and-comer in the field of surgery.  It was a hire he would later call the best day’s work he had ever done.

By the 1920’s the Mayo Clinic had become renowned for its surgical expertise.

Dr. Henry Stanley Plummer revolutionized the practice of medicine.  Developing a simple, easily retrievable medical record system and inventing a cable-carrier system for circulating correspondence, Dr. Plummer laid the groundwork for integrated group practice and opened the door to specialization.  In addition, Dr. Plummer was at the forefront of X-Ray diagnostics, one of the earliest Americans to master the machine.
Four years later Dr. Plummer became the hirer, when he secured the services of Dr. Louis B. Wilson, another all-star of medical advancement.  Dr. Wilson developed a laboratory procedure to perform microscopic analysis of specimens for rapid diagnosis during surgery.  His method became the foundation for the use of laboratories in hospitals. 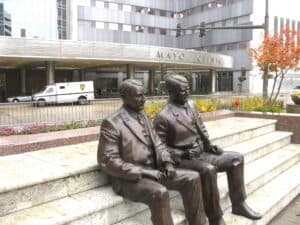 Bronze statues of doctors Will and Charlie Mayo preside outside the main entrance to the Gonda Building in downtown Rochester.

Advertisements
By 1914 St. Mary’s Hospital had established a national reputation for being at the cutting edge of surgical medicine and was redefining what a hospital could be.  All of this because of a tornado.

What it Takes to be the Best

Today the Mayo Clinic in Rochester, MN is ranked the #3 overall hospital in the United States.  It is #1 in Gynecology, Gastroenterology, kidney disorders, and endocrine disorders.  It is #2 in Orthopedics, Pulmonology, heart surgery, and Neurology.
As a measure of its mastery consider this: Less than 3% of American hospitals are ranked in the top ten in even one of sixteen medical specialties surveyed for.  Mayo Clinic is ranked in the top ten in all but one. 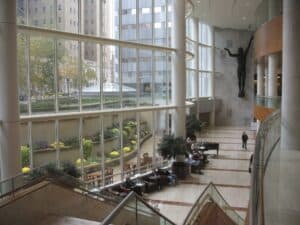 The sunny atrium of the Gonda Building is overseen by the sculpture Man and Freedom by Ivan Mestrovik, one of dozens of pieces of fine art on display throughout the institution.

Much of its success can be attributed to the core values of the Mayo family, their devotion to service, and their burning commitment to the science of medicine.
From the beginning, the sons Will and Charlie Mayo placed an especially high premium on research.  They felt that advancing medicine was one of the best ways to serve patients better.  In 1922 they opened the Mayo Institute of Experimental Medicine in downtown Rochester.  Twenty-five years later researcher Edward Calvin Kendall identified cortisone there, a steroid widely used today to reduce pain and swelling from a variety of ailments.  Kendall won a Nobel Prize for his discovery. 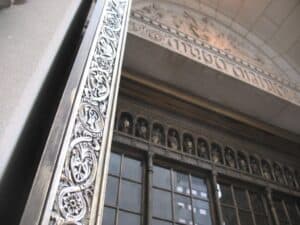 The ornate entry of the Plummer Building, named in honor of Henry Stanley Plummer, one of the groundbreaking physicians on Mayo’s early staff.

From their earliest involvement, Will and Charlie also put a heavy emphasis on education.  Even before they founded the Mayo Properties Association and combined St. Mary’s Hospital with the research center and other downtown Rochester real estate into what would become the citywide campus of the Mayo Clinic, they donated two million dollars to found the medical school at the University of Minnesota, another act of selfless generosity that has benefited countless people over the years.
In 1972 this focus on education was carried forward when the Mayo Medical School was established, a highly selective, top ranked medical school that is prepared to fund, if necessary, the entire tuition needs of the small number of applicants it accepts.
The Mayo Clinic has never been one to quibble about costs when the advancement of medicine is at stake.

This Dale Chilhuly glass sculpture suspended from the ceiling of the Gonda Building is one of several outstanding art pieces that grace the public spaces of the Mayo Clinic.

Deep in its culture, the Mayo Clinic has always put people and outcomes ahead of profit, and that, in turn, has led to unqualified success in every aspect of its mission.
Ironically, it has also made the institution highly profitable.  In the spirit of altruism, and in keeping with its not-for-profit status, all of that profit is returned back to the institution to fund further research and to subsidize a few bells and whistles like the Mayo Clinic Center for Humanities in Medicine.
In support of the ideal that the needs of the patient come first, the Center puts on musical performances, theater events, lectures and workshops for the benefit of patients, visitors and staff.  While I was there an impromptu piano concert occurred in the sun-filled atrium near the main lobby, a pleasant and uplifting experience and one calculated to brighten the moods of the sick and ailing. 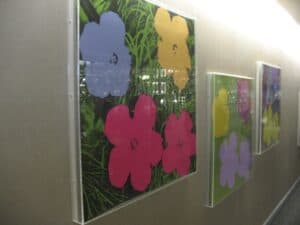 Throughout the medical complex, which today consists of 16 buildings in downtown Rochester, art contributed by some of the world’s most renowned artists is on display, including several Andy Warhol paintings and a stunning Dale Chilhuly glass sculpture that draws oohs and ahs from passersby.
Step outside and the architecture of downtown Rochester is further testimony to the influence of Mayo.  The handsome Guggenheim Building, part of the Mayo campus, is a sturdy 21-story modern structure with graciously curved corners.  The terra-cotta trimmed Plummer Building with its elaborate bronze doors, ornate trim and 56-bell carillon is the centerpiece of downtown Rochester.  The curvaceous Gonda Building is a massive monolith of reflective glass that houses the main lobby and public areas of Mayo Clinic. 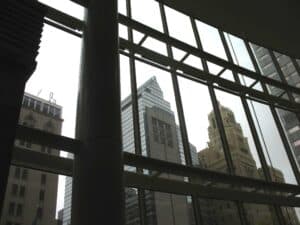 The buildings of downtown Rochester, MN seen from inside the atrium of the Gonda Building at the Mayo Clinic.

Art, architecture, music and culture, when taken together with research, education and cutting edge medicine, all adds up to making Rochester one of the best small cities in America to live according to Money magazine, American City Business Journal, Kiplinger’s Personal Finance, and US News and World Report.  With a median income of $58,000 and an unemployment rate less than half of the national average, the city is thriving, even in the face of a nationwide economic recession.
In large measure that’s due to the Mayo Clinic, which employs more than a third of the citizens of Rochester, keeping on staff more than 3,700 highly qualified and highly paid physicians and scientists. 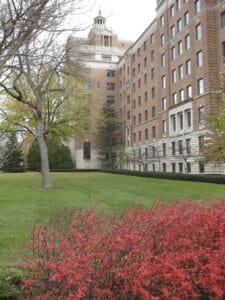 St. Mary’s Hospital in Rochester where the Mayos first put their ethos of compassion and generosity into practice and built one of the most fruitful institutions in the country.

To the eyes of a fiscal conservative all of this unnecessary largesse must exact a dreadful cost.  Medicare must be being billed a staggering amount for the likes of such generosity.
Not so.  The Mayo Clinic has earned a reputation for delivering high quality medical care at low cost.  In fact, one study found that costs paid by insurers to treat Medicare patients at Mayo was only 54% of that charged by comparable hospitals and clinics.
So successful has this model been that the Mayo Clinic has spawned two offshoots, the Mayo Clinic in Jacksonville, Florida and the Mayo Clinic in Scottsdale, Arizona, bringing economic boomlets to those towns as well.
It all started with a tornado, a disaster that would’ve sunk many communities, but which sparked a spirit of altruism in Rochester that found form and substance in one of the most generous and fruitful institutions in the country.
In a culture that glorifies empty-headed materialism and the mad dash for profits, in a country that disdains charity as encouraging laziness and redistributing wealth, there is much to be learned from Mayo where a single minded devotion to the well being of others lifted an institution to the highest levels of success.
It should be an inspiration for us all. 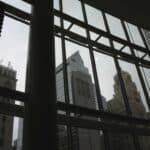