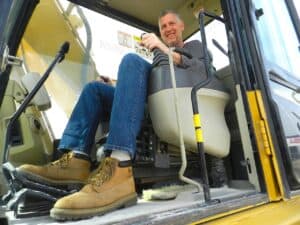 Digging in in Las Vegas. Operating the Hydraulic Excavator at the Heavy Equipment Playground.

Grinning, I worked the levers and lowered my bucket. Drawing the teeth down and back, I chewed my first hole in the soil of Las Vegas, one of several I would dig over the next 90 minutes.  Operating the 315CL Caterpillar Hydraulic Excavator at the Heavy Equipment Playground set me to thinking about all the foundation builders who had been here before me.
Las Vegas has always been about groundbreaking new ventures.

Down to Earth in Sin City

The first groundbreaking in Las Vegas was probably by John C. Fremont who dug the post holes for a fort built here in the 1840’s when the area was still a part of Mexico.  The fort was occupied intermittently over the next couple of decades and ultimately abandoned. 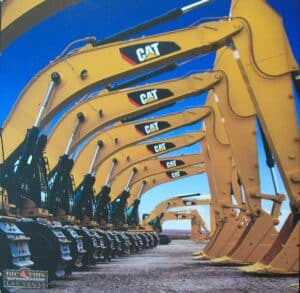 At Dig This: The Heavy Equipment Playground you can operate a full sized bulldozer or excavator for 90 minutes.

Mormon missionaries came to the area in the 1850’s and dug some holes of their own, but finding the area inhospitable, left without much fanfare. Their holes soon filled up with blowing sand. After the Civil War, a wheeler-dealer named Octavius Gass claimed the area and began digging trenches to irrigate his fields. He established a vineyard here in the 1870’s and then lost the whole thing to creditors in the 1880’s who subsequently sold it to the railroad. The railroad spurred settlement by offering land at $1.25 per acre (today an acre of land on the Strip costs $11 million). By 1895 farmers were digging holes for wells and irrigation. The wells were so productive that Las Vegas soon became a water stop for the railroad and in 1911 the tiny town of Las Vegas became officially incorporated. 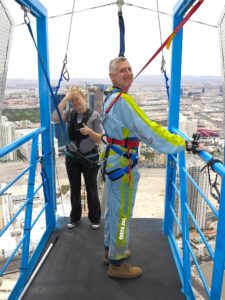 Standing at the edge of a platform at the top of the Stratosphere Tower, getting ready to jump.

That same year, three thousand miles to the south, 102 large, railroad-mounted steam shovels were being deployed by the US Army Corp of Engineers to dig the Panama Canal. The steam shovel, which had been invented in 1839 had never before been marshaled in such numbers to achieve such ends. 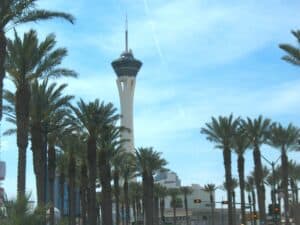 Since 1993 the Stratosphere Tower has been the tallest structure in Las Vegas, equivalent to 108 stories. For a fee you can jump from it.

The Stratosphere is only the most recent of a long line of structures that have worn the title of “tallest in Las Vegas”.  Before the Stratosphere, Fitzgeralds Casino had the honor, and before that the Las Vegas Hilton was the big daddy.  All through the 1960’s the Diamond of the Dunes Tower was the tallest, and way back in 1954, the Castaways Hotel and Casino grabbed the prize as the first “skyscraper” in Las Vegas, topping out at a whopping 19 stories.

The Castaways had a shady past, leased, as it was, by Moe Dalitz, a mobster who was part owner of the famous Desert Inn.  Dalitz had gotten his piece of the Desert Inn by following the playbook of one of Las Vegas’s earliest and most notorious gangsters, Bugsy Siegel. 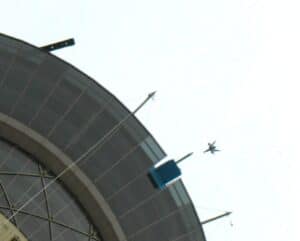 Leap of faith. Jumping from the top of the Stratosphere Tower requires a certain amount of pluck, as well as an implicit trust in the people running the thing.

Siegel can be credited as the one who first thought of turning Las Vegas into a luxury resort destination. All the groundbreaking that was to come – all those power shovels and excavators digging holes – can be attributed to Siegel’s unswerving determination to make the Flamingo Hotel the glitziest, swankiest hotel in the west. By most accounts it cost him his life. The cost overruns involved in its construction drained the pockets of his mob investors. In 1946 The Flamingo opened. In 1947 Siegel was killed.

But the precedent of deep pocketed mobsters buying controlling interests in glitzy casinos had been established, and that, along with legalized gambling in Nevada, struck the spark that ignited the boom that followed. 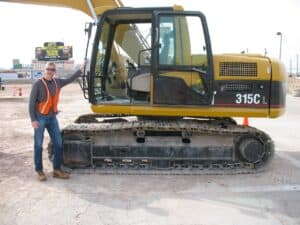 Cat lover. Getting ready to dig in the giant sandbox with my very own excavator.

Today Las Vegas boasts 124,000 hotel rooms, 197,000 slot machines, more than 100 casinos, and a burgeoning number of fun and unique attractions that do not involve wagering money.
This is the new Las Vegas, dependent less on the allure of easy money and more on the appeal of clever attractions.

Routinely earning the top spot on Trip Advisor’s list of Las Vegas amusements is Dig This: Heavy Equipment Playground, every eight-year-old boy’s dream of digging in the dirt writ large. 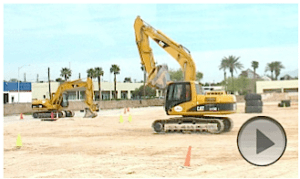 Check out this point of view video of me working the excavator at Dig This.

At Dig This you can operate a full sized bulldozer or excavator, dig a 6-foot hole in the ground, pick up and stack enormous tractor tires, and practice more delicate work like plucking a basketball off the top of a traffic cone.

All of this is remarkably exhilarating and your 90 minutes at the controls goes by quickly. Maybe that’s because you’re pretty much on your own, and you have to focus. You operate these bad boys all by yourself.

After a preliminary orientation, you don a headset and climb into the driver seat to follow the directions of your instructor by audio. He tells you which levers to push and pull to get your excavator to do what you want. If you go with someone else, you both get your own earth mover and an element of competitiveness takes over, adding to the fun. It’s the new way to put your money on the under in Las Vegas. 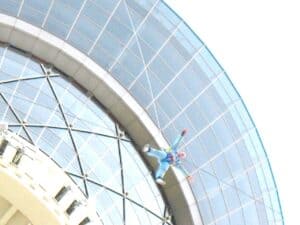 At Sky Jump you drop fast and the plunge is thrilling.

As a companion to the down-to-earth pleasures of Dig This, you can try the sky high thrills of Sky Jump at The Stratosphere Tower. After donning a jump suit and getting some preliminary instructions, you climb 108 stories in an elevator and step out 1,150 feet over the Las Vegas Strip.

Ahead of your jump you are clipped into a high-speed “descender” and then led to the edge of a platform where you leap. Your descent is by way of a pulley and cable, like a vertical zipline, which allows the operators to control the speed of your descent. You drop fast and the plunge is thrilling but you are slowed before you land so it’s easy to land on your feet. It’s as exciting as betting and a lot less risky.

Since 1993 The Stratosphere Tower has held the title of tallest structure in Las Vegas, but that will probably be challenged before long. In the ongoing game of one-upmanship that is the wild world of Las Vegas development three buildings are planned or under construction that will rise to more than 600 feet, making them the second, third and fourth tallest buildings in the city, further altering the Las Vegas skyline.  In this city, which is all about groundbreaking, there is yet more groundbreaking to come.

Because Las Vegas is a place conceived and defined by risk, digging deep and soaring to new heights is as much a part of its DNA as gambling and showgirls. Today two of its most interesting new attractions carry forward that decades old legacy. Sky Jump at The Stratosphere Tower and Dig This: Heavy Equipment Playground are the new way to play the over and under in Las Vegas. 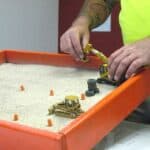 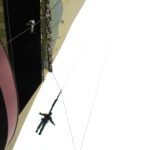 Image credits:
All images by Malcolm Logan, except Row of excavators, Dig This Las Vegas 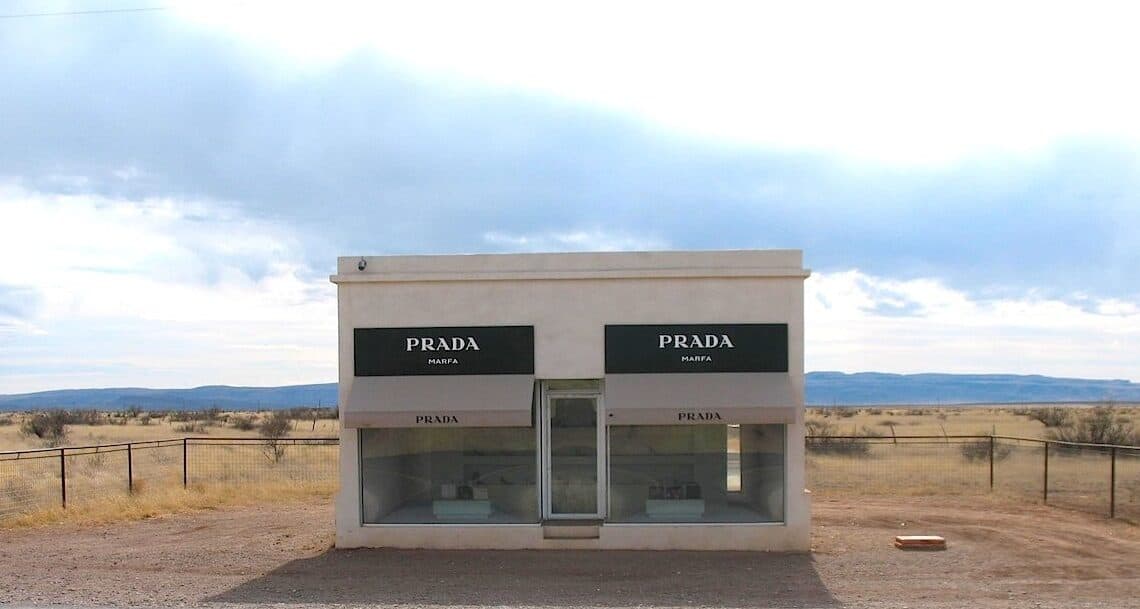 Way, Way Out There: The Art and Artlessness of Marfa, Texas