Learning to Love the Mob: A One Day Vacation in Las Vegas! 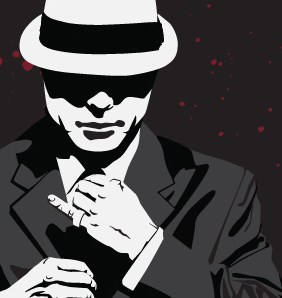 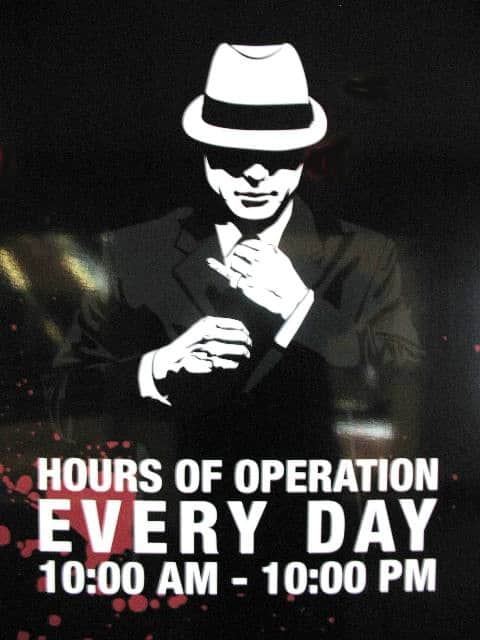 When Chicago mobster Anthony “the Ant” Spilotro started burglarizing businesses in the Las Vegas area, the federal government and the Las Vegas gaming commission had seen enough.  So had the mob.  Spilotro had been screwing up a good thing, drawing unwanted attention to mob influence in the city.  So they beat him with a baseball bat, strangled him and buried him alive.  The mob was nothing if not thorough.
Las Vegas had long been home to the mob.  Heck, modern Las Vegas with its strip of flashy casinos and flamboyant floor shows was practically invented by the mob.  Mobsters had owned or been involved in a long line of casinos from the Flamingo to the Stardust to the Sands; and for 30 years they had kept things pretty safe, not wanting to frighten away gamblers by earning a reputation for violence. 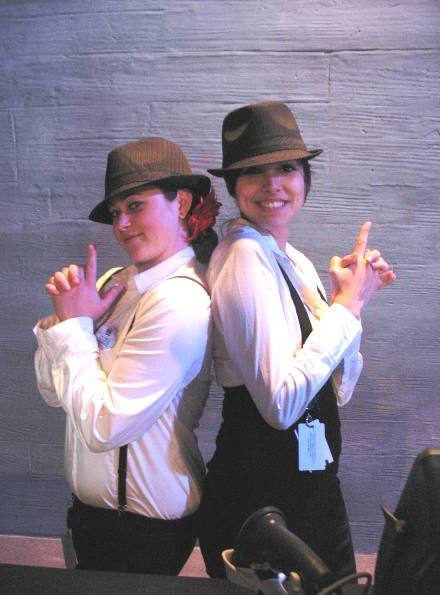 A pair of gun molls take your money. Then, if your good, they'll give you tickets.

But in 1976 Spilotro changed all that by using his mob connections to prey on the citizens of Las Vegas.  From then on, the feds had it out for the mob, and the mob’s influence in Las Vegas went into decline.

I learned all this at the Tropicana’s new attraction The Mob Experience, a 26,000-square-foot, multi-media jaunt through sin city’s shady past.  This was the first stop on my one day excursion to delve into the cigar-chomping, machine-gun-toting reputation of the town and I was not disappointed.
The Mob Experience at The Tropicana (3801 Las Vegas Blvd S) walks you through the history of the mob in Las Vegas using a combination of film, video and live actors.  You choose your tour guide from a selection of famous film mobsters (James Caan, Joe Pesche, Robert De Niro) and they stand before you in holographic form, wielding their tough guy personas, explaining how the mob got started, how it came to Vegas, and what happened next. 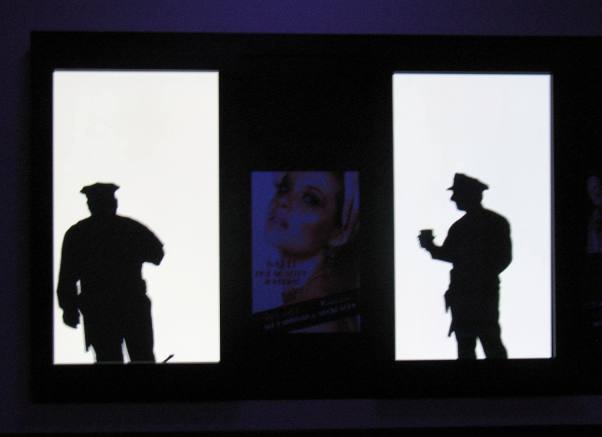 In this scene two cops bemoan the crimes of Spilotro.

Advertisements
The attraction engages you by making you part of the story.  As you follow your guide – the hologram moves off in a certain direction, and you trail along after it – you are confronted by live actors, playing parts.  Early on you are told to knock on the door of a speakeasy, a mail slot opens and you are asked for a password.  When you are admitted, a street tough gives you an envelope full of money to carry to the boss.
When you meet the boss, a truly intimidating goombah holding court over a plate of pasta, he accuses you of taking some of the money and warns you not to say a word to the cops.  Not surprisingly, in the next scene you are confronted by the cops and interrogated.  How you respond to these confrontations determines which of four endings you will see.  In one, you become a made man.  In another, you get whacked, and so on. 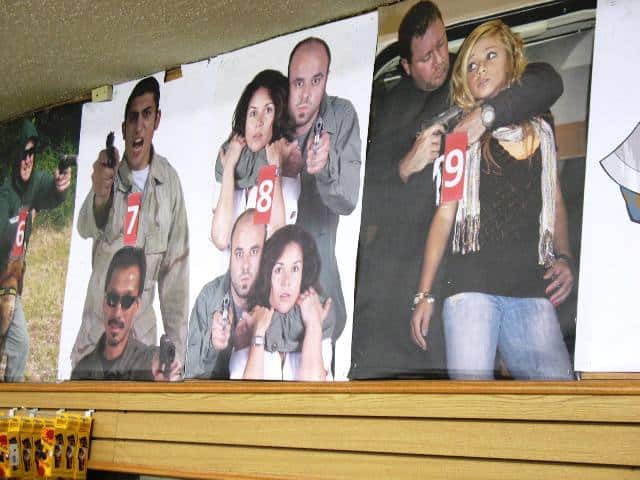 At The Gun Store you get to choose your victim from a selection of dirtbags and greaseballs.

For all its Disneylandish charms, I found the attraction entertaining and educational.  Throughout, there are display cases with artifacts from the mob era, including weapons, Polaroids and hand-written personal letters.  Lucky Luciano’s mint condition Studebaker is parked in one room dedicated to his exploits.  Back lit panels tell the stories of gangland figures like Bugsy Siegel and Meyer Lansky.  The actual furniture from the mobster’s homes is arranged into walk-through set pieces, while 8mm home movies of their personal lives flicker in the background.

After absorbing Vegas’s storied mob past, I was ready to see what it felt like to whack somebody.  So I headed down Tropicana Blvd. a few miles to The Gun Store (2900 E. Tropicana Ave.) where for a dollar a shot, I was invited to fire a Thompson machine gun at a victim of my choice.  The victims were printed on targets and although I was tempted to 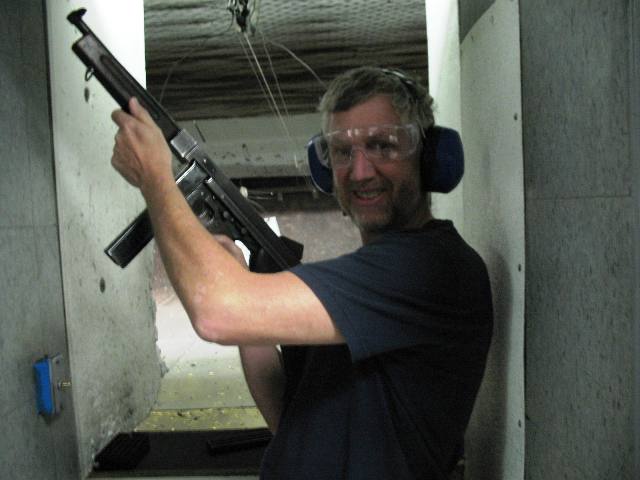 Malcolm Logan, the author, brandishes a weapon - and manages not to burn himself on the barrel.

take out a thug that appeared to be menacing members of an innocent family, I chose to do what the majority of the other customers were doing, and accomplish something the US military has so far failed to do.  I was going to kill Osama bin Laden.
But just like the military I ran into unexpected obstacles in pursuit of my objective.  Specifically, I had to wait in a slow-moving line with about 40 other people.  After more than an hour, I finally donned the ear muffs and safety glasses and was led onto the range which smelled sharply of gunpowder and was littered with spent shell casings.  My instructor showed me how to hold the gun, how to align the sites and how to avoid burning myself on the barrel.  Then he reeled the picture of Osama bin Laden out about 30 yards and bid me bang away.
I surprised myself two ways.  I blasted old Osama pretty good, even putting one right between his eyes.  But I found the whole experience rather dull.  This would’ve come as a surprise to the fellow standing behind me in line who had been of the opinion that all men are genetically predisposed to get excited at the prospect of firing a gun. 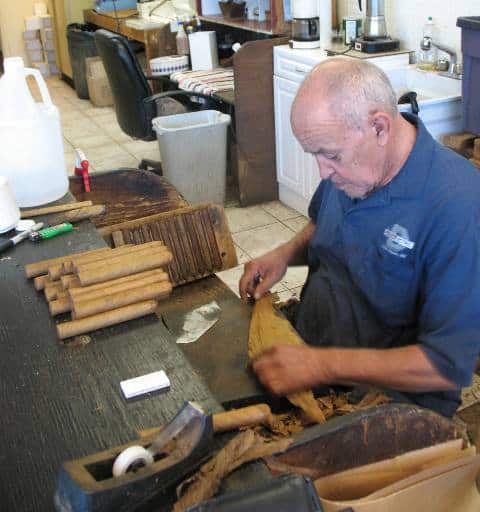 One of the expert cigar makers at Don Pablo Cigar Company.

I have fired a gun before and found the experience less than memorable, the mechanical bang and buck of a gun does nothing for me, and tearing holes in a sheet of paper with bits of lead is pretty much a yawn.  The fact that this was a machine gun and not a mere pistol only multiplied the bleh factor, and I was annoyed that the shell casings kept popping up and dropping on my head.

Smoking a Stogie and Chasing the Action

If I was a failure as a hit man, I could at least try to look the part.  So I drove myself over to the Don Pablo Cigar Company (3049 Las Vegas Blvd S) and watched as the two in-house Cuban cigar makers rolled leafs of tobacco into handsome stogies.  A chat with the owner and a visit to the humidor resulted in the purchase of fine Dominican, made on premises, which I vowed to smoke later over a glass of scotch in a swank casino, as a right and proper Las Vegas mobster would do. 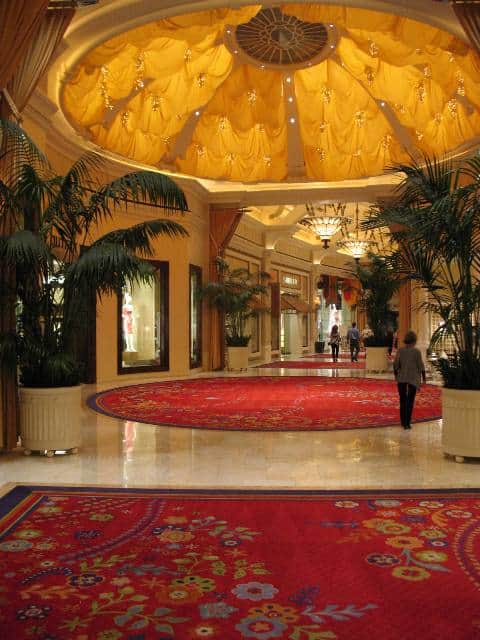 Advertisements
I chose for my casino The Wynn (3131 Las Vegas Blvd S), a towering 45 story hotel casino complex with a sweeping copper colored façade, the tallest building in Las Vegas when it was erected in 2005 and the most recent brainchild of Steve Wynn, the visionary founder of The Mirage, Bellagio, and Treasure Island.
Gambling is a part of the mob experience in Vegas, but most mobsters, working behind the scenes, were keenly aware that table games and slots were for the rubes.  On the other hand, betting the ponies or wagering a few clams on a sporting event left plenty of room for luck.  So I vowed to see the bookmaker at The Wynn and plunk down a bet on a college basketball contest, a tournament tilt between Missouri and Texas A&M.
While the Wynn was lovely in the usual way – marble floors, chandeliers, waterfalls bathed in colored lights – nothing justified the exorbitant prices.  I paid $12.00 for a scotch and $22 for a plate of pasta, and I didn’t dare light up a cigar in public!  Back when the mob was running Las Vegas everything was so much easier.  Those were the days of .99 breakfast buffets and $25 hotel rooms, and everybody smoked.  I began to pine for the bygone days of wise guys and counting rooms and the occasional vicious beating with a baseball bat. 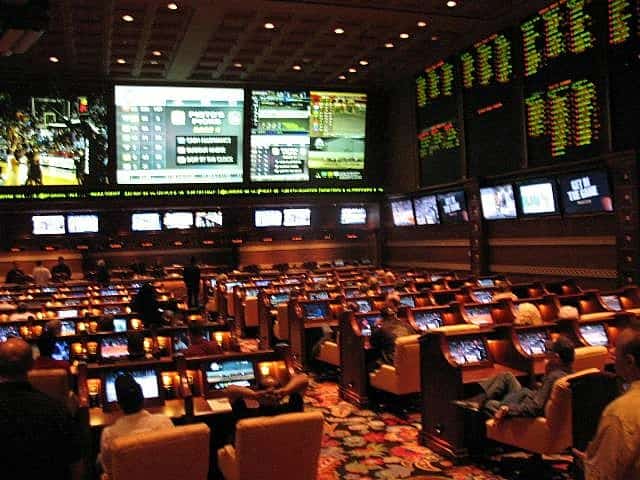 The sports book at The Wynn. Betting with my heart and not my head.

Missouri lost the game – badly.  I made the cardinal error: I bet with my heart, not with my head.  This is not for me.  Truth be told, I make a horrible gangster.  I gamble poorly, don’t like shooting a gun, and can’t find a decent place to light a cigar.
But I certainly enjoyed my day in Las Vegas exploring the legacy of the mob and all that it implied, and when I return, I’ll know one thing for sure.  In the words of the immortal Paul Castellano, “This life of ours, this is a wonderful life. If you can get through life like this and get away with it, hey, that’s great. But it’s very, very unpredictable. There’s
so many ways you can screw it up.”
Truer words were never said.
____________________________