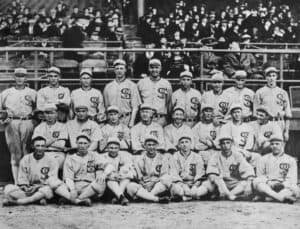 Group shot of the 1919 White Sox. They would after this year be known as the “Black Sox Scandal” team, due to the allegation that eight members of the team accepted bribes to lose the 1919 World Series to the Cincinnati Reds. These eight players, pitchers Eddie Cicotte and Claude “Lefty” Williams, first baseman Charles “Chick” Gandil, shortstop Charles “Swede”Risberg, third baseman George “Buck” Weaver, outfielders Joe “Shoeless Joe” Jackson and Oscar “Happy” Felsch, and pinch hitter Fred McMullin, were banned from the game of baseball for life. 1919

Entrance to the mezzanine at the Auditorium Theate

A crowd gathered to watch the drummers outside the

At the Poinsettia Show in the Conservatory at Linc

Our Christmas binge began on Friday night when we

Getting ready for the Santa Shuffle 5K, the first

A father stands with his son before the Macy's Chr

Heading out to go surfing at Nags Head Beach in th